Magistrate: Blackwell's 17-month case against MSU's Mark Dantonio, others should be tossed out

A federal judge will take up the recommendations in the coming days.

Magistrate: Blackwell's 17-month case against MSU's Mark Dantonio, others should be tossed out

A federal magistrate in west Michigan is recommending a full dismissal of the lawsuit against Mark Dantonio and other former Michigan State officials, saying the lawyers for Curtis Blackwell have made mistake after mistake and attempted to "harass" the former football coach in a case that dates to November 2018.

Blackwell's lawyers' "inappropriate conduct has marred the history of this case," Berens wrote. 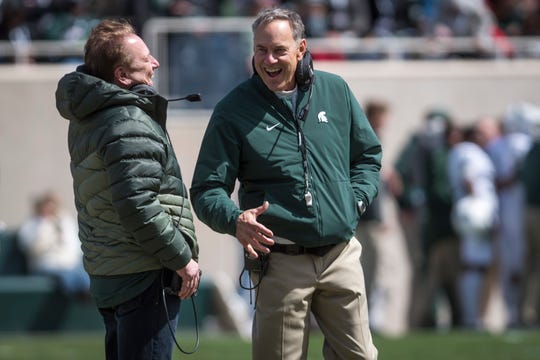 A federal judge is expected to rule on the recommendations in the coming days. Legal experts say almost always, the judge will side with the magistrate.

The judge did not recommend dismissing Blackwell's wrongful-arrest claims against two MSU Police detectives, but did say Blackwell's lawyers, Thomas Warnicke and Drew Paterson, should be removed from the case, and that Paterson's conduct calls for a hearing before a U.S. district judge to determine if Paterson should be disciplined.

"I think the opinion speaks for itself," said Thomas Kienbaum, an attorney for Dantonio and the defense.

Blackwell's lawyers didn't immediately respond to requests for comment from The News.

Blackwell was MSU football's recruiting coordinator from 2013 until May 2017, when he was let go for what Dantonio called "philosophical" differences.

SPECIAL REPORT: Recruiting trouble: Inside the sex assault scandal that threw MSU football for a loss

Blackwell said he was made the scapegoat in the wake of a January 2017 on-campus party at which three football players allegedly sexually assaulted a woman in the bathroom of an apartment.

He was never charged with a crime.

Blackwell's lawyers recently filed another lawsuit in state court, alleging racial discrimination for his dismissal. The magistrate said in the filing Friday that Blackwell's attorneys used an unnecessarily long discovery period in the federal case in order to build on the eventually filed state-court claims, which the federal court had denied them permission to file in 2018.

During discovery for the federal case, Blackwell's lawyers deposed Dantonio, Hollis, Simon, current athletic director Bill Beekman, the two MSU Police detectives and a number of others, and were seeking a written deposition with Auston Robertson, the former MSU football player who blew the whistle on the apartment incident, and three months later was accused of rape and now is serving a 10-year sentence in the Upper Peninsula. Robertson's checkered history of alleged sexual misconduct, and Dantonio's recruitment of him despite his knowing of incidents that led to his expulsion from his high school and high-school football team, played out in detail in court filings.

Then in early February, Blackwell's lawyers put in public filings allegations of NCAA violations by Dantonio, even adding a photograph taken at a recruit's house that showed Dantonio and Blackwell with the highly ranked recruit (as well as a photo of the breakfast they ate), when Dantonio said Blackwell wasn't allowed to recruit off-campus and never did. Blackwell's lawyers also alleged Dantonio broke NCAA rules by securing employment for parents of high-profile recruits.

Dantonio retired hours after the allegations went public, but said the case had "zero" to do with him calling it a career after 13 mostly successful seasons at Michigan State.

That initial filing of alleged NCAA violations by Blackwell's attorneys seemed to be among the final straws for the magistrate, who called the allegations irrelevant to the case.

claims alleged in this case, Plaintiff Blackwell’s attorneys have repeatedly misused court process to elicit information unrelated to his case and then have publicly filed that information, at least once in violation of a court order," Berens wrote, referencing Paterson's filing of one police officer's deposition transcript, which the parties agreed to keep sealed. That act earned Paterson a $10,000 fine.

Berens added Blackwell's attorneys used the discovery period "not to adduce support for the narrow claim Plaintiff alleges against the MSU defendants in this case, but to harass the defendants and to build a case they have now filed in state court."

Berens also critiqued the lawyers' deposition of Dantonio and their seeking of an additional one hour and five minutes with him. Dantonio's lawyers have argued that if Blackwell's attorneys hadn't asked irrelevant questions, they would've gotten their full seven hours with him during the January deposition.

Also criticizing Blackwell's attorneys, Berens referenced several cases that Paterson has been involved in and receiving sanctions and threats of disciplinary action.

Blackwell's legal team also filed a protective order against the defendants' lawyers attempt to get a second deposition with Blackwell. The problem was, the lawyers weren't seeking one. 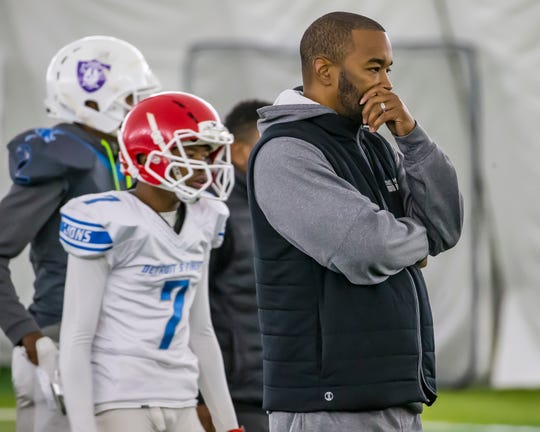 Curtis Blackwell was on staff at MSU from 2013 through 2017. (Photo: Dave Reginek, Special to The Detroit News)

Paterson, Berens wrote, violated federal rule "by filing false and misleading papers with the court, by failing promptly to correct those material misrepresentations, and by failing adequately to investigate the factual assertions in his filings." That behavior warrants sanctions, too, Berens wrote.

Warnicke said he shouldn't be dismissed for Paterson's misdeeds, but Berens said as lead counsel, all actions fall on his shoulders, too.

Concern of the actions of Paterson have been public for quite some time, and even led to high-profile attorney and NCAA expert Tom Mars quitting Blackwell's counsel, just days after he agreed to join the team.

The case against MSU Police detectives Chad Davis and Sam Miller should continue, Berens said. Blackwell is seeking up to $5.5 million from the cops, to cover lost wages and future earnings. Lawyers for the police detectives have been battling in court trying to secure financial statements from Blackwell's Sound Mind Sound Body football camp, in an attempt to prove he's not losing wages.

It was never stated how much Blackwell was seeking from Dantonio, Hollis and Simon, whose legal bills were being paid for by Michigan State. Berens also recommended Blackwell's team be responsible for Dantonio and Co.'s legal bills, should the federal judge toss the case.

The state case, filed this month with a 112-page complaint, alleges racial discrimination and breach of contract, and is against Dantonio, Hollis, Simon and current athletic director Bill Beekman. The complaint cites the state's Elliott-Larsen Civil Rights Act. Blackwell claimed that while on suspension and before he was let go, MSU trustee Joel Ferguson said he would be taking the fall because he was black; in response, Ferguson has told The News that's total "bull-(bleep)". Blackwell's lawyers also point out that the university was quick to hire an independent investigator, the Jones Day law firm, to look into how the department handled the sexual-assault allegations, but hasn't hired one to investigate how former trainer Larry Nassar, who is white, molested young girls and women for years before he finally was ousted by Michigan State. Nassar is serving essentially a life sentence for actions that have cost the school $500 million in payouts.

Blackwell, who made $129,000 from MSU at the time of his dismissal, declined to be interviewed by Jones Day, whose final report cleared everyone in the football department of wrongdoing except Blackwell.

The state filing included one more allegation of NCAA violations, Blackwell's team saying Dantonio once ordered his staff to secretly record video or audio of an upcoming opponent's practice without permission.

Kienbaum declined comment on the state case this month, saying it wasn't clear if he'd be representing Dantonio and Co. in that jurisdiction. He now confirms he will be, but declined to comment.