Jay Johnson emphasized that the bottom line is scoring over giving his offense a label.

East Lansing — After almost four years of offensive ineptitude, Michigan State fans are ready to see the Spartans put some points on the board.

With the hiring of Mel Tucker to replace Mark Dantonio, who stepped down as head coach after 13 seasons in early February, there wasn’t much of a nod to a shift in philosophy. After all, Tucker, who was the head coach at Colorado last season, has spent the bulk of his career as a defensive coach, including as a coordinator in the NFL and the highest levels of college football. 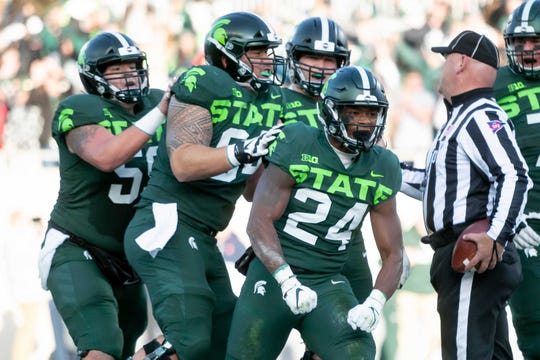 That, of course, made the hiring of an offensive coordinator important for Tucker, who opted to bring Jay Johnson with him from Colorado in an effort to bring some life to the Spartans’ offense. What that might look like is tough to envision during a spring without any work on the field, but Johnson emphasized that the bottom line is scoring over giving his offense a label.

“What we want to be is very multiple,” Johnson said during a conference call on Wednesday. “Multiple in how we do things, the tempos we play with, the personnel we play with, the formations we play with. So trying to be very multiple, but at the end of the day, it's got to be a high level of execution, and in the brief time in person that I’ve had with the guys, that was my really focal point. At the end of the day they’ve got to be able to do what we're asking them to do, and in those things, I'm looking to be very multiple.

“Some people would say, ‘Well, Coach, you want to be balanced?’ Well, sure, everybody wants to be balanced. But at the end of the day, I think it's important that you do what you need to do to win the game. In this day and age you’ve got to run it extremely well and you have to throw it extremely well. So, we're going to do both. In some games we might lean a little bit more on the throw, and other games we might need a little more on the run. Hopefully we’ll be as multiple and balanced as we can and put some points on the board.”

That would be a welcome change for the Spartans, who had a record-breaking offensive season in 2014 and saw only a slight drop-off in the playoff season of 2015. Points have been hard to come by, though, over the subsequent four seasons.

Last season, Michigan State was 105th in the nation in scoring at 22.4 a game even after a coaching shuffle the previous offseason.

Johnson, who was in his first season as Colorado’s offensive coordinator last season after a year with Georgia as an offensive assistant, didn’t fare much better with the Buffaloes. They scored 23.5 points a game, good for 100th in the nation, and were 83rd in total offense at 388.5 yards a game.

At Colorado, Johnson was able to find balance on offense running primarily out of spread formation. But personnel matters, and having the players to execute is the biggest challenge. It would seem to be an upgrade in that area at Michigan State, but Johnson will have to find a new quarterback while the offensive line and running attack has been a weakness the last few seasons.

Not getting the time to evaluate on the field in the spring makes things challenging for the entire staff and could push some of that work into preseason camp.

“(Normally) we’d be using this time to kind of introduce things and get everybody familiar with things,” Johnson said. “So since we're missing that, I think we're gonna have to be pretty cautious in how we approach it and kind of scale back so we can get a very good evaluation on the guys, and the only way you can get a good evaluation is I gotta know what they're doing.

“So there’s that fine line to have enough that we need to do to obviously score points at the end of the day and put our program in a position to be successful. But then we also need to be able to evaluate kids, so I think it will probably be scaled back and maybe a little bit different approach and probably some different focuses as we move into fall camp.”

Most of that evaluation will clearly be focused on the quarterback position. Brian Lewerke was a three-year starter, leaving the current quarterback room short on experience.

Junior Rocky Lombardi is the only one with any starting experience while sophomore Theo Day has seen a handful of snaps. Redshirt freshman Payton Thorne will be in the mix and freshman Noah Kim will be on campus before preseason camp starts.

Johnson, who also coaches the quarterbacks, had some time with the group before things were shut down, forcing him to focus more on the mental aspect of the game with his quarterbacks. Once they get back on the field, Johnson will have a better idea of where the quarterback race stands.

“I'm excited about it,” Johnson said. “Obviously, we’ve got to kind of be able to put it all together and we don't have a returning starter. I know Rocky's had a few starts, but the interesting piece, which nobody knows the answer even if we had spring ball, is what's going to happen when the lights come on Saturday at Spartan Stadium? What’s the end result? Can we take the mental approach with the physical approach and get it done when we need to on Saturday? So we'll miss that a little but I'm really excited about what they bring to the table.”

Overall, missing spring practice is not ideal for any program, let alone a staff in its first season. However, Johnson believes the Spartans are making the most of their time as they do their work in front of the computer these days.

“It’s been a challenge,” he said. “But I do really feel kind of good where we're at actually because I feel really strongly about our offensive staff. We've got a lot of veteran guys in there that have done some things, and so I feel we're very much on the same page.”