Michigan State basketball owns a pair of national championships and so many March moments to choose from for Spartans fans.

In the absence of live sports, TV networks are filling airtime by replaying classic games from the past, some involving our local teams. But if you need a stronger dose of Detroit-area sports to tide you over until the games begin again, we’ve come up with a list you can find online.

The NFL just made things easier for fans by making a decade’s worth of games available for free on Gamepass via NFL.com. Recent Major League Baseball games are relatively easy to find on YouTube. But same goes for other sports, and we’ve compiled a list of 10 memorable games from each of our four major pro franchise, as well as Michigan and Michigan State football and basketball.

Today, it’s Michigan State basketball, with a pair of national championships and so many March moments to choose from for the Spartans' fans: 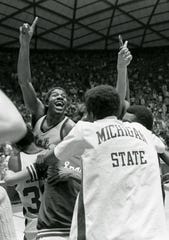 ► Jan. 22, 1995 — Michigan State 73, Michigan 71: The Spartans hadn’t beaten their rivals in three years, since splitting a pair of games with Michigan during the Fab Five’s freshman season. But Shawn Respert scored 30 of his game-high 33 points in the second half — on a sprained ankle — to end the drought at Crisler Arena.

► March 4, 2000 — Michigan State 114, Michigan 63: The final home game for the Flintstones was so much fun it was almost a farce. Mateen Cleaves dished out a Big Ten-record 20 assists and Charlie Bell scored a career-high 31 as the Spartans throttled their rivals on Senior Day, handing Brian Ellerbe and NIT-bound Michigan — still mired in the Ed Martin scandal — its worst loss in program history.

► March 25, 2000 — Michigan State 75, Iowa State 64: Michigan State had the homecourt advantage, playing the Midwest Regional at the Palace of Auburn Hills. And they needed it as they rallied to beat No. 2 seed Iowa State in the Elite Eight, a win highlighted by that alley-oop from Mateen Cleaves to Morris Peterson. 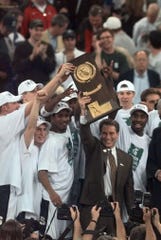 ► March 25, 2005 — Michigan State 78, Duke 68: The Elite Eight overtime win over Kentucky was better theater, including that endless replay review of Patrick Sparks’ 3-pointer. But this Sweet 16 win over Duke was Izzo’s first vs. Coach K, and the suffocating D was a big reason why.

► March 27, 2009 — Michigan State 67, Kansas 62: The road to the Final Four in Detroit included a rematch with Kansas in the Sweet 16. And after the Spartans rallied from a big first-half deficit, they relied on Kalin Lucas to make the winning plays down the stretch.

► March 21, 2010 — Michigan State 85, Maryland 83: There’s no return trip to the Final Four in 2010 if not for the Korie Lucious' buzzer-beater that stunned Maryland in the second round. But this game was an emotional roller coaster for the Spartans, who lost Kalin Lucas earlier in the game to a torn Achilles and nearly blew a 16-point lead. 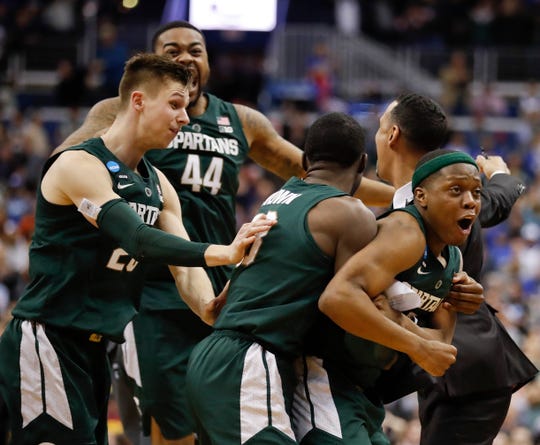 ► Nov. 11, 2011 — North Carolina 67, Michigan State 55: It was a loss the Spartans will remember forever, because of the setting not the score. The first Carrier Classic was played on Veteran’s Day on the deck of an aircraft carrier, the USS Carl Vinson, with President Barack Obama sitting courtside and surrounded by hundreds of Navy sailors in uniform.

► March 31, 2019 — Michigan State 68, Duke 67: Take your pick of highlights, from Matt McQuaid’s spinning layup to Kenny Goins’ winning shot. But this is a game Michigan State fans can watch again and again, as Tom Izzo finally beat Duke again and the Spartans advanced to another Final Four.