Fay, a three-star prospect rated as the No. 36 pro-style quarterback in the nation according to the composite rankings at 247sports.com

On the day the NFL wrapped up its annual draft, Michigan State coach Mel Tucker landed a commitment from a quarterback.

Hampton Fay, a 6-foot-5, 220-pound pro-style quarterback from Fort Worth, Texas, announced on Twitter that he committed to Michigan State. Hampton was recruited by Tucker at Colorado and managed to take a visit to Michigan State before the coronavirus pandemic shut down recruiting. 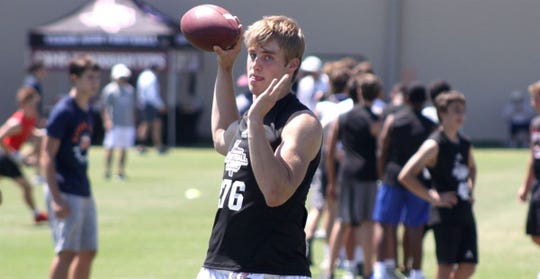 Fay, a three-star prospect rated as the No. 36 pro-style quarterback in the nation according to the composite rankings at 247Sports.com, chose Michigan State over the likes of Indiana, Boise State, Rutgers, Boston College, Colorado, Pittsburgh, Houston and Illinois.

He played in just three games as a junior at All Saints Episcopal after suffering a shoulder injury, but Tucker and offensive coordinator Jay Johnson, who began recruiting Fay while at Colorado, continued their efforts after coming to Michigan State.

The injury might have hurt Fay in the rankings, but it didn’t deter Tucker.

“I really don’t care about the rankings, seriously I don’t, I just want to win games,” Fay told Rivals.com. “I’m grateful to Coach Johnson and Tucker for the confidence in me with only three games last year. I’ve thrown against several guys that are way up in the rankings and know my stock would have been different with a full season. But I’m thankful for the opportunity with MSU and definitely see myself there. So I guess it’s really a blessing in disguise.”