A federal judge's decision on whether the case will move forward is expected some time this week or next.

A resolution on whether a former Michigan State football staffer's lawsuit against ex-coach Mark Dantonio and others will move forward or be tossed out is expected this week or next.

The attorneys for the former staffer, Curtis Blackwell, recently filed their appeal and opposition to a March recommendation by a federal magistrate that the case be dismissed.

The attorneys, in a 27-page filing in federal court in Grand Rapids, argued that, "MSU has created their own problems, yet, Magistrate (Sally J.) Berens, for reasons unknown, directs her wrath at Plaintiff and his counsel." Additionally, the attorneys said, "Plaintiff has the right to have his case decided on the merits." 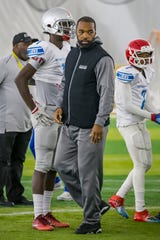 Blackwell, who worked as a recruiting coordinator for Michigan State from 2014 until his dismissal in May 2017, is arguing in case against Dantonio, former president Lou Anna K. Simon and former athletic director Mark Hollis that he was terminated unlawfully. He also has a case against two MSU Police officers, claiming he was arrested unlawfully. Blackwell was accused by MSU Police of obstructing an investigation into a January 2017 party at which three football players allegedly sexually assaulted a woman, and was made the scapegoat by the university amid its external investigation into the program's handling of the situation.

"Plaintiff is pursuing his lawsuit for one reason and one reason only: for the inhumane and unlawful treatment that he was subjected to by the Defendants," Blackwell's attorneys, Thomas Warnicke and Andrew Paterson, wrote in their most recent filing.

The magistrate on March 20 recommended the case be dismissed, for a variety of reasons: Among them, the belief that Blackwell's attorneys are using the lawsuits as a vehicle to create negative publicity for Michigan State through the media, as well as unethical conduct and filings by Paterson.

Berens also opined that Blackwell's federal case, and the discovery process that's gone on for months with depositions of Blackwell, Dantonio, Hollis, Simon and several others, is over the top and being used as a vehicle to pump up Blackwell's state-court lawsuit, in which he alleges racial discrimination.

To those opinions, Blackwell's lawyers argue Berens "is not a mind reader."

The state-court case was filed in early March, after their earlier attempts to get those claims tacked on to the federal-suit claims were denied.

Berens recommended the federal suit be tossed and Blackwell's lawyers be removed from representing him.

She wrote that Blackwell's lawyers "repeatedly misused court process" to "harass" Dantonio, including the introduction of evidence she found irrelevant, including claims that Dantonio violated NCAA rules.

"I think the opinion speaks for itself," Thomas Kienbaum, an attorney for Dantonio and the defense, said at the time of the recommendation, a rare public comment by Dantonio's defense team.

Dantonio's team argued in a filing in early April that if the case is dismissed, they should be awarded at least $214,153 in legal fees. They say the case has generated more than $300,000 in fees.

Paterson already has been sanctioned in this case, $10,000, for publicly filing the transcript of MSU Police Det. Chad Davis' deposition, despite both sides agreeing to keep that transcript sealed. Only Blackwell's deposition has been mostly released, with parts of Dantonio's in the public sphere, as well. Hollis' deposition, which is said to address at length Dantonio's recruitment of troubled recruit Auston Robertson over the objections of his own staff and university officials, remains sealed.

Robertson played one season at MSU, blew the whistle on the January 2017 party, and then was accused of rape himself in April 2017. He is serving up to 10 years in federal prison in the Upper Peninsula.

"Magistrate Berens should be halted in her tracks for her attempts to chill Plaintiff’s ability to pursue his claims," Blackwell's lawyers wrote, adding that the magistrate shouldn't have taken her opinions out on Blackwell, who "did not draft, review, approve or even read the filings which are at issue."

"The only 'haranguing' being done is on the part of Defendants, who endeavor to use their sheer power, money and resources to attempt to bludgeon Plaintiff into submission."

Legal experts expect a federal judge to issue a final ruling shortly, either this week or next.