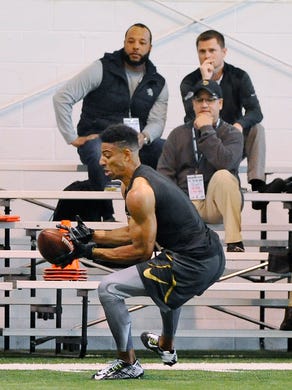 Quarterback Connor Cook works with the offense on their next play during drills. Daniel Mears, Detroit News
Fullscreen

East Lansing — Connor Cook’s throwing session was the main event at Michigan State’s pro day Wednesday, but one of his wide receivers tried to steal the show.

Aaron Burbridge, who had an excellent senior season, made a few impressive catches during passing drills with Cook at the Duffy Daugherty Building.

Three scouts said Burbridge had a good performance at the pro day, which featured representatives from all 32 teams.

“A lot of people came up to me and told me good job,” Burbridge said. “I guess I did good. I felt I did good, too, though.”

Typically, players who have attended the combine and Senior Bowl, as Burbridge did, can’t really help their draft stock on pro day, but his ability to pluck the ball with his hands from multiple body positions stood out Wednesday.

“All you want to see is if he’s a natural hand catcher,” NFL Network draft analyst Mike Mayock said of evaluating wide receivers on pro day. “You can tell when a guy’s got natural hands. You hardly hear it. It’s just simple.

“Some guys fight it, and some guys are just natural. And (Burbridge) catches it very naturally.”

Burbridge said his natural catching ability is a big part of his game, and he works to hone that skill by having people throw him football at odd angles or making him catch objects off the field.

Burbridge had 85 catches for 1,258 yards after taking over as the No. 1 receiver for the Spartans in 2015. He’ll likely be selected on Day 2 or 3 of the draft next month.

“He’s effectively a 4.55 guy, which is fine,” Mayock said. “He’s one of those guys that’s going to have to learn how to separate with quickness, with route running ability. He’s not going to separate with overall speed.”