Spartans ready to do ‘whatever it takes’ to win a championship

Spartans ready to do ‘whatever it takes’ to win a championship

Spartan Gavin Schilling drives the ball through the hoop with two hands as the crowd applauds on Public Practice day Thursday, March 17, 2016 at the Scottrade Center in St Louis before the first round of the NCAA men's basketball tournament. Michigan State will play Middle Tennessee Friday afternoon in their first-round game. Dale G. Young, The Detroit News
Fullscreen

Denzel Valentine (left) Matt Costello and Bryn Forbes laugh when asked "who they think the best tree point shooter in the country is" during the news conference. Dale G. Young, The Detroit News
Fullscreen

Denzel Valentine signs an autograph for a young fan in the stands. Dale G. Young, The Detroit News
Fullscreen

Eron Harris flies toward the rim for a basket in the Scottrade Center. Dale G. Young, The Detroit News
Fullscreen 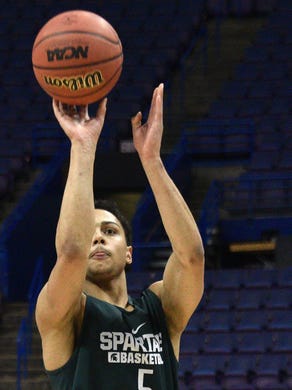 Bryn Forbes shoots a "Three" from beyond the arc. Dale G. Young, The Detroit News
Fullscreen

Deyonta Davis homes in on the basket as he dunks the ball. Dale G. Young, The Detroit News
Fullscreen

Spaertans wave to fans at the end of practice. Dale G. Young, The Detroit News
Fullscreen

Lourawls Nairn and the rest of the Spartans sign autographs at the end of their practice session. Dale G. Young, The Detroit News
Fullscreen

“I came up short two years in row and I’m tired of coming up short,” senior Denzel Valentine said. “I want to go ahead and win this thing.”(Photo: Dale G. Young / Detroit News)

St. Louis — Last weekend in a cramped locker room at Bankers Life Fieldhouse in Indianapolis, Tom Izzo was struggling with how to approach his team.

Michigan State had just beaten Maryland, 64-61, to earn a spot in the Big Ten tournament championship game, but Izzo wasn’t exactly thrilled with everything he saw on the court.

That’s when he asked them, did they want him to lay off, congratulate them, or none of the above?

The response came quickly, and there’s no surprise who it came from.

As second-seeded Michigan State prepares to play No. 15 Middle Tennessee Friday in the Midwest Regional, it brings along that attitude.

It’s the attitude adopted by Denzel Valentine and senior Matt Costello the moment Michigan State lost to Duke in last season’s Final Four. Since that day, there has been one goal: win a national championship.

“I came up short two years in row and I’m tired of coming up short,” Valentine said. “I want to go ahead and win this thing.”

It’s a no-nonsense approach born out of a regional final loss to eventual champion Connecticut two years ago followed by last year’s exit.

And if the Spartans win what would be Izzo’s second title, the statement from Valentine will take its place among the iconic moments of Izzo’s 19-year run in the NCAA Tournament.

There’s Mateen Cleaves calling out his teammate and childhood friend Morris Peterson in a locker room at The Palace during the 2000 title run.

There’s Izzo smashing a game tape with a hammer before the 2005 Tournament that ended with a march to the Final Four.

There’s last year when Izzo told his team just before it took the court against Louisville in the regional final that if they put in two hours of work they’d have a lifetime of memories.

“I think that was a hell of a statement by a 22-year-old kid,” Izzo said. “I’ve got a ton of respect for that statement. So maybe someday a few years from now that’ll be in the locker room. ... That will be one of those cliché lines that I didn’t use, he used, and I thought it was outstanding.”

It’s not hard to understand why Valentine, a candidate for player of the year, and Costello have gotten to the point where it’s national championship or bust. There’s really nothing else for them to accomplish.

They’ve won the Big Ten twice, reached the Sweet 16 as freshmen, the Elite Eight as sophomores and the Final Four as juniors.

That leaves one logical next step.

And that means the Spartans don’t have a problem with Izzo getting on them. While teams might have had players who have wilted under the pressure, this one has thrived.

After Michigan State ended the regular season with a win at home over Ohio State, the afterglow hardly lasted. By Monday, Izzo put the Spartans through one of their toughest practices.

It hasn’t been just this week, either. Izzo has been talking to Valentine and Costello for several weeks about preparing for this run.

And when Valentine told his coach to keep pushing, Izzo realized he was doing it right.

“I’d like to live my life a little bit, too. But when you’re trying to get to the top of that pyramid, when only one team is left standing, you’ve got to do what you’ve got to do.”