Denzel Valentine of Michigan State is the Associated Press Player of the Year, edging out Oklahoma’s Buddy Hield by three votes. 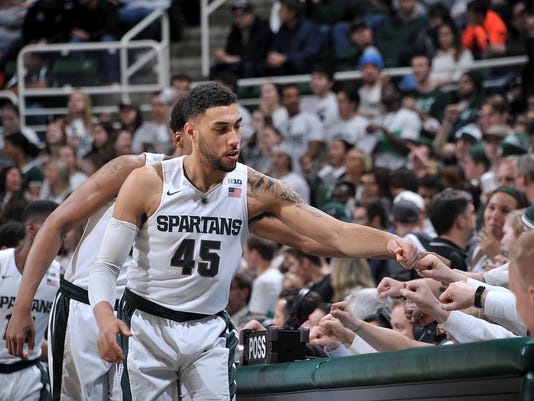 Houston — The honors keep rolling in for Denzel Valentine, and the latest was a milestone for Michigan State.

The Spartans guard, who completed his final season, was named national player of the year by the Associated Press on Thursday, the first time a Michigan State player has received the honor.

“As someone with an appreciation for the history of college basketball, it’s a real honor to be named national player of the year by the Associated Press,” Valentine said. “Look at the names of all the great players to win this award dating back to the 1960s — they are some of the game’s all-time greats. To be the first Spartan to ever win this award is extremely humbling.”

Valentine won the award by the slimmest of margins, edging Oklahoma’s Buddy Hield by three votes. Valentine received 34 of 65 votes from the national media panel that votes in the weekly Top 25. Hield was the only other player to receive votes.

Hield and Valentine were the only unanimous selections to the AP All-America team.

It is the sixth national player of the year award for Valentine, who also has been recognized by the National Association of Basketball Coaches, Basketball Times, Sports Illustrated, USA Today Sports and NBC Sports.

All eyes on MSU target Jackson at Chicago game

Valentine is a finalist for the Oscar Robertson Trophy, and Naismith and Wooden awards. The Robertson Trophy will be handed out Friday in Houston while the Naismith Award is announced Sunday. The Wooden Award is awarded April 8 in Los Angeles.

Valentine averaged 19.2 points, 7.5 rebounds and 7.8 assists in becoming the only player in NCAA history to average 19 points, seven rebounds and seven assists since the assist became an official statistic in 1983-84. He is the first player to lead the Big Ten in overall scoring and assists since Iowa’s Andre Woolridge in 1997. He also ranks fourth in the nation in assists (7.8), eighth in 3-pointers (3.35) and 11th in 3-point percentage (.444).

The season ended short of Valentine’s goal of a national championship, however, as Michigan State was upset by Middle Tennessee in the first round of the NCAA Tournament.

It has made being in Houston on Final Four weekend difficult.

“There’s no fighting it, I just got to learn to live with it.”

In addition to his player of the year awards, Valentine has been named first-team All-America by the Associated Press, NABC, USBWA, Sporting News, USA Today and Sports Illustrated. He became the eighth Spartans player to earn Big Ten player of the year honors, and was a unanimous first-team all-Big Ten selection. He earned most outstanding player honors at the Big Ten tournament and was named the USBWA all-district V player of the year.