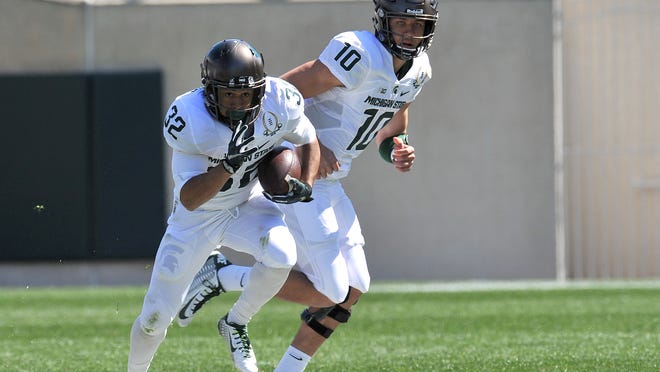 East Lansing – The winningest class in Michigan State history was on the field at Spartan Stadium on Saturday, the only issue is they weren’t playing in the game.

As Michigan State was playing the annual Green-White Game, last season’s senior class was being honored. It’s left plenty of holes to fill on the field, but that’s just one factor. Michigan State is also out some pretty significant leaders.

But waiting in the wings are a group of veterans eager to jump up. Quarterback Tyler O’Connor’s main goal was to be “the man on the team,” while linebacker Riley Bullough thinks leadership is as important as anything.

“It showed today, so it’s exciting going into the summer workouts and then into fall.”

The Spartans won’t name captains until the end of preseason camp, but O’Connor and Bullough, both fifth-year seniors, are pretty good bets.

Even with a large group of seniors moving on, there are plenty of more candidates to lead. And it’s not just seniors. Linebacker Jon Reschke and safety Montae Nicholson, both juniors, will be key parts of the defense while the offensive backfield is full of younger players with experience, including sophomores LJ Scott and Madre London.

But it’s the seniors that hold the key for the Spartans.

“It's not just good enough anymore to be a good player, you got to lead as you get to be an upperclassman and that's what we ask our guys to do,” coach Mark Dantonio said. “They're doing a nice job with that. Some guys, quite honestly, have never been in that position. They're sophomores going into junior or they're juniors going into seniors and they've just not been in that position, so maybe it's a little bit of new ground for them, but they're learning how to do it.

“There's always a change in leadership every single year, but we've seen that before. When Kirk Cousins left there was a void, but people pick it up and they move forward and you can go through a lot of our guys.”

As important as the seniors are at Michigan State, there were several true freshman making plays on Saturday.

Wide receiver Donnie Corley had one catch for 18 yards while fellow receiver Cam Chambers two catches for 45 yards, including a 13-yard touchdown.

Corley has been the star of spring practice and should get plenty of playing time this fall. He certainly has impressed his teammates over the last few weeks.

“He came in started making plays from day one,” senior tight end Jamal Lyles said. “He's a fast kid, smart, and he picked up the offense, and he's only going to get better and better as the process go on and get more reps run against the corners that we have and the safeties that we have and he's just going to keep continuing to grow as a person.

“He's just got that attitude that he wants to make a play and that's what makes a great football player so he's doing really good.”

Several Spartans did not play on Saturday, including defensive tackle Damon Knox, who is in his sixth year.

… A record 1,817 children participated in the annual youth football clinic held before the game. The previous mark was 1,718 in 2015.