MSU's Jon Reschke out for 'significant amount of time'

Michigan State will be without the services of starting outside linebacker Jon Reschke for a "significant" amount of time with an ankle injury.

MSU's Jon Reschke out for 'significant amount of time'

East Lansing – It’s a classic line, probably categorized as a cliché by most.

Next man up. It’s been used by team after team through the years any time a player is injured and his replacement is expected to step in with no drop-off.

Entering this season, it was assumed Michigan State had depth at linebacker in case of such a scenario.

Michigan State will get the chance to prove that as it heads to Indiana on Saturday without junior outside linebacker Jon Reschke, who hurt his ankle against Wisconsin last weekend and could miss a significant amount of time.

The Spartans also might have to play without senior middle linebacker Riley Bullough, who did not play against the Badgers because of what is believed to be a shoulder injury.

“Jon Reschke is out right now, and probably out for a significant time period here as he works through a severe ankle sprain,” coach Mark Dantonio said Tuesday. “Riley probably is a little bit more day-to-day, and we’ll see how that goes as we move through the week. We’ll make an announcement prior to the game as to whether or not he can or cannot go.”

It’s a significant amount of experience and production lost. Bullough was the leading tackler a season ago and is the quarterback of the defense.

Reschke, meanwhile, had a breakout season in 2015 and was off to another quick start after missing the opener with a hand injury. At Notre Dame, it was Reschke who sparked the defense with an interception and a forced fumble that had Dantonio calling him the clear player of the game.

Now the 17th-ranked Spartans turn to sophomore Andrew Dowell on the outside and junior Shane Jones in the middle.

“It’s definitely an opportunity for guys that were in the 2 spot to step up and make a name for themselves in our defense,” said outside linebacker Chris Frey, the only linebacker to start all three games. “Guys are gonna be ready to go. We have that next man up mentality and we expect there to be no drop-off mentally or physically or athletically from the ones to the twos.”

Dowell started in Reschke’s place against Furman and had eight tackles and an interception that helped seal the victory in the fourth quarter. He understands the significance of losing two of the team’s top players, but he’s up to the challenge of stepping back into the starting lineup.

“I’ll have to pay attention to detail more and have better practices being with the ones,” Dowell said. “That’s something I look forward to this week and getting ready for the game.”

Jones got his second career start against the Badgers as Bullough’s injury kept him from suiting up after aggravating his shoulder against the Fighting Irish. Jones had six tackles, including two for loss, but his biggest role was running the defense.

It’s a tough job, and Jones fared well, especially considering he has the ability to play all three linebacker positions.

“I think I did well having everybody on the same page,” Jones said. “There were a couple of missed assignments, but for the most part I did get everybody lined up and everybody was ready to play, so I’m pretty excited about that.

“Wherever I’m needed, I can go in and play any linebacker position, so it’s all about making sure the coaches can trust you at the end of the day, and I feel like they can trust me.”

Trust is the big factor for Ed Davis, as well. The sixth-year senior slowly is working his way back from tearing the ACL in his right knee and missing all of last season.

He played one play against Notre Dame and a handful against Wisconsin.

Davis could be the wild card in the rotation, and if he returns to form, he could be a spark for the lagging pass rush. But getting the confidence back has been a slow process.

“It’s sort of day-by-day, game-by-game,” Dantonio said. “I want him to feel confident. Part of this is him having confidence.” 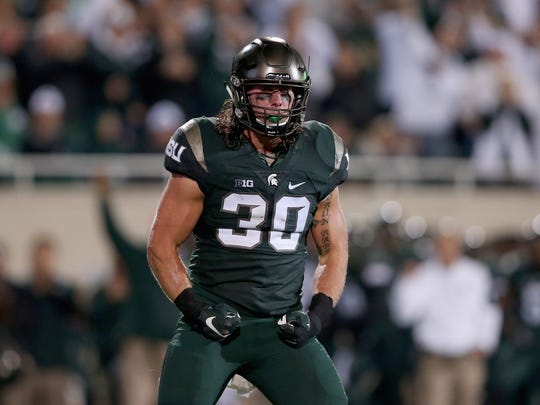