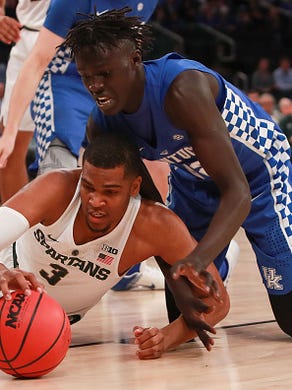 Wenyen Gabriel of the Kentucky Wildcats fights for a loose ball with Alvin Ellis III of the Michigan State Spartans in the first half. Michael Reaves, Getty Images
Fullscreen

Isaiah Briscoe of the Kentucky Wildcats puts up a shot over Alvin Ellis III and Kenny Goins of the Michigan State Spartans in the first half. Michael Reaves, Getty Images
Fullscreen

Kentucky guard De'Aaron Fox (0) is fouled by Michigan State guard Cassius Winston (5) while driving to the basket during the second half. Julie Jacobson, Associated Press
Fullscreen

Matt McQuaid of the Michigan State Spartans throws a pass defended by Derek Willis (35) and Malik Monk (5) of the Kentucky Wildcats in the second half. Michael Reaves, Getty Images
Fullscreen

Miles Bridges of the Michigan State Spartans in action against the Kentucky Wildcats in the second half. Michael Reaves, Getty Images
Fullscreen 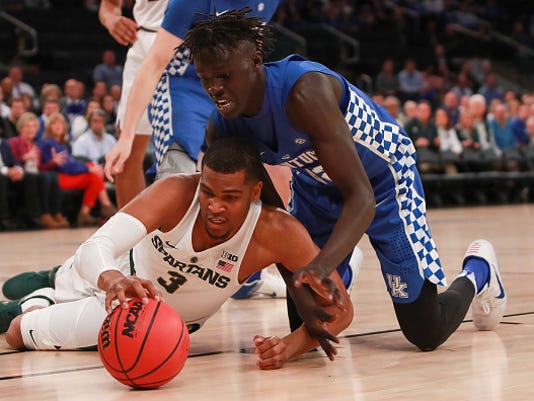 Wenyen Gabriel of the Kentucky Wildcats fights for a loose ball with Alvin Ellis III of the Michigan State Spartans in the first half.(Photo: Michael Reaves, Getty Images)

New York — All of the attention was on the freshmen Tuesday night as Kentucky and Michigan State squared off at Madison Square Garden in the Champions Classic.

But the difference in the game was the players that have been around for more than a year. That’s not a big group for Kentucky, but the 21 points from sophomore Isaiah Briscoe proved to be as big as the 23 from freshman Malik Monk in a 69-48 blowout over Michigan State.

The Spartans have more players with experience, but outside of a solid effort from Kenny Goins, they didn’t get much from the players who have been around for more than a year.

Goins was 4-for-6 from the field and had nine points with eight rebounds. But senior guard Eron Harris was ineffective on both ends of the court and scored just two points while junior guard Lourawls "Tum Tum" Nairn and senior guard Alvin Ellis had little impact on the game. Sophomore guard Matt McQuaid shot just 1-for-6.

The struggles of the experienced Spartans led to a change in the lineup to open the second half as Cassius Winston and Joshua Langford were in for Nairn and Harris.

“There’s no quarterback controversy here,” Michigan State coach Tom Izzo said. “I’m trying to find someone who is gonna guard somebody. It’s that simple for Harris. If you don’t want to guard you won’t play. That’s the way it’s gonna be. Langford hasn’t played much the last three weeks some we wanted to give him some time.

“I can’t say anybody checked really well but Tum said it best, the freshmen will have ups and downs but the upperclassmen didn’t do a very good job. That’s on the coaches.”

Much of the pressure this season is falling on Harris, who showed last season when Denzel Valentine was out four games with a knee injury that he could be a big scorer. Through two games, however, he’s struggled.

After going 3-for-8 in the opener against Arizona, Harris was just 1-for-3 on Tuesday and played just 13 minutes.

“I’m disappointed in Eron if you want to know the truth,” Izzo said. “He was one of our best defensive players last year and sometimes when you switch roles you forget where you came from. So we got to get him back on track a little bit. He is a good shooter and we’ve got to get him more shots.

“Our execution was poor and we need a little more from Nick (Ward) because he is a good offensive player but he’s not very good getting through plays and that hurt Eron on ball screens. But Eron has got to do a better job.”