MSU-OSU is personal for LJ Scott, and he shows it

The native of Hubbard, Ohio, opened the game with a 64-yard touchdown catch and finished with a career-high 160 yards rushing and another score.

MSU-OSU is personal for LJ Scott, and he shows it

Running back LJ Scott talks about his play during Michigan State's loss to Ohio State.

East Lansing – There’s never any question which game on the schedule is biggest for Michigan State’s football program.

That, of course, is the rivalry with Michigan.

But for a large group of players and coaches, the showdown each season with Ohio State is just as big. The fact it’s had so much on the line in recent season helps, but with 28 players on Michigan State’s roster hailing from the state of Ohio, it’s a pretty darned important game.

One player who showed that during Saturday’s 17-16 defeat at the hands of No. 2 Ohio State was sophomore running back LJ Scott. The native of Hubbard, Ohio, opened the game with a 64-yard touchdown catch and finished with a career-high 160 yards rushing and another score.

Needless to say, playing against the school he almost attended was a big deal.

“This game means a lot personally,” Scott said. “The fact that I am from Ohio and during my recruiting process it came down to Michigan State and Ohio State. This game means to me just as much as it does a kid from Michigan when we are playing Michigan. It is about the same on a personal level.

“I knew I had to have a big game today. I had to hear from fans, ‘I bet you wish you came to Ohio State.’ That is not the case.”

Scott has been steadily coming on as the season has progressed. After leading the Spartans in rushing last season as a freshman, Scott entered the season as the clear starter. However, he was watching junior Gerald Holmes slowly take over.

“He was patient,” co-offensive coordinator Dave Warner said. “Sometimes he's just not been patient with his reads so I thought he did a great job there. I thought he was very strong running through contact. Obviously had some big plays for us.”

Michigan State offensive coordinator Dave Warner talks about going for two and the performance of LJ Scott against Ohio State.

The screen pass on the second play from scrimmage was Scott’s first big play, but he added a 61-yard run in the second half.

And with Michigan State trailing by seven and a little more than nine minutes to play, it took possession at its 44-yard line. That’s when Scott took over.

He opened the drive with a 26-yard run and carried the ball all eight plays of the drive, his last run a touchdown. It was reminiscent of Scott’s play on the winning 22-play drive in last season’s Big Ten championship game, when he carried 14 times.

“It did (remind me of it). It did a lot,” Scott said. “Once I was on the sideline and saw the clock winding down, I had the idea that I was going to have to come through for the team on the drive. I had a feeling and my gut feeling was telling me the right thing.”

Michigan State failed on its two-point conversion try after Scott’s touchdown, but it was the fourth time in the last five games the Spartans have run for more than 200 yards, gaining 207 on Saturday.

“We have been practicing hard enough to get to the point where we played them the way we played them today,” Scott said. “Overall as a team, we are just trying to stick together and come together better, knowing that the seniors have their last two games. I told them I was doing everything for them. The outcome isn't what we thought, but we came to play today, that is for sure.”

In a fake punt play that caught the Buckeyes by surprise, linebacker Chris Frey (23) takes the ball and runs 25 yards in the fourth quarter for a first down that helped set up the last score. Dale G. Young, Detroit News
Fullscreen

At the end of his last home game as a Spartan, Josiah Price takes a moment with his head against the goalpost while the Buckeyes players celebrate. Dale G. Young, Detroit News
Fullscreen 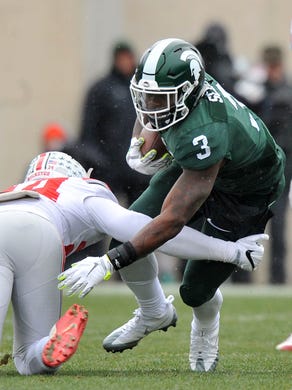 The snow falls as Mark Dantonio's Spartans fall a touchdown behind the Buckeyes in the third quarter. Dale G. Young, Detroit News
Fullscreen

Spartan running back LJ Scott (3) sprints away from Buckeye tacklers on his way to a touchdown in the fourth quarter. Dale G. Young, Detroit News
Fullscreen

Spartan running back LJ Scott (3) runs through a tackle by Buckeye Raekwon McMillan (5) and crosses the goal line for a touchdown in the fourth quarter. Dale G. Young, Detroit News
Fullscreen

RJ Shelton sprints past and Spartan quarterback Damion Terry (6) turns to hand the ball to a Michigan State running back in the third quarter. Dale G. Young, Detroit News
Fullscreen

A Buckeye tackler falls on his face while Spartan LJ Scott (3) runs away for a long first down that set up the team's fourth-quarter touchdown. Dale G. Young, Detroit News
Fullscreen 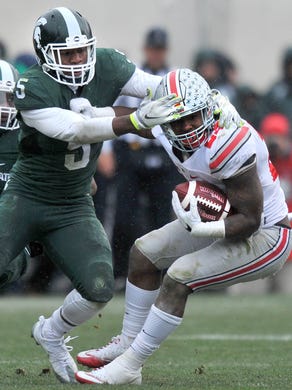 While the thermometer drops and snow swirls in the stadium, miserable fans huddle in the stands late in the fourth quarter. Dale G. Young, Detroit News
Fullscreen 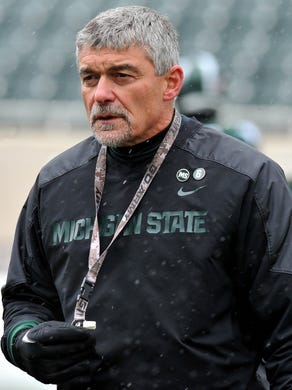