The Michigan State defensive tackle who left after his junior season was taken with the third pick of the second round – the 35th overall.

Michigan defender Jabrill Peppers went No. 25 overall to the Cleveland Browns, who traded up to get him. David Guralnick, Detroit News
Fullscreen

Michigan cornerback Jourdan Lewis went in the third round, No. 92 overall, to the Dallas Cowboys. Robin Buckson, Detroit News
Fullscreen

Michigan safety Delano Hill went in the third round, No. 95 overall, to the Seattle Seahawks. David Guralnick, Detroit News
Fullscreen

Michigan linebacker Ben Gedeon went in the fourth round, No. 120 overall, to the Minnesota Vikings. David Guralnick, Detroit News
Fullscreen 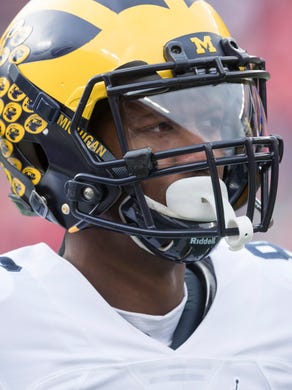 Eastern Michigan defensive end Pat O'Connor went in the seventh round, No. 250 overall, to the Detroit Lions. Associated Press
Fullscreen 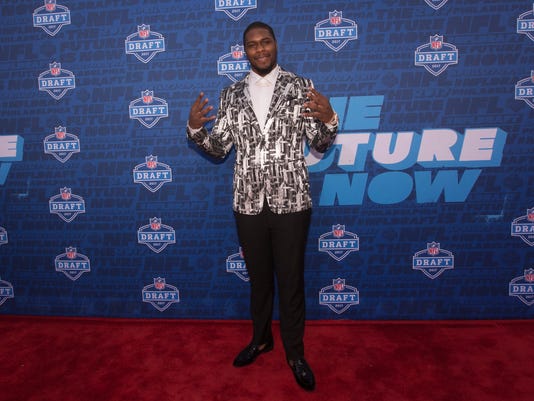 Michigan State's Malik McDowell poses for a picture on the red carpet prior to the start of the 2017 NFL Draft.(Photo: Mitchell Leff, Getty Images)

Malik McDowell didn’t get taken in the first round of the NFL Draft on Thursday night, however, his excitement was hardly dampened a day later.

The defensive tackle who left Michigan State after his junior season was taken with the third pick of the second round – the 35th overall – by the Seattle Seahawks on Friday. And the Detroit native could hardly contain his enthusiasm.

“I didn’t cry but there is a smile on my face,” McDowell said in a conference call. “I’m smiling from ear to ear.

“I’m just coming in there to compete. Whatever works out form there, that’s what it is. … I’m motivated. I’m ready to come down there play for the 12th man.”

McDowell was in the green room for the first round on Thursday but never heard his name called after his stock fell rapidly from the end of the 2016 season.

The 6-foot-6, 276-pounder was one of the more polarizing players in the draft.

“Talent-wise, this guy is a first-round talent,” NFL Network analyst Bucky Brooks said. “When he lined up and was ready to play and commits to being a player, he dominates the game. We saw that in the Notre Dame game, he looked like a top-10 prospect in the draft. However, he doesn’t play at a high level consistently.”

Seen by most as one of the more talented players available, McDowell had seen his stock drop steadily since the end of the season as analysts have dissected his tape and team officials got the chance to interview the former freshman All-American during the NFL Combine in March.

Neither resulted in anything positive for McDowell as one team official, according to Yahoo Sports, said his interview at the Combine was the “worst” he’d ever conducted. Other analysts praised McDowell’s ability while crushing him for his perceived lack of effort.

However, it appears landing with the Seahawks might be an ideal move for McDowell as Seattle has a history of taking chances on talented players with some red flags.

“When you know a little bit about the Seattle Seahawks, they believe in taking chances on these guys,” Brooks said, “because they believe in the talent. They believe they have a culture where they can create a level of accountability amongst their players and make them rise to the standard.

“If he rises to the standard, they are getting a dominant player, potentially.”

McDowell was a freshman All-American in 2014 and earned second-team All-Big Ten honors in 2015. A big season was expected in 2016 but it never materialized, no doubt affected by the Spartans’ dismal 3-9 season and lack of playmakers on the defensive line.

He finished with 34 tackles, including seven for loss in nine games. But McDowell did not play the final three games because of an ankle injury, a stretch that stood out to naysayers.

“He runs hot and cold,” NFL Network analyst Mike Mayock said. “When you watch him against Notre Dame he’s a top-15 pick. You watch him against Michigan he looked like a fourth-round pick. I’ve had an awful lot of coaches say, 'If we could unlock the potential in this kid we’ll have something special.'”