Spartans outrebounded 46-34 as Blue Devils continue their dominance in the series, winning 88-81 Tuesday in Champions Classic. 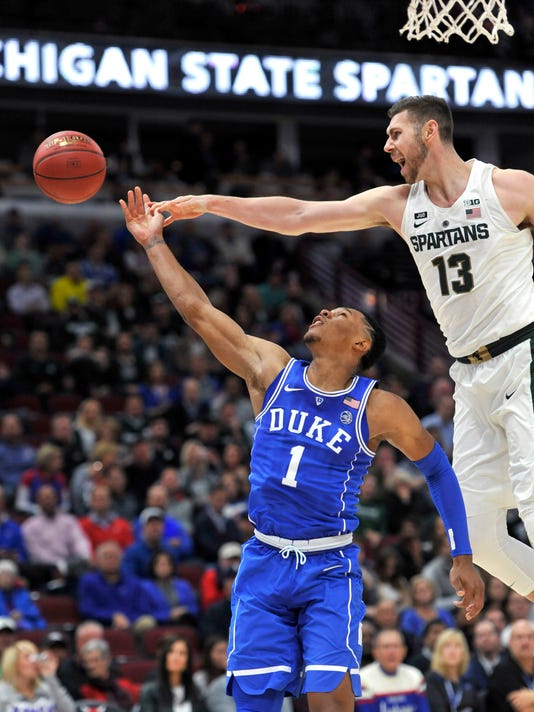 Chicago — The rankings said Duke vs. Michigan State Tuesday night in the Champions Classic was a matchup of the top two teams in the nation.

It didn’t disappoint as the teams threw haymakers at each other all night, living up to the hype that preceded the No. 1 team taking on the No. 2 team.
In the end, it was the top-ranked Blue Devils that threw the final knockout, getting 37 points from senior Grayson Allen on the way to beating No. 2 Michigan State, 88-81, in front of a packed house at the United Center.

Michigan State (1-1) is now 3-4 in the Champions Classic and coach Tom Izzo is 1-11 against Duke coach Mike Krzyzewski, a record that Izzo isn’t happy with, even in a tight game between the top teams in the nation.

“Tonight, Allen made some big shots. That’s what seniors do. That was the difference in the game.”

Miles Bridges, Jaren Jackson Jr. and Nick Ward each scored 19 for the Spartans while Jackson added seven rebounds and three blocks for Michigan State, which had 12 for the game.

But the Spartans were far from efficient, getting outrebounded 46-34, including 25-11 on the offensive glass. They also turned the ball over 17 times.

“We’re disappointed because we gave the game away,” Bridges said. “We lost on effort-related stuff — turnovers, offensive rebounds — stuff that we can control.”

More:MSU rotation remains a work in progress for Izzo

Trevon Duval added 17 points for the Blue Devils (3-0) while Wendell Carter Jr. scored 12. Standout freshman Marvin Bagley took a finger to the eye in the first half and did not return, playing just 10 minutes.

“Big-time win for us,” Duke coach Mike Krzyzewski said. “Tom has such a great program at Michigan State. They’re a veteran team and that’s what worried me about them. We were bringing a young team in here, a talented young team, but I was worried about that.

“Bagley is our most talented player and he has a scratched eye, so we didn’t want to bring him back. A lot of adversity, beat a great team. Not a bad night for us.”

Duke coach Mike Krzyzewski yells to his players during the first half. Paul Beaty, AP
Fullscreen 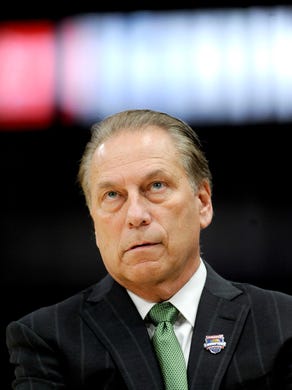 Michigan State coach Tom Izzo looks up at the scoreboard during the first half. Paul Beaty, AP
Fullscreen

Gavin Schilling (34) of the Michigan State Spartans dunks over Marvin Bagley III (35) of the Duke Blue Devils during the Champions Classic at the United Center on November 14, 2017 in Chicago, Illinois. Jonathan Daniel, Getty Images
Fullscreen

The first half was everything that could be expected in a prize fight as each team took turns landing big blows. A 13-0 run from Duke eventually led to a 10-point lead before Michigan State answered with an 11-0 run to take a 25-24 lead.

Michigan State got rolling in transition from there as it pushed its lead to 34-30 on a Joshua Langford 3-pointer from the corner. However, the Blue Devils closed the half with an 8-0 run take a 38-34 lead into the locker room.

Duke looked like it was pulling away early in the second half. After Jackson hit his third 3-pointer to tie the game at 42, the Blue Devils went on a 12-2 run to take a 54-44 lead, matching their biggest of the game. But the Spartans clawed back with their own 12-2 run, tying the game at 56 on a three-point play from Ward after a mad scramble for the ball under Michigan State’s basket.

Allen responded with a three in the face of Matt McQuaid but the Spartans tied it up with a McQuaid drive then a free throw from Ward. Michigan State took its first lead of the half, 61-59, on a pair of free throws from Joshua Langford as it went back and forth with Duval scoring on a couple of drives to put Duke up 65-62 before Jackson dunked a Bridges' miss with 8:14 to play.

“Every time we got tied or up one, they hit a big shot or we had a turnover or a foul,” guard Cassius Winston said. “Any type thing like that. We’ve got to figure out a way to get through those and we got to step on their neck. We’re making a run, we got to keep building it.”

Duke kept the momentum rolling and pushed the lead to 71-66 before a pair of 3-pointers from Bridges and a free throw from Winston put the Spartans ahead, 73-71. But Duval answered with a drive to the hoop that was countered by a Kenny Goins dunk on a dish from Winston.

More:Wojo: MSU's Izzo fumes as Duke does it again

Duke then got a break when Wendell Carter grabbed an airball and dunked it before Gary Trent Jr. hit a triple from the wing to give the Blue Devils a 78-75 lead with 3:12 to play. Duke then put the game away as Allen nailed two more 3-pointers down the stretch.

“I felt like I was hot from three,” Allen said. “It started with Tre getting me open looks. When I get a few open looks the basket gets bigger.”

Michigan State now heads home where it will host Stony Brook on Sunday before heading to Portland next week for the PK80 Classic and another chance on the big stage as a game with DePaul is up first and a potential showdown with North Carolina.

But in the back of the Spartans’ minds will be Duke and potentially getting another shot.