Hand it to him: Bridges' clutch 3 sinks Purdue in MSU win

Spartans sophomore wanted the ball and knew exactly what to do with 2.7 seconds left as his team downed the No. 3 Boilermakers.

Hand it to him: Bridges' clutch 3 sinks Purdue in MSU win

Nick Ward drives the ball through the basket for a big dunk in the first half. Dale G Young, Detroit News
Fullscreen

Matt McQuaid makes a dunk that delighted the crowd and his teammates, but referees called a touch foul before the shot that took the basket away. Dale G Young, Detroit News
Fullscreen

Gavin Schilling lays the ball into the basket in the second half. Dale G Young, Detroit News
Fullscreen

Joshua Langford sinks a 3-pointer in front of the Spartan bench in the second half. Dale G Young, Detroit News
Fullscreen

Jaren Jackson Jr works for a basket against Vince Edwards in the second half. Dale G Young, Detroit News
Fullscreen

Kenny Goins makes a put-back and there's nothing Isaac Haas can do but watch. Dale G Young, Detroit News
Fullscreen

Tom Izzo gets an explanation on a call in the second half. Dale G Young, Detroit News
Fullscreen

Miles Bridges puts in a shot off the glass in the second half. Dale G Young, Detroit News
Fullscreen

Jaren Jackson Jr puts in a shot over the Boilermaker defense in the second half. Dale G Young, Detroit News
Fullscreen 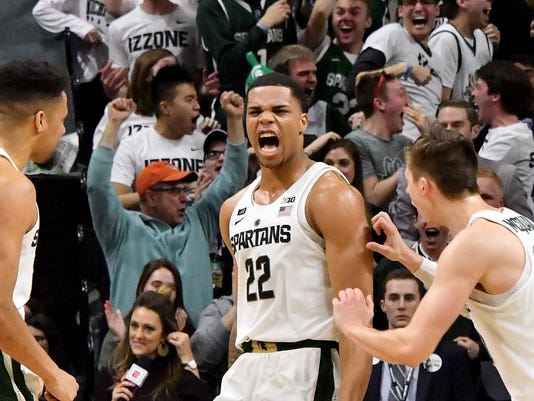 East Lansing — Miles Bridges was still waiting for the moment.

That moment when the superstar player reminds everyone that he’s just that, the best player on the court, and with the game on the line, put the ball in his hands.

That moment came on Saturday afternoon as the crowd was ready to burst at the seams inside the Breslin Center, watching a top-five classic between Michigan State and Purdue.

Game tied. Clock ticking down to zero. Michigan State. Get the ball to Bridges.

The sophomore answered, hitting a deep 3-pointer from the wing over Purdue’s Dakota Mathias with 2.7 seconds left on the clock to give No. 4 Michigan State a 68-65 victory over No. 3 Purdue.

Cassius Winston and Miles Bridges after No. 4 Spartans defeated No. 3 Boilermakers.

It was a shot that sparked bedlam in the arena and gave Michigan State its eighth straight win, keeping the Spartans alive in the race for the Big Ten championship with just four games remaining in the regular a season.

It also handed Purdue its second straight loss after it had won 19 consecutive games entering the week. The loss on Wednesday at Ohio State coupled with Saturday’s defeat has the Boilermakers needing lots of help in the race for the conference title.

On Saturday, Bridges put them in that position.

Boilermakers coach on Spartans sophomore's "tough" 3-pointer with 2.7 seconds left, which was the winning basket in a 68-65 MSU victory.

It was the final basket of the game for Bridges, who scored 20 to lead the Spartans (24-3, 12-2 Big Ten). Cassius Winston helped out with 10 points and 10 assists on a day Nick Ward was limited with defensive challenges and Jaren Jackson Jr. was again in foul trouble.

But the Bridges carried Michigan State in the second half, and when the game finally ended, he embraced coach Tom Izzo and said something in his ear.

“That one was for you,” Bridges said of his message to his coach.

It was an emotional day for Izzo. The Spartans honored his former boss and mentor Jud Heathcote in a halftime ceremony and Izzo wore a green blazer that Heathcote so often did leading the Spartans. It was also reunion weekend and the stands were filled with former players.

“To say it is an emotional day would be an understatement of the world,” Izzo said after the game.

Izzo didn’t want the day to be about him. In fact, he said he hoped his players were playing for themselves with so much on the line in the Big Ten race.

But things have been different the past few weeks. Izzo has faced pressure following media reports questioning how his program has handled sexual assault cases over the years, and he watched as close friend Mark Hollis stepped down as athletic director.

“All season he has taken so much heat for stuff,” Bridges said. “For us to win a game like that for him and the coach that provided for him is great.”

It was fitting, really, that it was Purdue and Michigan State. And the teams played like an old-school Big Ten game. Former Purdue coach Gene Keady was there to honor Heathcote, and it wouldn’t have seemed out of place if the old foes were back on the sidelines.

It was physical and played cleanly, both teams committing just nine total turnovers and playing almost even on the glass.

The Spartans made it clear they were not going to let Purdue’s shooters beat them, and 7-foot-2 center Isaac Haas stood out, scoring 25 for the Boilermakers (23-4, 12-2). Michigan State ran a stable of big men at him — senior Gavin Schilling the most success — and locked down the rest of the team. Only Carsen Edwards managed to reach double figures other than Haas and Purdue didn’t make a single 3-pointer in the second half.

“The key to the game was following the game plan,” Izzo said of not double-teaming Haas. “It could get frustrating and I could hear the fans moan when they kept throwing it in to him and he was getting his shot, but those were two points and sometimes the others are three points. That was the game plan and we executed it to a T.”

That included Purdue’s final possession with the game tied at 65. Haas got the ball on the block, but Schilling pushed him out just a bit more and Haas’ jump-hook came up short setting up Bridges’ winner.

“I just didn’t want give up any ground,” Schilling said. “The lower man wins, so I got lower than him and I was successful trying to do that.”

It capped off a game that nearly got away from Michigan State in the first half. The Boilermakers had built a 10-point lead late, but five Spartans points in the final minute made it 36-31 at the break.

Michigan State built off that momentum and took its first lead, 57-55, on a jumper from Bridges with 9:03 to play. It was extended to 59-55 on a drive from Bridges, but Haas answered with four straight points for the Boilermakers.

Haas then scored four straight to put Purdue ahead by two, but Kenny Goins hit a jumper from the free throw line with 46 seconds to play. After the Spartans got a stop, they called a timeout. Winston got the ball to Bridges, who hit the game-winner.

“It’s a huge win,” Winston said. “That’s a great team and I wouldn’t be surprised to see them down the road, that’s how good they are. For us to come out and pull it out and make some big plays — Kenny hit a big shot and Gavin had some big possessions. To have all the guys step up like that in a game like this shows the sky is the limit for this team.”