Gabe Brown has been on campus only a short time, but early workouts and several games at the Moneyball Pro-Am have hammered home one clear fact.

MSU recruit Gabe Brown dunks the ball and hangs on the rim for a moment during a game in the 15th Annual Moneyball Pro-Am tournament Tuesday at Aim High in Dimondale, Michigan. The competition, which takes place Tuesdays and Thursdays through Aug. 2, features current and former professional and collegiate basketball players. Dale G. Young, Detroit News
Fullscreen

MSU recruit Gabe Brown takes the ball to the rack for a basket under pressure. Dale G. Young, The Detroit News
Fullscreen

Foster Loyer passes behind his back and around MSU teammate Gabe Brown. Dale G. Young, The Detroit News
Fullscreen 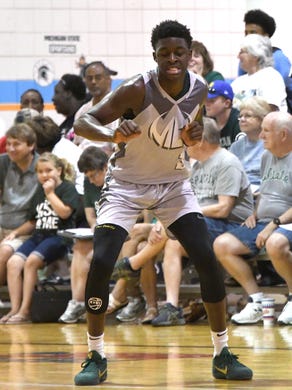 MSU incoming Thomas Kithier pulls down a rebound before feeding it to a teammate. Dale G. Young, The Detroit News
Fullscreen 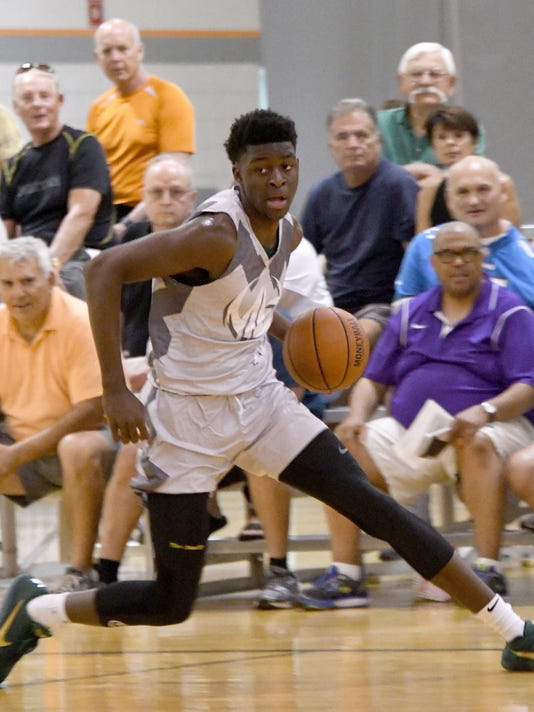 If there was any confusion, it has quickly disappeared for Gabe Brown.

The Michigan State freshman has been on campus only a short time, but early workouts and several games at the Moneyball Pro-Am have hammered home one clear fact: If the 6-foot-8 Brown expects to contribute in his first season under coach Tom Izzo, he’ll need to be tough.

“The eye-opening difference is you got to be tough to play Big Ten basketball, that's what I know,” Brown told The Detroit News. “That's what they teach me every day -- you've got to be tough. If you're not tough, then you can't play. And Coach, he pushes every day to be tougher. He wants us to be tougher every day. That’s one of the major things I had to realize.”

The four-star recruit out of Belleville got a quick reminder last week when facing Michigan State teammate Joshua Langford in a Moneyball game at Aim High Sports in Dimondale. He and the former McDonald’s All-American exchanged words late in their matchup and the next trip down the court, Langford gave Brown a gentle shove.

More: MSU's Loyer eager to prove, once again, he belongs

Langford got tossed from the game for what Brown describes as “brotherly love,” but Langford had a purpose.

“That’s what it is,” Langford said. “I do truly love all my teammates and especially with the freshmen, I want to get those guys ready to understand how high of a level they're going to have to compete in the Big Ten. It's not something they've ever been in, so it's going to be different for them.”

How quickly Brown navigates the move from top high school player who helped lead Belleville to the Class A quarterfinals last season to freshman for a top-25 team expecting to compete for a conference championship and make a deep run in March will have a significant impact on the Spartans.

Brown is one of a five-member freshman class, and while all might not play a huge role this season, some will have to. Brown, an athletic wing who can shoot the ball and has the ability to play several positions, could quickly move into a significant position.

“With Gabe, I think he can shoot the ball really well with his size,” Langford said. “That's kind of what the game is going to -- bigger guards who can shoot the long ball, catch and shoot. He can do that really well. I think with the way our coaching staff coaches, once he gets his body well, he'll start getting to the rim more and start playing inside-out and he'll change to a three-level scorer -- mid-range pull-up, outside 3, and getting to the rack. I think Gabe's game is going to progress well."

Gabe Brown: “The eye-opening difference is you got to be tough to play Big Ten basketball, that's what I know.” (Photo: Dale G. Young, The Detroit News)

While Brown has versatility, he understands he has a long way to go to be ready for the rigors of the Big Ten.

Just 193 pounds when he first arrived on campus, Brown is now up to 203 with the goal to reach 210 by the time school begins. A steady diet of protein shakes and time in the weight room will help him get there.

In the meantime, Brown has been putting in plenty of work in the gym.

“The summer has been real great,” Brown said. “Coach Izzo, it’s a blessing to be under him. Everything I look at right now is a blessing.

"I'm really just working on getting my strength up, ball handling, getting more consistent with my shot, becoming a great, great player with these guys.”

More: Niyo: MSU's Kithier glad to be back on court, not in one

In Michigan State’s summer practices, Brown has been working at the 2, 3 and 4 spots, though playing on the wing seems like the best fit at this point. It’s that strength he’s working on that will allow him to see more minutes at the 4.

That strength, too, will play a big role in the toughness that he has become keenly aware will be necessary to succeed.

Even if it takes a touch of “brotherly love.”