Beiein counts on LeVert to lead

Beiein counts on LeVert to lead

Freshman Dan Distler of Boston holds up a Miguel Cabrera face with fellow freshman Jeremy Parks of Grand Rapids, right, photos right before the game. Parks got the Miggy face at one of the ALDS games. Michigan wins 77-53 over Bucknell at Crisler Arena in Ann Arbor, Mich. on Nov. 16, 2014. Robin Buckson / Detroit News
Fullscreen

Michigan guard Zak Irwin reacts after he makes a basket in the first half. Irwin finished with a game high 23 points. Robin Buckson / Detroit News
Fullscreen 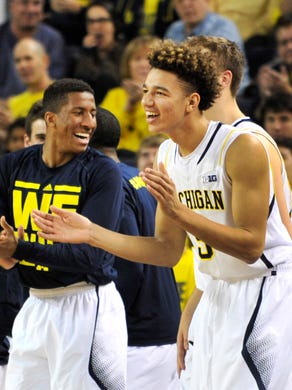 New faces on the team, J.D. Wilson, right, and Aubrey Dawkins cheer on their teammates in the first half. Robin Buckson / Detroit News
Fullscreen

Michigan head coach John Beilein greets Kameron Chatman when he heads back to the bench in the first half. Robin Buckson / Detroit News
Fullscreen

Michigan forward Mark Donnal reacts after makes a shot and gets a free throw in the first half. Robin Buckson / Detroit News
Fullscreen

Cheerleaders perform during a timeout in the second half. Robin Buckson / Detroit News
Fullscreen 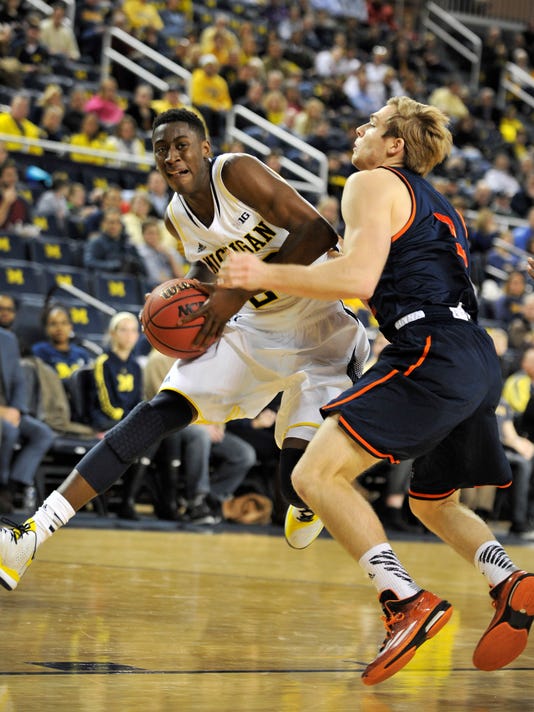 Ann Arbor — Caris LeVert is getting a quick introduction to the big time.

LeVert was named Monday to the preseason top 50 list for the Wooden Award. Award. LeVert, a junior guard, was a preseason Big Ten first-team selection after ending last year on the second team.

Last week, LeVert, a 6-foot-7 guard was named a UM co-captain for the season, along with Spike Albrecht. In the opener on Saturday, he made an early splash, with 20 points, eight rebounds and nine assists against Hillsdale.

It's a stat line that coach John Beilein values, especially with the way that LeVert took care of the basketball and helped run the offense.

"The nine assists and zero turnovers, that's something you can see, where we got the ball in his hands a lot," Beilein said. "He can see the floor; he's very unselfish. That was a really good performance."

As a sophomore, he averaged 12.9 points, 4.3 rebounds and 2.9 assists, playing alongside three NBA picks in Nik Stauskas, Mitch McGary and Glenn Robinson III. This year, though, LeVert will be one of the go-to players and will have a much larger role, both on and off the court.

That includes becoming more of a vocal leader, especially with a less-experienced roster that includes seven players with freshman eligibility. As two of the elder statesmen, LeVert and Albrecht will look to tag-team that task.

"Neither one is a holler guy and that's something we're teaching them," Beilein said. "We really pride ourselves in teaching that characteristic but it's not as natural to some."

As part of the regional round of the Legends Classic tournament, Michigan will honor former Wolverine Campy Russell as a "Legend of the Game" during halftime of Thursday's matchup against Detroit at Crisler Center.

Russell, dominated as a freshman, averaging 18.4 points and 9.6 rebounds, setting new marks for the freshman scoring and rebounding records during the 1972-73 season. He was a co-captain the following season and led the Big Ten in scoring at 23.7 points and added 11.1 rebounds.

"When coach Beilein invited me back, I knew it was something I could not turn down," Russell said in a statement. "It has always been an honor to represent the block M. I have so many fond memories of my time in Ann Arbor, returning to Crisler Arena is going to be a wonderful experience. I am really looking forward to meeting the team and seeing a game up close."

Russell, a Pontiac native, is the director of alumni relations for the NBA's Cavaliers.

Monday night's game against Bucknell and Thursday's matchup with Detroit are part of the regional round of the Legends Classic tournament. Michigan will advance to the championship round in New York even if it loses one of the regional games.

In the championship round at Brooklyn's Barclays Center, the Wolverines will face Oregon on Monday night and either Virginia Commonwealth or Villanova on Tuesday night.