For the last time in their careers on Saturday, 12 seniors will run out of the tunnel. 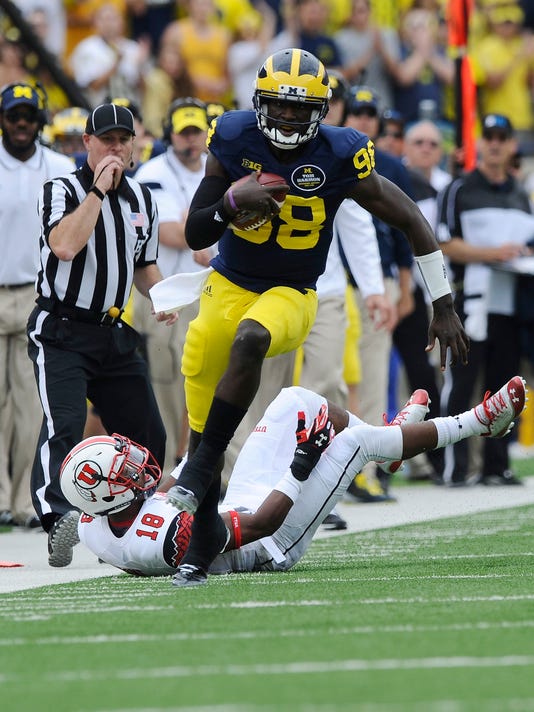 Devin Gardner has had plenty of ups and downs in his career, and says he’s excited to play his last game at Michigan Stadium.(Photo: Elizabeth Conley / Detroit News)

Ann Arbor — For the last time in their careers on Saturday, 12 seniors will run out of the Michigan Stadium tunnel representing Michigan at home.

As always, it is a bittersweet moment, a time to reflect on how quickly their years wearing the winged helmet have gone, the memories they have created and friendships they have built.

"It's gone very quickly," said senior linebacker Jake Ryan. "You've got to tell these younger guys you can't (take it for granted). It goes from freshman to senior year very fast.

"I'm going to be really excited," Gardner said. "It's never been about me, and it's not going to be about me. I'm going to go out and give everything I can like I've always given and try to get a win for the team."

Gardner, hobbled by a high left ankle sprain suffered Oct. 11, has been the team's full-time starter the last two seasons.

He and the Wolverines are on the brink of bowl eligibility at 5-5, needing one victory in their final two to qualify. Michigan ends its season next weekend at Ohio State.

"(My) last game in the Big House, it's going to be an emotional day and an emotional game," defensive lineman Brennen Beyer said. "Right now I'm focused on Maryland to make sure I have one of the best games I've had in that stadium."

Punter Will Hagerup has had an up-and-down career since arriving in 2010 under then-coach Rich Rodriguez. Hagerup, named the Big Ten punter of the year in 2012, has been suspended three times during his career. Coach Brady Hoke held him out last season until he worked his way back to reinstatement.

"It's definitely going to be an emotional game for me," Hagerup said. "There's 12 guys who will run out of the tunnel for the last time, who will hopefully jump in the student section and sing 'The Victors' for the last time. We want to win every single game we play. When we go out on Saturday, we don't want to win any more than we wanted to win in our first game in the Big House. I think more than anything, this game is about this whole team, playing their last game in the Big House and not just the seniors."

For Hoke, in his fourth season at Michigan, he has faced considerable challenges, particularly this season with so many off-the-field issues. On Monday, he announced the dismissal of senior defensive lineman Frank Clark, who was charged with domestic violence and assault following an alleged incident Saturday night with his girlfriend at a Sandusky, Ohio, hotel.

With speculation swirling regarding Hoke's future with the program, he said this week that seeing the seniors play their final game at Michigan Stadium will be emotional for him.

"No question about it," Hoke said. "You look at guys who have worked their tails off for four or five years, you look at guys as a coach and as a mentor, how they've grown and the progress, not just from the football standpoint, but guys who graduate, guys who grow as men."

And Gardner has said he has grown during his time at Michigan.