Michigan Wolverines quarterback Devin Gardner (98) shakes hands with fans as he makes he way back to the locker room. Elizabeth Conley/Detroit News
Fullscreen

Maryland Terrapins defensive back William Likely (4) knocks the ball out of Michigan Wolverines wide receiver Amara Darboh (82) arms and is called for passing interference in the first half. Elizabeth Conley/Detroit News
Fullscreen

Michigan Wolverines wide receiver Dennis Norfleet (23) runs back a punt for a touchdown, but was called back due to a penalty in the third quarter. Elizabeth Conley/Detroit News
Fullscreen

Michigan's special teams celebrate the Michigan Wolverines wide receiver Dennis Norfleet (23) touchdown run before it was called back because of a penalty in the third quarter. Elizabeth Conley/Detroit News
Fullscreen

Michigan's veteran of the game, Steve Szopo, a WWII Vet, waves his cap as he is introduced on the field during the game. Elizabeth Conley/Detroit News
Fullscreen

Michigan Wolverines wide receiver Amara Darboh (82) is taken down by Maryland Terrapins defensive back Jeremiah Johnson (14) after getting a first down in the fourth quarter. Elizabeth Conley/Detroit News
Fullscreen 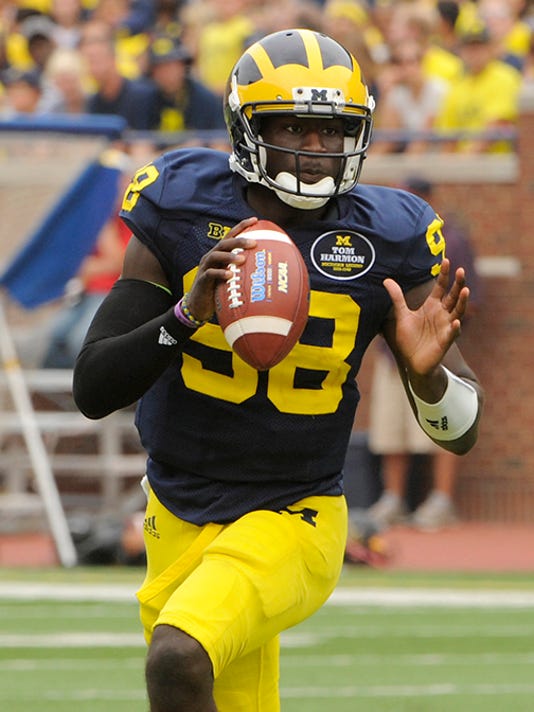 Ann Arbor – This one felt like a must-win entering the game.

Michigan has five victories this season and needs one more to make a bowl game, and with two games remaining, Saturday's matchup with Maryland looked like the Wolverines' best bet to become bowl eligible

But the Wolverines could not generate scoring in the fourth quarter, succumbed to errors in the kicking game and the Terrapins' hurry-up offense and fell, 23-16, before an announced crowd of 101,717 at Michigan Stadium.

Michigan is 5-6 overall, including three losses at home. It was the last home game for the 12 seniors.

Michigan has one last chance to reach six wins and bowl eligibility, but that will be a difficult task. After all, the Wolverines finish the regular season next week at Ohio State, ranked No. 7 nationally, and winner of nine of the last 10 meetings with Michigan.

"I'm hurting after the game emotionally because I've been with these (seniors) going on three years," said running back Drake Johnson, who had 94 yards on 14 carries to lead Michigan which had 292 rushing yards. "You see how much the game means to them, how much the game influences their lives. You see how much work they put into it. It hurts seeing something like that happen and having it end this way. It sucks to watch and sucks to have happen."

After breaking a 9-9 tie on the first possession of the second half with quarterback Devin Gardner's 15-yard scramble for the game's first touchdown, the Wolverines appeared to expand that lead following Maryland's series in which the Terrapins followed a false start with a six-yard sack.

Michigan's Dennis Norfleet, back after missing the Northwestern game with an undisclosed injury, returned the ensuing punt for a touchdown. But the return was called back after a block in the back.

During Maryland's next series, the Terrapins' kicker Brad Craddock, perfect on field goals this season, attempted a 35-yarder. But Jourdan Lewis was called for roughing, giving them a first down. Quarterback C.J. Brown scored on an eight-yard run to tie the game, 16-16.

On the field goal, (Lewis) was trying to make a play," Michigan coach Brady Hoke said. "He was a guy who was supposed to be coming hard off the edge. I guess he hit him hard enough for a 15-yard personal foul."

Until those errors, the Wolverines thought they had things rolling.

"Those two things we shot ourselves in the foot," center Jack Miller said. "You feel like we kind of had a chance to run away with it a little bit and weren't able to. We allowed them to hang around and they capitalized on it."

After Matt Wile missed wide left on a 39-yard field goal — he had made all three attempts in the first half — Maryland moved from the Terrapins' 22-yard line, driving 78 yards on 10 plays. Wes Brown gave the Terrapins the lead on a 1-yard touchdown run with 5:59 left.

Michigan turned over the ball on downs its next drive, having gone for it on fourth-and-3 with one timeout remaining. Hoke burned two timeouts in the third quarter, one before a fourth-and-6 play when Gardner threw behind and incomplete to Devin Funchess. Hoke also called timeout during Maryland's next drive, which culminated in the field goal that tied the game, 16-16. Maryland had gone to a hurry-up offense.

"Trying to help the defense a little bit," Hoke said after the game, regretting he didn't have additional timeouts late in the fourth quarter. "I don't like doing that and (defensive coordinator) Greg (Mattison) doesn't like doing it, but the way the game was going at the time, we thought we'd try and slow it down a little bit."

"I think they got to us a little bit," Bolden said. "We got away from our fundamentals and got away from the defense we were playing in the first half."

His receivers didn't help him the entire time, though. Freddy Canteen dropped a sure touchdown on the opening drive and Michigan settled for a 22-yard field goal from Wile.

This was the healthiest Gardner has been since suffering a high left ankle sprain in the Penn State game in mid-October, and he rushed for 82 yards and a touchdown.

I thought Devin did an awful lot of good things today," Hoke said. "Just like everybody else, he wasn't perfect. This is the first game he felt really good with his ankle. That allowed him to make some plays with his feet, which he can do very well. He had some balls that were catchable that we didn't catch. We've got to do a better job with that. "