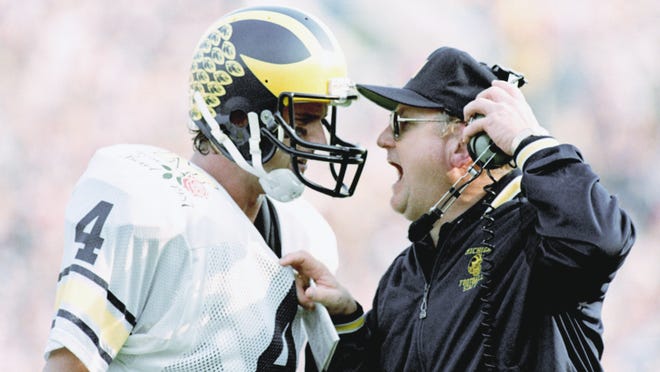 Jim Harbaugh, who coached his final game with the San Francisco 49ers on Sunday, was asked almost immediately after the game whether he will be Michigan's next head coach.

All signs have pointed to Harbaugh returning to his alma mater, where he was a quarterback in the mid-1980s under legendary coach Bo Schembechler. He is expected to be introduced at Michigan during a Tuesday news conference and during the Michigan-Illinois basketball game, according to a source with knowledge of the situation.

"There will be announcements made concerning those things," Harbaugh said during his postgame news conference Sunday night after the 49ers beat the Cardinals, 20-17.

Shortly after the conclusion of the news conference, the 49ers released a statement indicating the organization and Harbaugh have "mutually agreed to part ways."

Harbaugh had one year remaining on his contract. He was 49-22-1, including the playoffs, in four seasons with the 49ers and took the team to three straight NFC championship games before failing to make the playoffs this year.

Before Harbaugh's arrival, the 49ers were 46-82 in the eight previous seasons.

"Jim and I have come to the conclusion that it is in our mutual best interest to move in different directions," 49ers CEO Jed York said in the release. "We thank Jim for bringing a tremendous competitive nature and a great passion for the game to the 49ers. He and his staff restored a winning culture that has been the standard for our franchise through its history. Their commitment and hard work resulted in a period of success that should be looked back on proudly by our organization and our fans. We wish Jim and his family all the best."

Before the game, Harbaugh ran onto the field from the tunnel. He shook hands and had a brief, awkward hug with York. Harbaugh had fallen out of favor with 49ers management this season and was not expected to return for the fifth and final season of his contract.

After the victory, the players gave Harbaugh a Gatorade shower.

"Things that were accomplished here were very, very good," Harbaugh said of his career in San Francisco, before being asked if he was sad about the separation. "I don't have the words for it. As I've said all along, you work at the pleasure of the organization. It's been a tremendous four years, and it's been a pleasure to work and serve this organization. I feel great about what we accomplished."

Harbaugh was asked if he planned to participate in the 49ers regularly-scheduled news conference on Monday.

Michigan has been without a coach since interim athletic director Jim Hackett fired Brady Hoke on Dec. 2, three days after a loss to Ohio State and a 5-7 season. Harbaugh has been the primary objective of Hackett during this coaching search.

While Harbaugh wouldn't specifically say what his future holds, he had a humorous answer when asked at the postgame news conference if he will miss the NFL in any way.

Not coincidentally, the Michigan basketball program posted on Twitter that there were no tickets available to Tuesday afternoon's Big Ten opener against Illinois. A week ago during a check of StubHub, there were more than 1,000 tickets available and the low price was about $30. As news began trickling out Saturday that Harbaugh-to-Michigan was a strong reality, ticket prices increased to about $80, and there were fewer than 100 tickets. By Sunday, the cheapest ticket was about $130.

Michigan officials, however, have remained mum on the subject of Harbaugh.

Michigan has been tight-lipped during the Hackett-run search process.

For weeks, NFL insiders have said there was no chance Harbaugh, 51, who took the 49ers to the Super Bowl in his second season, would leave for Michigan. Early Sunday, while some NFL experts like NFL.com's Ian Rapoport cautioned that Harbaugh had not yet signed with Michigan, most said all indications pointed to Harbaugh returning to the Wolverines.

"They believe Jim Harbaugh will be their next coach, and they hope to bring him home from California tonight or possibly Monday after Harbaugh meets with his players and meets with 49ers brass and informs them what he wants to do," Rapoport said Sunday morning on the NFL Network, referring to Michigan officials.

"I'm told at this point no firm deal is in place, nothing is signed, but Michigan officials hope there will be one after tonight's game. But the Oakland Raiders have not been told they are out, that is worth noting."