Brian Cole spoke with Harbaugh after his practice on Tuesday. 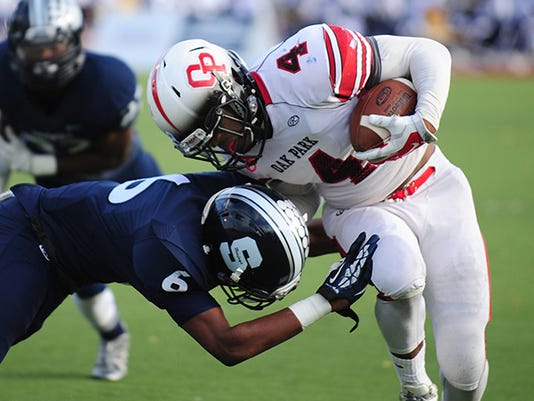 Oak Park’s John Kelly on Jim Harbaugh: “As long as he contacts me and my family, the chances of me ending up there will definitely increase.”(Photo: Bryan Mitchell / Special to Detroit News)

Jim Harbaugh takes over as Michigan's new head coach and inherits a recruiting class that currently sits at six commits. He has just over a month before National Signing Day on Feb. 4 to fill that class out. The class is not expected to be a big one, so he will not have to attempt to sign nearly a full 25.

His efforts started with the committed players. Saginaw Heritage wide receiver / defensive back Brian Cole had taken official visits to other schools, but told Scout's Bill Greene at the Under Armour All-American Game in Orlando that he was now completely solid to Michigan and was set to enroll in a few weeks. Cole spoke with Harbaugh after his practice on Tuesday morning.

Huber Heights (Ohio) Wayne safety Tyree Kinnel, who had previously flirted with the idea of visiting Notre Dame and Michigan State, reported to Scout's Dave Berk that he was now solidly committed to the Wolverines and will not take any visits.

"I think it's very exciting," Kinnel told Berk. "I think they did a great job getting the coach they wanted and the coach we need. I know the whole Michigan fan base is very excited, as well."

Class of 2016 offensive tackle commit Erik Swenson has fielded interest from many schools through the last month, but despite overtures from those programs to get him on campus, asserts that he will not take any visits and that his commitment status has not changed.

"I think it's awesome," Swenson said of Harbaugh's hire. "I think he brings a really good fit to Michigan and I really think he can turn this program around."

The committed players seem to be back to solid, so the job of Harbaugh and his eventual staff will be to go after players who are either uncommitted or committed to other programs, but may be open.

Detroit Cass Tech running back Mike Weber, once a Michigan commit and now an Ohio State commit, has maintained his status with the Buckeyes, despite early contact between his family and Harbaugh already. Still, he remains a legitimate target for the new Wolverine regime.

One of his best friends, Oak Park's John Kelly, a prolific running back the Wolverines are pursuing as a defensive back, said this new hire has set the stage for him to potentially end up in Ann Arbor.

"The hiring of Coach Harbaugh is a great thing for Michigan," he said. "As long as he contacts me and my family, the chances of me ending up there will definitely increase."

Notre Dame commit Shaun Crawford, a cornerback from Lakewood (Ohio) St. Edward, was also once committed to Michigan, but reconsidered and gave his verbal to Notre Dame. When asked if he would have interest, Crawford said he will remain committed to the Irish, but would take Harbaugh's call out of respect.

O'Fallon (Ill.) junior running back Kentrail Moran has more than a year before he has to sign, but he has a Wolverine offer, and news of the Maize and Blue's new head coach may have sped up his timeline.

"When he gets there, I'm going to set up a visit," Moran said. "I'm excited to see what they are planning for the next season and how hard they are working to turn the program back around."

Moran added that he may make a commitment this summer.

Two West Coast prospects who made note of the hire are Long Beach (Calif.) Poly cornerback duo Iman Marshall and Colin Samuel. Marshall, a highly-ranked prospect, has been talking about visiting Michigan with Samuel, and Harbaugh's hire has made that possibility more likely.

"I think who the defensive coordinator is will have a big effect there," said Scout.com West Coast analyst Brandon Huffman.

Fellow West Coast analyst Greg Biggins believes guys like Marshall and Samuel could become the norm for Michigan with Harbaugh at the helm.

"Harbaugh was a very good recruiter at Stanford but more so as an evaluator than simply a guy who went out and recruited the top guys," Biggins said. "He had an incredible eye for talent and found players no one really expected much from and turned them in to all-conference athletes. He's a grinder and had a tireless work ethic, and that carried over to his staff. Stanford has always been one of the toughest places to recruit head-to-head with, and with Harbaugh at the helm, they rarely lost any of those battles."

Of course, recruiting is just one piece of a successful program, but it starts there, and in this first month on the job, recruiting will no doubt be a primary focus for Harbaugh. If the early reactions from recruits are any indication, he has a strong chance to salvage a class that was recently depleted by decommitments.

Michigan lost recruits in the past few months as the Wolverines struggled through a 5-7 season and eventually fired coach Brady Hoke. Here are the six in the 2015 class that remained committed (national rankings by Scout).

Allen Trieu began covering the state of Michigan for Scout.com in 2005 and began managing the entire Midwest in 2009. He has been featured on the Big Ten Network on its annual Signing Day Show. His Michigan and Michigan State recruiting columns appear weekly at detroitnews.com.