It appears Harbaugh is working quickly to assemble his staff at Michigan. 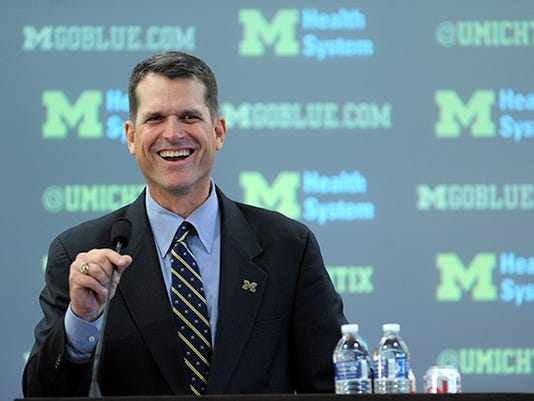 Jim Harbaugh was introduced as Michigan's new coach on Tuesday, and now he has to determine his supporting cast.

And it appears Harbaugh, who spent the last four seasons as head coach of the San Francisco 49ers, is working quickly to hire his staff and have personnel in place before meeting with the players early next week after they return from break.

"We're in the process right now and can't tell you that it's going to move fast or slow," Harbaugh said Tuesday of his staff hiring. "But hopefully it will move right. And that's what we'll strive for. Measure twice, cut once."

Tim Drevno and John Morton, who have had long working relationships with Harbaugh, might join his staff at Michigan, according to a report Wednesday in the Sacramento Bee.

There is considerable speculation Drevno, who spent the last season as offensive line coach / run game coordinator at USC, will be the Wolverines' offensive coordinator. Zach Banner, a USC offensive lineman, wrote on Twitter Wednesday that he is "happy for Coach Drev and wish him luck with his new job because he deserves it. He has a great opportunity. I love the guy."

Drevno, 45, worked with Harbaugh when he was head coach at San Diego and Stanford and worked for him on the 49ers' staff as offensive line coach for three seasons until moving to USC.

Drevno would replace Doug Nussmeier, who was Michigan's offensive coordinator for one season. Nussmeier took the same position at Florida last week.

Morton, a Michigan native who played two seasons at Western Michigan (1991-92), spent the last four seasons with San Francisco. He also coached with Harbaugh for one season at San Diego in 2005. The 45-year-old is a receivers coach.

D.J. Durkin currently is interim head coach / defensive coach at Florida and has a bowl game to coach, but his name has been linked to Michigan and Harbaugh as defensive coordinator. Durkin, 36, coached for Harbaugh at Stanford from 2007-09 and was in charge of the defensive ends and was special teams coordinator.

During an appearance Tuesday on the "Rich Eisen Show," Michigan interim athletic director Jim Hackett said he and Harbaugh were busy budgeting for the assistant coaches. Last year, Michigan's budget for assistant coaches' salaries was $3,504,323, just behind Ohio State's $3,592,025 among Big Ten schools.

"We're in great shape," Hackett said on the radio show. "He feels really good about the commitment by the University of Michigan.''

It is unclear which, if any, of the former assistants under Brady Hoke, who spent the last four seasons as Michigan's coach, will be retained.

Among the coaches Harbaugh might consider are Greg Mattison, Fred Jackson and Roy Manning. Mattison was the Wolverines' defensive coordinator, Jackson the running backs coach and Manning the cornerbacks coach. They have been considered high-level recruiters for Michigan.