Hatch survived two plane crashes and recovered from life-threatening injuries not only to walk again, but also to get back on the basketball court.

Ann Arbor -- In his first season with Michigan, Austin Hatch provided one of the most memorable moments of the year, entering a game against Coppin State and hitting a free throw.

Those memories are enough for Hatch to leave his basketball career on the high of his accomplishments in his freshman season.

UM announced Monday that Hatch will reclassify from a scholarship player on the active roster to a medical scholarship, ending his playing career. He will remain as an undergraduate student assistant next season.

Hatch survived two plane crashes that took the lives of his mother, father and two siblings. He recovered from his life-threatening injuries not only to walk again, but also to get back on the basketball court.

Michigan coach John Beilein said the decision to place Hatch on a medical scholarship was "something he and I discussed quite a bit over the last couple of months after almost a year of observing his progress both on and off the court. It seems like the right thing to do after a lot of discussion."

Beilein and Hatch met with reporters Monday to discuss the decision. Hatch said it was not a tough decision to accept a non-playing role.

"The fact of the matter is my academics is a priority for me," said Hatch, who is studying business. "I'm not going to be a pro basketball player, but I'm going to have to learn and become a pro at something in life, so I'm excited with the opportunity to focus on my studies."

Before Hatch's second plane accident, Beilein was adamant that he would honor Hatch's basketball scholarship after Hatch committed in 2011. Hatch recovered to play in a high school game — sinking his first shot in his first game back — and in his first game at Crisler Center, hitting a free throw in an exhibition against Wayne State.

Hatch and Beilein have developed a strong relationship over the years, and especially since Hatch arrived in Ann Arbor.

"He's become like a son to me and that's been a great part of our relationship," said Beilein.

Said Hatch: "Coach Beilein and I have become very close. He's just a great man. He's such a great man to have in my life, especially after all I've lost and been through.

"I think he's 10 times the man that he is the coach, and as we all know, he's obviously a great coach. I know for a fact that there's nowhere on earth that my father would rather me be than at the University of Michigan playing for a coach like Coach Beilein."

While this is the end of the basketball playing portion of Hatch's career, he will continue to be an inspiration and important voice in Michigan's practices. As an undergrad assistant, Hatch will be able to travel and can participate in team activities.

"It's been a tremendous story of grit, confidence and hard work that I think will continue in the right way," Beilein said Monday in his meeting with reporters at the Crisler Center.

"He will help us as a student assistant. What assignments I'm going to give him, I don't know right now. This will allow him to really concentrate and focus on his academics and serve us in other ways, community relations. I think that will be a great thing for him, to represent our program by speaking to young people all over the country." 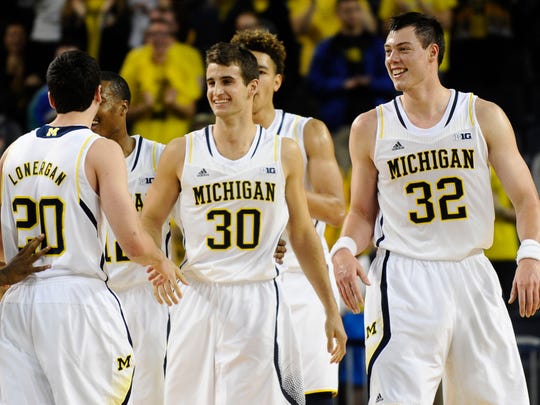 Austin Hatch, center, will reclassify from a scholarship player to a medical scholarship and will be an undergraduate student assistant next season. (Photo: Elizabeth Conley / The Detroit News)

The decision opens a scholarship for the Wolverines, who are recruiting 2015 wing Jaylen Brown — one of the top players in the country — and former VCU commit Kenny Williams, as well as other options for next season.

Brown, a 6-7 forward from Marietta, Ga., is ranked the No. 1 player overall in the nation for 2015 by Scout.com. Williams, a 6-3 shooting guard from Chesterfield, Va., is ranked a four-star prospect by Scout.com.

Hatch earned the Most Courageous Award from the United State Basketball Writers Association last season and has been featured on ESPN and several national news shows for his perseverance.

Hatch played in Michigan's 72-56 win over Coppin State Dec. 22 at the Crisler Center, taking a 3-point attempt and scoring a point, making 1-of-3 free throws while getting a standing ovation.

"Those will be memories I have for the rest of my life, scoring in the Crisler Center, representing the University of Michigan, that's something I'll never forget, and just the brotherhood that I have formed here with my teammates," Hatch said.

"All my teammates have really embraced me and they appreciate all that I can contribute to the team in whatever capacity. They are all just a great group of guys."