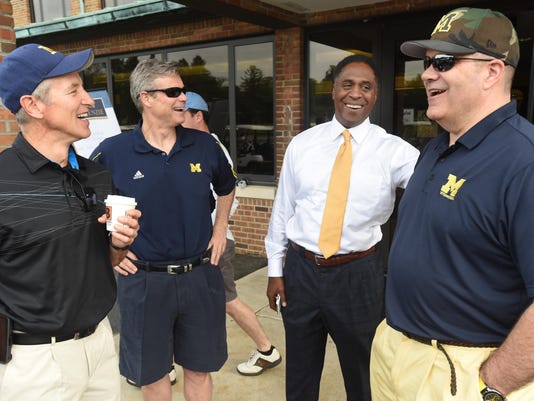 Ann Arbor — Jim Harbaugh has been on the job as Michigan's football coach for nearly five months, and he has heard from fans on a number of topics.

During a stop Monday at the Swing to Cure Diabetes golf outing at the UM Golf Course, hosted by former teammate Rich Hewlett, Harbaugh dropped in fresh off a mission trip to Peru.

Harbaugh said he wanted to support Hewlett and the event he started with his late wife, Chris, seven years ago to help children like their son, Jeff, now a senior at Michigan. Jeff was diagnosed with Type 1 diabetes when he was 4. The event raised an estimated $140,000, which will be equally divided between the UM Comprehensive Diabetes Center and the Juvenile Diabetes Research Foundation.

After making remarks to the participants during lunch, Harbaugh offered to take questions.

Toward the end, a young boy piped up and asked something many Michigan fans likely want answered.

"Can we please beat the Buckeyes this year?" he asked, sparking laughter and applause from the gathering.

For Harbaugh, who has made several trips to Peru, calling the missions "life-altering" after facing poverty face-to-face and saying it feels like a return home when he visits, it is now back to focusing on football.

He has an eager fan base that wants Michigan lifted from the doldrums of the last seven seasons. When one golf participant asked what Michigan's goals will be, another chimed in and said, "Win all of them!"

Harbaugh smiled and paused for effect.

It was important for Harbaugh to attend Hewlett's outing because he considers him one of the best individuals he has met. They were teammates for two seasons at Michigan.

"You've got Rich Hewlett as a friend, you've got something really special," Harbaugh said. "Class act in everything he does, everyone he associates with. How does a guy go through life without anybody ever having a negative thing to say about him? I don't know too many people like that."

Hewlett and his late wife, Chris, who passed away three years ago, wanted to raise money for diabetes research in honor of Jeff.

"We've attacked it as a family," Hewlett said. "When Chris was here, she was the big motivator. As a mom, you can imagine how this event was important to her to help Jeff and kids who are similarly situated. This is a great day for us, but it gives us a chance to reflect on Chris a little bit. She would be happy to see us forging ahead."

Jeff Hewlett said he did the math recently and figures he has given himself at least 25,000 shots for his diabetes.

"That makes it tough, but for the most part it's something that has to become second nature," Jeff said. "You really don't have a choice. You either let your health go or take the shots as they come."

The Hewlett family has raised close to $500,000 for both research agencies the last seven outings.