Satellite camps are no big deal to Big Ten ADs

Big Ten commissioner Jim Delany defended the idea and many of the conference's athletic directors echoed his thoughts.

Satellite camps are no big deal to Big Ten ADs 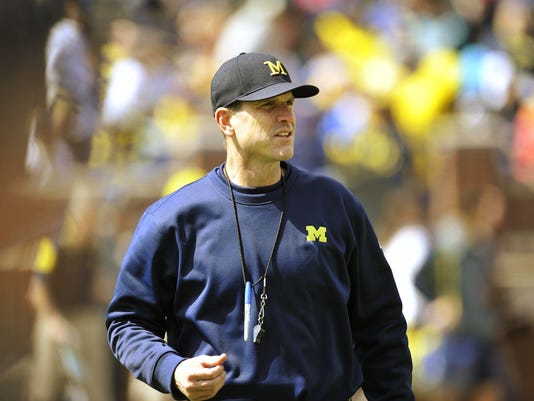 When Michigan football coach Jim Harbaugh announced he and his staff would take part in nine satellite camps across the country, his counterparts in the Southeastern Conference cried foul.(Photo: John T. Greilick / Detroit News)

Rosemont, Ill. — When Michigan football coach Jim Harbaugh announced he and his staff would take part in nine satellite camps across the country, his counterparts in the Southeastern Conference cried foul.

Alabama coach Nick Saban called the practice "ridiculous," which is likely due to the fact he is unable to do the same thing. Conference rules in the SEC and Atlantic Coact Conference prohibit coaches from working a camp outside the 50-mile radius of their schools. The Big Ten does not apply that rule.

Big Ten commissioner Jim Delany defended the idea at the time, and Tuesday during the Big Ten spring meetings, many of the conference's athletic directors echoed his thoughts.

"I think that's an ACC/SEC issue," Purdue athletic director Morgan Burke said. "It's not real high on our list of items. … Why should it bother us? Maybe I'm not close enough to the issues being raised by my colleagues in the ACC and the SEC. But if someone wants to spend their money and that's how they want to spend their recruiting dollars to do something like that, I say, 'What's the problem?' "

Burke said coach Darrell Hazell and his staff will take part in a camp in Nashville, Tenn., this summer, and added it makes sense, at least at Purdue, for the coaches to go to the players.

"We're gonna do one in Nashville this year and it is about six hours from Indianapolis, which is a logical spot for us," Burke said. "It's hard for some of these kids to spend the money to get to see us and the camps have gotten expensive to get to."

Iowa athletic director Gary Barta agreed with Burke, and said he and his colleagues in the Big Ten have discussed the issue informally. He and others in the conference, however, believe there are bigger issues in recruiting than satellite camps.

"Making sure there's a level playing field with signing or oversigning," he said. "Whether or not we should offer early so students can get on with their regular high school enjoyment. Those are important things. Once they're on our campus, offering them multi-year scholarships. Things that make the recruiting process better for students are things we're taking a look at. ... There are so many other things."

As Delany said in late April, "Coaches coaching at camps doesn't strike me as a bad practice."

"I'm really interested in the conversation," Ohio State's Gene Smith said. "I have concerns about how far we're going (with them)."

Added Minnesota athletic director Norwood Teague: "I know they're problematic for a lot of other leagues and in the end I'm sure something will come down in terms of regulation. … But some people see a way that it benefits them. And, hey, good for them for being creative. But I think there are bigger issues we all face in recruiting and outside recruiting."