"There's a little different focus, I think," Grbac said Saturday while working at Harbaugh's "Aerial Assault" high school quarterback camp. "I saw it in the spring practices. Spring practices were four hours long — that's old school. I just think there's a little bit more intensity to it and more focus to it."

Todd Collins, who followed Grbac as Michigan starting quarterback in the early '90s, said it has been tough to see the Michigan program in decline since 2008.

"It's been difficult," Collins said. "Even after I left, and of course Lloyd (Carr) was here, I used to always say Notre Dame had dips and other great programs had peaks and valleys whereas Michigan has always been (even keel). Not national champs every year but they've been solid.

"That's one thing we could always avoid, but then finally I guess it's inevitable we have that turnover and change and that's what makes it so difficult to compete is when you have different regimes coming in and changes in leadership. Just goes to show you how fortunate Michigan was in the past to have basically the same regime in place for 30-something years. Hopefully we can get on another 30-year run starting now."

Football, Grbac said, is a "very specific sport" that needs detailed preparation. He said Harbaugh, who wants to win immediately, has brought that kind of intensity to practices.

"You could say it's old school but it's more focused than what I'm used to," Grbac said. "His name, what he's done everywhere he's been, he brings his reputation and the tradition here and him being a part of that (at Michigan).

"Time will tell. Look at his record at Stanford, it's going to take time, he's got to get kids in. I think he's on the right track. You could say he's a Michigan guy, he's old tradition, but he knows being at the other level, the higher level, that you have to produce. He understands that."

Collins said he appreciates Harbaugh's enthusiasm, even when delivering a speech to the high school quarterbacks at camp.

"He's into it," Collins said. "I know for the former players at Michigan, we're just thrilled to have him get the job. We've seen what he's done at the other spots. He's going to bring back the brand of Michigan football that I think everybody wants to see and what this program was built on."

Quarterbacks do push-ups before breaking out into smaller groups. Todd McInturf, The Detroit News
Fullscreen

Quarterbacks put their footballs under their shirts to keep them dry while it was raining Saturday. Todd McInturf, The Detroit News
Fullscreen

Devin Gardner now with the Pittsburgh Steelers, throws a football as he laughs with a student. Todd McInturf, The Detroit News
Fullscreen 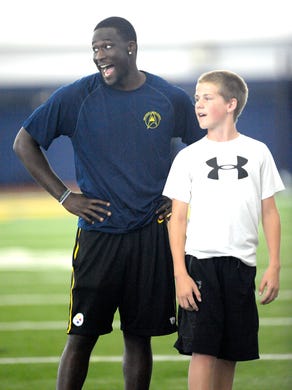