Trieu: 'Huge get' Bredeson could have instant impact on UM line

While early playing time is never a guarantee for any recruit, the depth chart at Michigan was part of his decision.

Trieu: 'Huge get' Bredeson could have instant impact on UM line 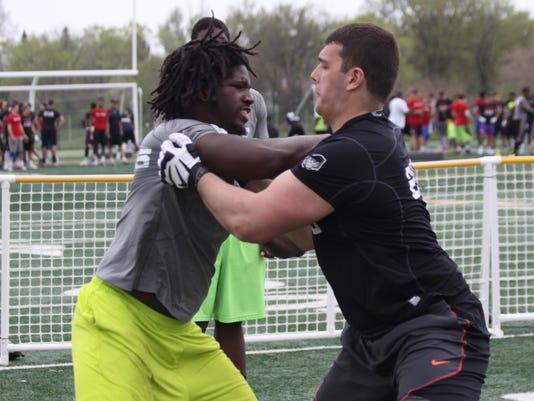 Michigan added their highest-ranked commitment of the 2016 class last week when Hartland (Wis.) Arrowhead offensive lineman Ben Bredeson, the nation's No. 25 overall player on Scout and No. 1 guard prospect, chose the Wolverines over offers from Wisconsin, Ohio State, Alabama, Notre Dame and many others.

While early playing time is never a guarantee for any recruit, the depth chart at Michigan was part of his decision, and should he compete for time off the bat, it is something with which he is accustomed. Bredeson (6-5, 285 pounds) started at left tackle for Arrowhead as a 230-pound freshman, earning all-conference honorable mention and helping his team to an undefeated record and state title that year.

It was clear then he would be highly recruited.

Joe Panos was one of his coaches that year, and as a former All-American offensive lineman at Wisconsin and third-round NFL draft choice, Panos knew a thing or two about the position and he had a feeling he had something special.

"His temperament is huge. If a dog bites as a puppy, it will bite when it gets older and he was extremely impressive as a freshman."

Bredeson's older brother Jack will attend Michigan beginning this fall on a baseball scholarship. He says Jack never pressured him or tried to influence him beyond wearing a lot of Maize and Blue around the house. And while he is excited to join his brother in Ann Arbor, he had to find the right fit for himself, and he says the staff at Michigan was a big part of that, especially Greg Mattison, who bridged the gap between the previous staff and the new one.

"I'm a big fan of Coach Drevno, the new line coach and coordinator there," Bredeson said. "He and I got a good relationship going right away. Once I heard he was hired, we got together and we talked. It was great having Coach Mattison there. It was not as a big of a culture shock for me. I had a way in, and once I got a chance to talk to Coach Drevno. He's a great guy and Coach Harbaugh, I've talked to him on the phone a few times; he's a good guy."

Bredeson's impact for this class is big in a number of ways. Other recruits have already taken notice of his addition and he comes in at a position of need.

"It's a huge get," The Michigan Insider's Sam Webb says. "Offensive line is a big priority in this class. Even though he was targeted as an inside guy, he brings versatility, and if they needed him to play outside, he could potentially do that. He does bring the type of size and athleticism to the table that's necessary to compete early even on the offensive line if he proves worthy. That's the one thing about Jim Harbaugh, he will give freshmen an opportunity if they show they're the best guys."

Will that be Bredeson? Even if it is not his freshman year, the odds seem likely he will be a major impact guy for the Wolverines at some point.

"It's really, really early," Panos said. "He has, like I said, the tools and the makeup to be a very good football player, and obviously, I'm not the only one to think this because he had all those offers and could go to school wherever he wanted. You can never predict the future, but if he has a healthy career, he can be very, very good."

According to The Michigan Insider's Brice Marich, Michigan picked up a commitment from Old Montreal cornerback Benjamin St-Juste (6-3, 175 pounds), who was a standout at the Wolverines' "Exposure U" camp in Ann Arbor earlier in the month. Because of the difference in Canadian schools and their classification procedures, St-Juste could count into the 2016 or 2017 class.

Farmington Hills Harrison defensive end Khalid Kareem, a four-star prospect with nearly 40 offers, will announce his commitment at Harrison on Wednesday. With choices ranging from Alabama, South Carolina and Mississippi State, to Ohio State, Notre Dame and many others, Kareem is expected by most experts to choose the Wolverines.

Allen Trieu began covering the state of Michigan for Scout.com in 2005 and began managing the entire Midwest in 2009. He has been featured on the Big Ten Network on its annual Signing Day Show. His Michigan and Michigan State recruiting columns appear weekly at detroitnews.com.