"It was a fantastic run by Ty Isaac," Michigan coach Jim Harbaugh said. 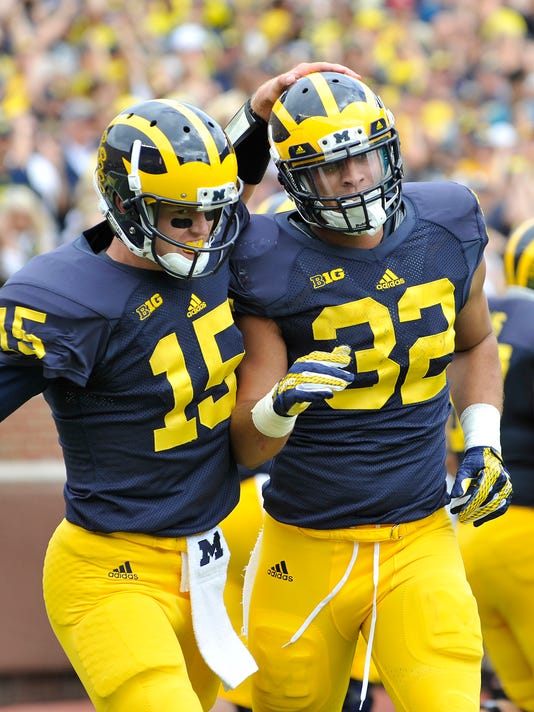 Ann Arbor – Tailback Ty Isaac transferred to Michigan last year from USC and because of NCAA rules sat out the 2014 season. He practiced and watched. Watched and practiced.

Against UNLV on Saturday, the 6-3, 228-pound Isaac gave the Wolverines a big boost. De'Veon Smith had been the top back the previous two games, but Isaac led all rushers with 114 yards on eight carries, including a 76-yard touchdown run that gave Michigan a 21-0 lead late in the first half.

"It was a fantastic run by Ty Isaac," Michigan coach Jim Harbaugh said. "We didn't block it right, not blocked the way we drew it up. I thought it was going to be a tackle for loss, and Ty did a real good job. Somehow he swerved, he avoided, he made a tackle miss, bounced off another and was off to the races. It was the darnedest thing I've seen in a long, long time."

Isaac said his teammates took care of their assignments and the running lanes "opened up."

Niyo: No offensive identity for UM, but no time to panic

He seemed relieved to finally make a difference in a game.

"As far as contributing, obviously it feels good," Isaac said. "I've been here for a year without playing, doing a lot of practice-squad stuff. I know that stuff helps the team, but it feels a lot better when you can put it on the scoreboard and you can help your team win."

His teammates were happy to see Isaac have such a successful game, especially the touchdown run.

"When you sit out like that and you haven't played a whole year, it's obviously frustrating to go out there and play and practice but you can't play in games," receiver Jehu Chesson said. "It was a heck of a run. He's been doing it in practice. Nobody sees practice or sees how hard somebody runs in practice or how hard he runs."

Isaac said the depth of Michigan's running backs is a strength. Smith ran hard the last two games and had three rushing touchdowns last week. He had a 5-yard TD reception against UNLV. Drake Johnson is gradually seeing more playing time as he continues to recover from a torn anterior cruciate knee ligament. Johnson had five carries for 28 yards against the Rebels. Derrick Green had 10 yards on three carries, Ross Taylor-Douglas had one carry for three yards, and fullbacks Joe Kerridge and Sione Houma both were active in the run game.

"That's the nice part about us having a deep running back room," Isaac said. "If one guy's not going, somebody else in that room is going to be able to go. If it's not De'Veon or it's not me, you have Drake, Derrick, Ross Taylor-Douglas."

Harbaugh said after the game there's no such thing as a running back controversy at Michigan.

"We're going to play as many good players as we can," Harbaugh said. "(And) try to put them in as many roles where they can be successful."