Jordan Poole isn’t one for waiting around. 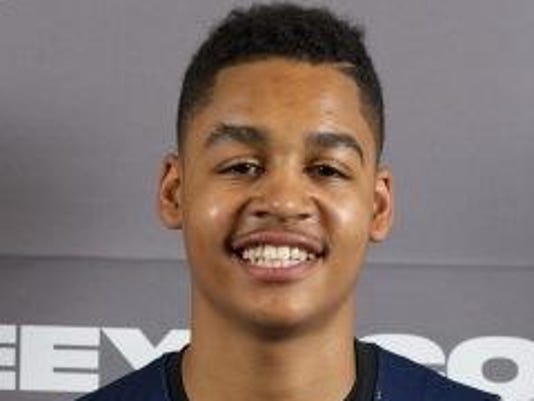 Jordan Poole is the Michigan basketball team’s first recruit for the 2017 class.(Photo: Scout.com)

Jordan Poole isn’t one for waiting around.

For instance, he didn’t wait around to make an immediate splash at Rufus King High School in Milwaukee.

In a sectional final game his freshman year — a game his coach said King “had no business winning” — King was down three with 4 seconds to play, so Jim Gosz looked over to the bench, called Poole into the game, and called for the ball to go Poole.

And Poole, a freshman with nerves of steel, drained the shot, sending King past Racine Case and on to the state tournament.

“He had a lot of poise, a lot of maturity and a great deal of confidence for that age level,” Gosz said over the phone Monday. “He knows he’s gonna be great. I think the one thing about him, he’s willing to put the time in and the work.”

That’s music to Michigan basketball coach John Beilein’s ears, as Poole verbally committed to be a Wolverine during a press conference at his school Friday. Interestingly enough, Poole is only a junior.

He’s the first Michigan commitment for 2017.

Hence, that whole not waiting around mentality.

“I didn’t want the opportunity to slip past, because if there was somebody else who liked (Michigan) as much as I did and was in the same position and they committed, I would be out of luck,” Poole told The News. “I would miss out on a great opportunity.

“I just felt everything was right.”

Poole, 16, made two visits to Michigan — one for the BYU-Michigan football game in September, and the other for the Michigan State-Michigan game earlier this month.

That game, of course, was a thriller.

He still enjoyed the experience, though, and truth be told, he already had decided on Michigan the previous week. Nothing that happened Saturday was going to change that.

Poole, a 6-foot-4, 180-pound guard, had offers from about a dozen schools, including his home-state power, Wisconsin.

Still, Michigan always was atop the list, for several reasons. One, the education. Two, Beilein.

If you’re a shooter, you want to play for Beilein, one of the top offensive minds in the nation.

“Yeah! If you have a coach who is just like, ‘If you’re open, shoot it,’ why not?” Poole said. “If the coach is telling me to shoot, he does not have to tell me twice.

“That’s what really caught my attention as a player.”

Poole first met Beilein during an open gym this summer, and it didn’t take long to get enamored with Michigan. Ann Arbor is relatively close to him, and reminds him of Milwaukee.

Poole said there still are things he needs to work on, starting with his body. It needs more muscle before he arrives on campus. His defense, too, is a work in progress.

But he’s only 16. That’ll happen — knowing Poole, probably sooner rather than later.

“He has things mapped out already,” Gosz said of Poole, who averaged 16 points as a sophomore. “Michigan’s gonna get a kid that they’re not gonna be disappointed with, by any of his attributes.”