Gophers will fight for extended stay with Little Brown Jug

It has spent the past year at Minnesota, after the Gophers beat the Wolverines 30-14 in Michigan Stadium last fall.

Gophers will fight for extended stay with Little Brown Jug 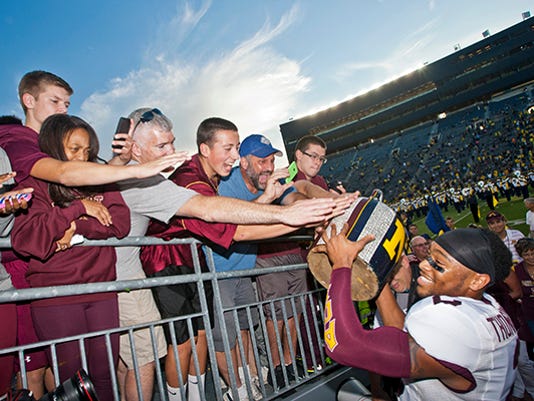 The Little Brown Jug is a very old, not particularly attractive, earthenware jug, and yet people have made appointments to take selfies with it and book the Jug for various events during its current stay in Minneapolis.

This is the life of the nation's oldest trophy, awarded to the winner of the Michigan-Minnesota game. It has spent the past year at Minnesota, after the Gophers beat the Wolverines 30-14 in Michigan Stadium last fall.

Michigan plays at Minnesota on Saturday night, and the Gophers will attempt to keep the trophy for consecutive years – actually, the winner will have the Jug until 2017, when the teams are scheduled to meet again – for the first time since the Gophers won a four-game stretch from 1960-63. Otherwise, every time the Gophers have won it, Michigan has won it back the following opportunity.

"Once you personally get your hands on the Little Brown Jug, and you have it around, it's one of the best traditions of college football," Minnesota associate head coach / defensive coordinator Tracy Claeys said Tuesday on the Big Ten conference call. He filled in for head coach Jerry Kill, who had a previous appointment.

"I know our fans, the kids, everybody associated with the university in the state were excited that we got to have it back in Minnesota for a year. Because of that, I think our kids have seen how important it is. We'll fight awfully hard and do our best to keep it right here in the state of Minnesota. But it will definitely be a challenge."

Claeys said the Jug currently is in the Gophers' football offices, where it is kept on display.

"I don't know how many requests we've had through the year, it's got to be 100, to have it at different events and people want their picture taken with it," he said. "It's one of the neat things of college football. Of the trophy games, it's probably the one we've had the least amount of times at the University of Minnesota. It had a little bit higher of importance and it was a lot of fun to bring it back to the state of Minnesota. We've got to make sure we work hard to keep it here."