Wolverines wide receiver is not one to scan his own stats. 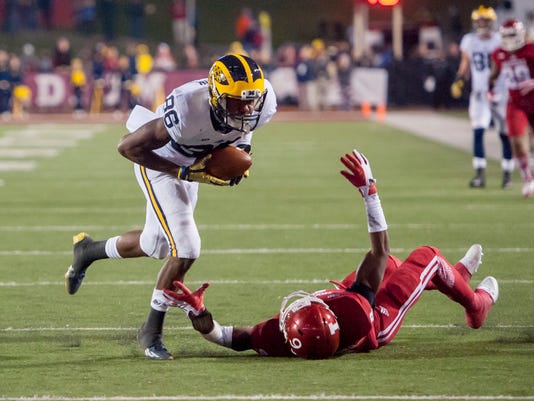 Ann Arbor — Michigan receiver Jehu Chesson is not what one might call a "stats guy."

He is a bottom-line guy.

And that means he's only interested in winning games.

Chesson was the Big Ten's co-Offensive Player of the Week, which was announced Monday, sharing the honor with Michigan quarterback Jake Rudock. Rudock threw a program-record six touchdowns in a double-overtime victory at Indiana last Saturday, and Chesson had four of them, matching a school record.

He caught a 5-yard touchdown with 2 seconds remaining in regulation to force overtime, and earlier in the game Chesson and Rudock connected on a 64-yard pass for a score.

"My biggest thing in terms of stats is just win," Chesson said Monday at Michigan's weekly news conference. "I don't care how we do it, I don't care if I play or don't play. I just want to win."

Glasgow: Rudock not one of UM's 'Mean Girls'

"When you block, it take shots off the quarterback and running backs," he said.

Chesson, who had 207 yards receiving against Indiana, leads the team with seven touchdown receptions, all coming in the last three games. He also has a kickoff return for a touchdown this season.

He is the fastest player on the team, having won a number of sprints held by coach Jim Harbaugh during spring practice. He won every race, edging defensive backs Jourdan Lewis, Jabrill Peppers, Reon Dawson, and Jeremy Clark. But Chesson has no idea what his times were.

"(Harbaugh) wanted to know who was fastest," Chesson said. "Never knew our times, never cared to ask. It was always close, but, no, I did not lose."

See, he's a bottom-line guy. It's about all about winning, and in this case, a foot race.

The 6-foot-3, 200-pound Chesson has been praised all season for his work as a blocker and his special teams work.

After the Indiana victory, Harbaugh said Chesson had become more of a complete player. The deep-ball catch had been missing from his repertoire, although the opportunities had been there all season.

The 64-yard touchdown reception nudged him even more to becoming that type of player Harbaugh said can be successful at the next level.

"I told Jehu this week during practice, he's got everything it takes to be a great player, someday a great pro player," Harbaugh said after the game. "The only think he was missing was tracking the deep ball, making the deep-ball catches. And, boom, he does it."

Harbaugh, who a few weeks ago called Chesson "one of the premier blockers in the country as a wide receiver, said Monday that Chesson has made improvement in all phases of his came.

Chesson credits Harbaugh and staff for where he is now as a player.

Wolverines not hurting, 'have a bounce in their step'

"I'd say I've been improving," he said. "I'm just happy to have the opportunity to play for coach Harbaugh and the offense that I'm in right now. I feel like I'm improving week in and week out, which is good. I've always been working hard, I don't think I've been working harder, just a different way of channeling my energy, what can I do better, what different drills can I do."

The offense, he said, suits him because Harbaugh puts more responsibility on the receivers and there's a high level of trust. That trust equates to confidence, and that, Chesson said, makes it easier to perform.

"(It's) not just with football but just in school, how you're organized, how you approach every day life," Chesson said. "There's a quote in his book, 'There's no reason for failure when success is offered every day.' You take those nuances and try to build upon them and put them in effect. You put your goals down, knock them off, and you build confidence."