Michigan was heavily penalized and needed critical red-zone defense and special teams plays to win on the road again.

Michigan head coach Jim Harbaugh is upset after a penalty against the Wolverines in the first quarter. David Guralnick / Detroit News
Fullscreen

Penn State quarterback Christian Hackenberg has his neck checked out after being tackled in the third quarter. David Guralnick / Detroit News
Fullscreen Michigan cornerback Jourdan Lewis works his way around the Penn State defenders on his way to a 55-yard kick return in the fourth quarter. David Guralnick / Detroit News
Fullscreen

Michigan running back De'Veon Smith dives over the top of the pile of players to score a touchdown in the fourth quarter. David Guralnick / Detroit News
Fullscreen

4. Michigan (9-2, 6-1) – The Wolverines took care of business on the road against Penn State and now turn their attention to Ohio State. Michigan still has a shot at winning the East if it can beat OSU, but it will need Michigan State to lose to Penn State. That, however, won’t diminish the emotion with the Buckeyes coming to town. Last week: 4. David Guralnick / Detroit News
Fullscreen

Michigan head coach Jim Harbaugh is all smiles after running back De'Veon Smith ran the ball for a touchdown in the fourth quarter, effectively putting the game out of reach. David Guralnick / Detroit News
Fullscreen

Michigan's Jake Butt has taken the jokes about his name -- that have now gone nationally with his Big Ten Tight End of the Year honor -- with a sense of humor. David Guralnick / Detroit News
Fullscreen 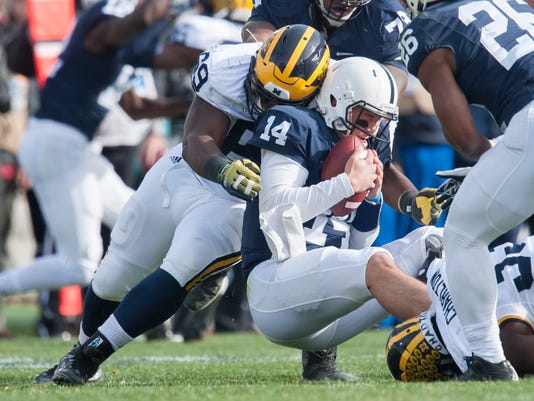 State College, Pa. – Michigan relied on its red-zone defense, strong pass protection from its offensive line and a kickoff return from Jourdan Lewis to win on the road again.

The Wolverines defeated Penn State, 28-16, on Saturday to remain perfect this season in Big Ten road games. But the Michigan fans among the 107,418 at Beaver Stadium moved on quickly and began the “Beat Ohio” chant as the final seconds ticked off the clock.

Regardless, rebounding from a 5-7 season a year ago to this kind of success under coach Jim Harbaugh has been meaningful to the players.

“It’s really special,” said tight end Jake Butt, who had a touchdown reception and now has 1,012 receiving yards, fifth among Michigan tight ends all-time. “It’s been our goal since the beginning of the year to try to become Big Ten champions.

Red-zone defense has been a hallmark of Michigan this fall, and this game was no different.

It was quite a rebound from a week earlier at Indiana when the defense, playing without nose tackle Ryan Glasgow, out for the season with injury, for the first time. Indiana gained 307 yards rushing.

“It’s been so good in the red zone, forcing again three field goals,” Harbaugh said. “It’s been remarkable the way our defense has played. In that facet I can’t imagine anybody is playing any better; maybe someone is playing as good in terms of red-zone football. It’s a real strength for us.”

In 25 trips to the red zone, Michigan opponents have scored 21 times, including 13 field goals.

Michigan quarterback Jake Rudock was 25-of-38 for 256 yards and touchdowns to Amara Darboh and Butt. He also had an interception and a fumble. Rudock is the first Michigan quarterback to throw for 250 yards or more in three straight games. He threw for 337 against Rutgers and 440 at Indiana.

Rudock orchestrated four touchdown drives, but perhaps his best was a 70-yard, seven-play drive just before halftime that included a 26-yard third-down completion to Darboh. Butt caught an 18-yard pass for a first down at the Penn State 11, and Darboh caught the 11-yard touchdown to regain the lead, 14-10 with 51 seconds left.

Rudock took two sacks from a Penn State defense that had been averaging a national-high of 4.2 a game. Carl Nassib, the Nittany Lions' sack leader, did not play because of injury. Meanwhile, Penn State quarterback Christian Hackenberg was sacked four times, including two by Taco Charlton.

The Wolverines, who were penalized 13 times for 117 yards, had an enormous boost from special teams in the second half.

After Penn State pulled within 21-16 with just more than eight minutes left in the game, Michigan’s Jourdan Lewis responded with a 55-yard kickoff return, giving the Wolverines the ball at the Penn State 40.

“That was a great play,” Harbaugh said of the return. “Jourdan was in the huddle and he looked over me and said, ‘I’m going to break their back right here,’ and I said, ‘Go ahead, have at it.’ It was a phenomenal return. He was competing like a maniac throughout that return, just refusing to go down.”

Michigan then drove 40 yards on five plays with De’Veon Smith scoring on a 1-yard run for a 28-16 cushion.

Late in the third quarter, receiver Jehu Chesson recovered a fumbled punt by DeAndre Thompkins, giving the Wolverines the ball at the Penn State 9-yard line and setting up a touchdown run by Sione Houma.

Harbaugh said the focus among his players has been intense as they prepare for their regular-season finale.

“A good five, six weeks we’ve been playing with this playoff mentality,” Harbaugh said. “It’s a lot of fun to be in this environment and this position. It’s fun to be in the playoffs. We’ve been in it for weeks in our minds and in our preparation. We’re just having at it.”