Early in the season, Michigan fans were a tad uneasy about quarterback Jake Rudock. Not anymore. 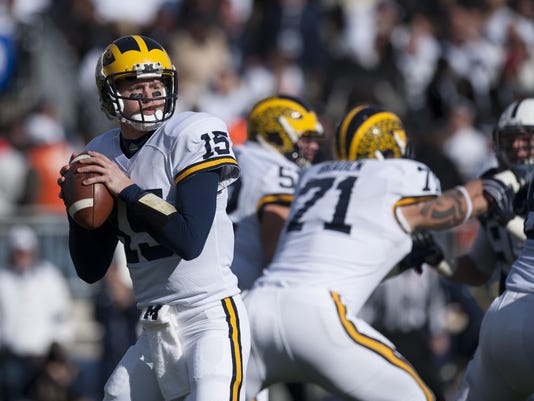 Early in the season, Michigan fans were a tad uneasy about quarterback Jake Rudock.

The graduate transfer from Iowa has guided the Wolverines to the fringes of the College Football Playoff discussion, and has clawed his way into the UM record book along the way.

“He’s been a godsend for our team,” coach Jim Harbaugh said Monday, the official start of Michigan-Ohio State week.

“He is so tough. This past game (against Penn State), the toughness was on display. I know I’ve said it. Maybe saying ‘as tough as a two-dollar steak’ doesn’t even give it real justice. This guy is tough as nails.”

Rudock has Michigan 9-2 and ranked No. 12 in the nation heading into the regular-season finale Saturday in Ann Arbor.

Rudock has a chance to climb into the top five in single-season passing yards in Michigan history. The guy currently No. 5 in the record books: Harbaugh.

“I feel good about it,” Harbaugh said of the prospects of Rudock passing his mark. “I didn’t know I had any (records) left. It’s such a long time ago.

“He’s left some marks on the record book, without a doubt. And that is fantastic. He is playing at a very high level.”

Among Rudock’s notable statistics, he is seventh in Michigan history with 210 completions.

For a single game, he set the record with six touchdown passes against Indiana. Also against Indiana, he had 33 completions (second all-time) and 440 yards (third).

Rudock’s 64.4-percent completion percentage is tops all-time for a career, and is just behind Todd Collins’ for the single-season record.

That Utah game seems so long ago, doesn’t it?

Now there’s starting to be at least some chatter about Rudock’s prospects in the NFL, though Harbaugh said he hasn’t had any discussions with NFL scouts about it, other than to say, “I would think he would be” on some teams’ draft boards.

Harbaugh circled back to Rudock’s toughness, a big reason Michigan has bounced back from the Michigan State loss to win four straight — including nailbiters against Minnesota, Indiana and Penn State, all on the road.

“He’s got a competitive fire, he’s been in a lot of competitive situations,” Harbaugh said of Rudock, Iowa’s starter for two years. “(Toughness) is a talent. I always look at toughness as a talent that’s trained, it’s not just granted upon somebody.

“And he’s been trained well.”