Michigan up for beating archrival, reviving its legacy

As Michigan prepares to face archrival Ohio State for the 112th time, it’s on the cusp of a 10-win regular season.

Michigan up for beating archrival, reviving its legacy 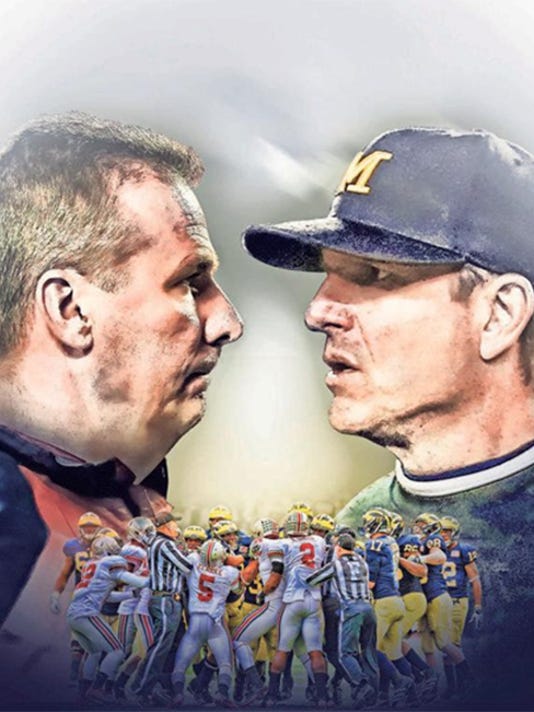 Urban Meyer and Jim Harbaugh are now in charge of one of the nation's most captivating rivalries.(Photo: Photo illustration by James Hollar, Detroit News)

Ann Arbor — The Michigan players left the Ohio Stadium field last fall, a third straight loss to the Buckeyes, a five-win season that ensured there would be no bowl game, and they knew the job security of their coach was in serious trouble.

Fast forward a year, and the atmosphere in the Michigan program is vastly different. Coach Jim Harbaugh, who spent the last four years coaching the San Francisco 49ers, has breathed new life into his alma mater’s football program, while instilling the players with a confidence that hadn’t been evidenced in a long while.

As the Wolverines prepare to face archrival Ohio State at Michigan Stadium in the 112th game in this series, they sit on the cusp of a 10-win regular season, something they haven’t sniffed since 2011. Michigan, which began the season unranked, is No. 12 and 9-2 overall, 6-1 Big Ten, including a 4-0 record in conference road games. No. 8 Ohio State, which has won 10 of the last 11 games in the rivalry, is 10-1, 6-1, having lost to Michigan State last Saturday.

The winner of this game could advance to the Big Ten championship game as the East Division representative if Michigan State were to lose to Penn State later on Saturday.

While many college football observers might be surprised how Harbaugh turned around the program from a five-win team a year ago to a nine-win team with one regular-season game left, the players said they knew early on the improvements would be apparent.

“Before the season even started, a lot of people had their thoughts on how we’d finish and how we’d play and everything,” said linebacker and co-captain Joe Bolden, who will be among the 44 fourth- and fifth-year seniors who will be honored before the game. “But I think the guys knew we could be one heck of a football team, and I think we’re proving it each week as we go out and play the way a nine-, 10-win football team does. I think that speaks volumes for the guys and especially the coaching staff.”

Beating Ohio State would not only snap a three-game losing streak in the series, which the Buckeyes have dominated, winning 11 of the last 13, but it would give more credibility to a program that has desperately wanted to right the ship since 2008 when things began to slip. Harbaugh is the program’s third coach since that season.

“Really turning Michigan football around with coach Harbaugh and being part of something this special, it would be a heck of a way to cap the season off and really get rolling into bowl season,” Bolden said.

Way back in spring practice, Bolden was one of the players who said he was stunned when he saw the practice itinerary that featured four-hour practices. Harbaugh called them class on grass and decided to do away with classroom football work and do all of the teaching on the field.

Offensive guard Kyle Kalis said he’s not at all shocked Michigan is on the verge of potentially doubling its total of victories from a year ago.

“The first step we saw was in spring ball,” Kalis said. “That was just 15 practices. After that, the guys all came together and we’re like, we have a chance to be something special. It’s come to fruition. It’s been a great season and hope to end it on a good note.”

The players spoke this week about the importance of playing Ohio State, but they followed the lead of their coach, who did not amplify this week of preparation over any of the others.

“The biggest game is the next game,” Jabrill Peppers said after Tuesday’s practice.

But this next game carries so much, a win for Harbaugh in his first game coaching in a rivalry in which he guaranteed victory as a quarterback in 1986 and followed through, and then that 10-win mark that places teams in a top tier.

“We just take it one game at a time,” Peppers said. “We take care of what we have to take care of, everything will take care of itself. That’s how we look at it. There’s no pressure when you’re prepared. We’re prepared for this. We’ve been through adversity, we know how to face adversity.

“We want to send these guys off right and put an exclamation mark on the season. Anything could happen, but we’re controlling the controllables. Let the pieces fall where they may.”

A fumbled punt in the final 10 seconds of the Michigan-Michigan State game and an alert play by the Spartans gave the Wolverines their only home loss this season. Since then, they have won four straight heading into the Ohio State game.

“We used it as motivation,” tight end Jake Butt said. “We have a bad taste in our mouths and we still haven’t cleaned it all the way out yet. Like coach Harbaugh always says, somebody else has to pay so each week we’re trying to cancel out that loss with another win each week.”

Beating the Buckeyes likely would rinse that bad taste. Losing would mean another season of being swept by their rivals.

“You want to come to Michigan to win these games,” Butt said. “You don’t want to leave saying you never beat these guys. It does mean a lot to everybody on this team. We are going to go out there and lay it on the line for these seniors because they deserve it.”