Woodson: 'I do need for us to beat Ohio State'

In a wide-ranging interview, the 1997 Heisman winner talks about comparison to Jabrill Peppers, UM's Nike contract and moving The Game to primetime.

Woodson: 'I do need for us to beat Ohio State' 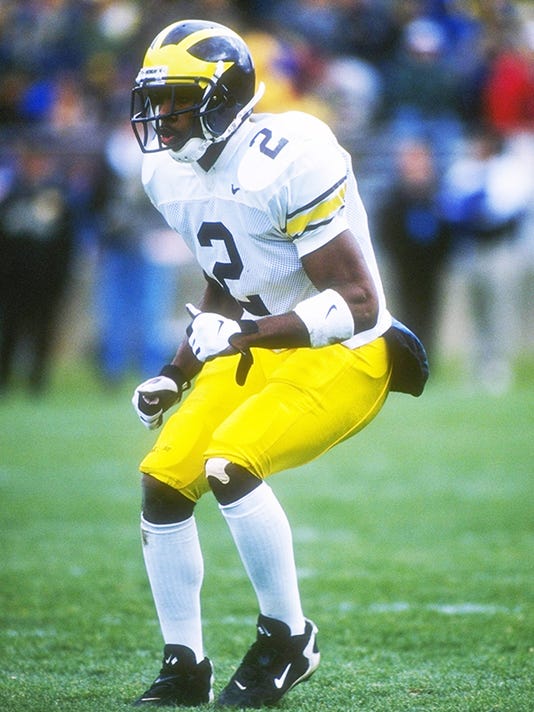 Michigan Heisman Trophy winner Charles Woodson keeps close tabs on the Wolverines even during his busy NFL season, and he has not been disappointed.

Woodson had trumpeted Jim Harbaugh as a coach who would re-energize the Michigan program and restore its luster, and on the eve of the Michigan-Ohio State game, in which Woodson distinguished himself in 1997 enroute to the Heisman Trophy and a national championship, he can't say enough about how much the team has improved.

"I think he's lived up to the expectations I've had," Woodson said in a telephone interview with The Detroit News. "I thought he'd come in and be successful. I know there were people who didn't feel we had enough talent at Michigan to be competitive and feel like he'd have to rebuild, but I felt like with him and his track record that he was going to come in and do a great job. He brought some NFL guys with him helping him coach, and I just I felt like it was going to be a successful season.

"I think it's a great year. Of course, I do need for us to beat Ohio State. We lost a heartbreaker that was won to Michigan State, but you look at the season starting off against Utah, we fought back and had a chance to win the game and had some costly errors. After that, we settled down, the quarterback has played well, and our defense came alive and started to really make a difference."

While Woodson said he regularly watches Michigan games, he pays special attention to the play of the secondary. After all, Woodson was a cornerback, who played on offense at times and on special teams and became the first primarily defensive player to win the Heisman.

"I love it, man, I love it," Woodson said. "I watch (cornerback) Jourdan Lewis and he's straight up balling out there. He's taking on the top receiver in the game and taking on that challenge. When I look at that group, they have some athletes and that competitive spirit. They're not afraid to press guys and do what they need to do to help the team. They're fun to watch.

"Jourdan, from what I understand is coming back — wow. When I'm watching him I feel like he's only going to get better whether he stays or goes and because he has the mentality to do that, anybody who has the mind and the will to do it and the work ethic can do it."

Of course, he has also paid special attention to safety Jabrill Peppers, who has been a three-way player for Michigan this last half of the season, adding offense to his repertoire after playing on defense and special teams the first half.

Many often compare Peppers to Woodson in terms of his ability to play multiple positions and potential to be a game-breaker.

"He's fun to watch. He's doing it all," Woodson said. "People ask me about similarities between us, and I always feel like they're talking about style of play. When I think that, I think, 'Do they move like a certain player?' In that respect, we're totally different, two different styles, two different body types. But wanting to contribute in any way you can, on offense, defense, special teams and having the mindset that, 'I want to win ball games, put me where you need me coach,' that's where we're similar."

"The games I've been able to watch, I'll see certain things and send him a text to let him know I'm watching them and keeping tabs," Woodson said.

Woodson is still playing in the NFL, and acknowledges it's been a long time since that 1997 championship season.

"I hear all the time how old I am," he said, laughing.

Michigan will re-retire the program's retired jerseys and officially retire the jersey of Heisman Trophy winner Desmond Howard. Howard has said Woodson's name should be at the top of the list of jerseys that should next be retired.

"Hey, man, I'm not in those conversations," Woodson said, lightheartedly. "Honestly, I feel like if the time comes, if it happens, fine. But if they feel someone should be awarded the jersey (No. 2), that's fine. I wouldn't pull one way or the other. I figure if it happens, it happens."

As much as Woodson fully endorsed Harbaugh as Michigan's next coach, he is equally supportive of the athletic department's move to Nike next season. He has a personal contract with the Nike Jordan Brand, and loves the fact Michigan is the first football team to have an association with the Jordan Brand and will wear the Jumpman logo on the football uniforms.

Woodson believes it will help recruiting.

"It's a great thing," Woodson said. "When you think about Michael Jordan you think about the greatest player to play basketball. Whether or not it's football or not it doesn't matter. We're talking about the greatest to ever do it. And if you have the opportunity to unite excellence, which is what I think Michigan is, and greatness, then that's the partnership of Michigan and Jordan."

For Woodson, the Michigan-Ohio State game will always mean everything to him. As a product of Fremont, Ohio, it took on a personal level.

But he, along with Ohio State Heisman Trophy winner Eddie George are working together to generate interest in moving the Michigan-Ohio State game to a regular starting time at 3:30 p.m. or later. The game Saturday is at noon.

The two worked on a Heisman Trophy commercial together and Woodson brought it up to George. George agreed to allow Woodson to use his name in a Facebook post to promote this option.

"This rivalry, for the history that it's always had, it deserves primetime, and 12 o'clock is not primetime," Woodson said. "We got a lot of response. Most say it's tradition or it's too cold. Ah, come on, man, we all lived in the Midwest. The cold is not an issue. And as far as tradition, it's the game, not the time. Let's start this movement."

And with that, Woodson laughed and said he's looking forward to watching the next installment of the Michigan-Ohio State rivalry.

"I'm still invested in what happens," he said.