Michigan's defense wilted against the Buckeyes rushing attack in a 42-13 loss.

Ohio State defensive lineman Joey Bosa sacks Michigan quarterback Jake Rudock, causing him to fumble and injuring him on the play in the fourth quarter. The fumble was later reversed, but Rudock had to be helped off the field and did not return. Bosa and Rudock were high school teammates in Florida. John T. Greilick, Detroit News
Fullscreen

Ohio State defensive lineman Joey Bosa (left) and Ohio State linebacker Raekwon McMillan (5) celebrate a crushing sack by Bosa, while Michigan quarterback Jake Rudock lies on the turf, injured, in the fourth quarter. Rudock had to be helped off the field and did not return. John T. Greilick, Detroit News
Fullscreen

Ohio State cornerback Eli Apple was not called for pass interference on this fourth-quarter play in the red zone and Michigan had to settle for a field goal. John T. Greilick, Detroit News
Fullscreen 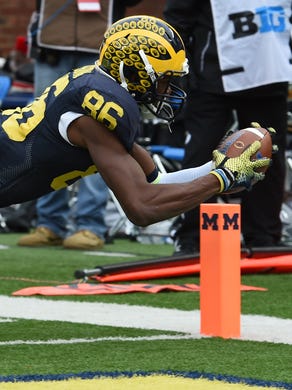 Michigan wide receiver Jehu Chesson dives for the pylon and a second-quarter touchdown to cut the Buckeyes' lead to 14-10 after the extra point. John T. Greilick, Detroit News
Fullscreen

Michigan running back De'Veon Smith rushes for a first down on the Wolverines' scoring drive late in the second quarter. John T. Greilick, Detroit News
Fullscreen

Michigan head coach Jim Harbaugh was upset after his team failed to keep a punt from going into the end zone in the first quarter. David Guralnick / Detroit News
Fullscreen

Michigan wide receiver Jehu Chesson catches a pass over the middle for a first down late in the second quarter. John T. Greilick, Detroit News
Fullscreen 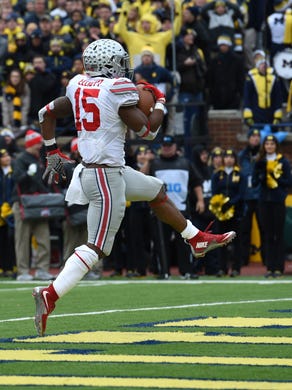 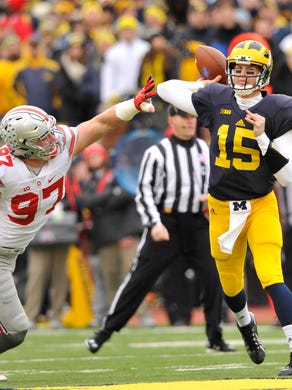 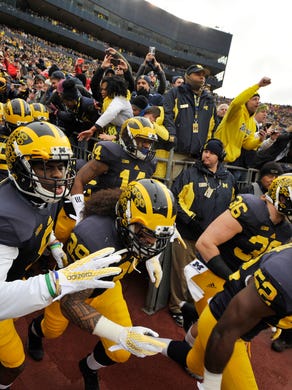 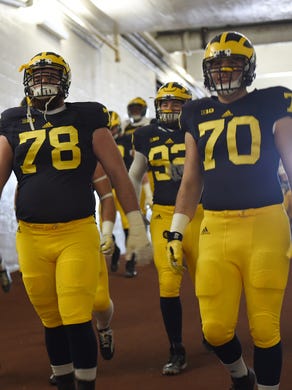 Interim Athletic Director Jim Hackett gives a toast with a group of supporters in the lobby of the Jack Roth Stadium Club before the Wolverines' game against Ohio State. David Guralnick / Detroit News
Fullscreen 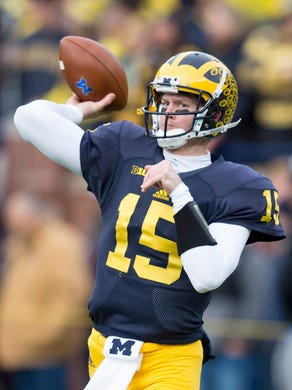 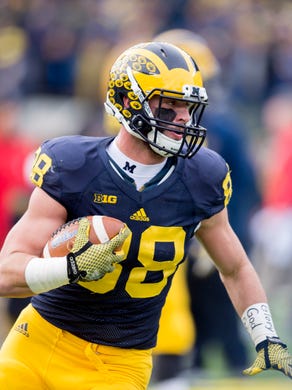 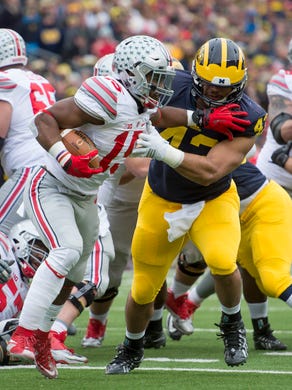 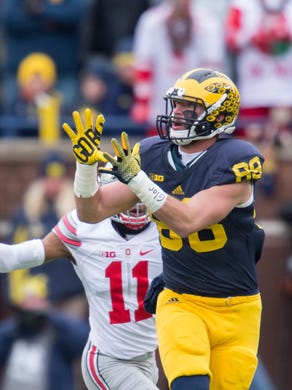 Ohio State linebacker Raekwon McMillan is helped off the field near the end of the first half. David Guralnick / Detroit News
Fullscreen 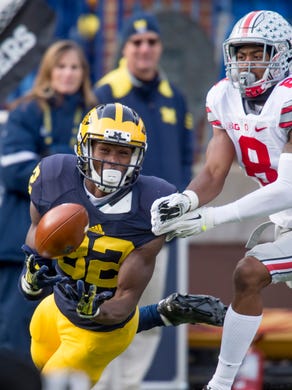 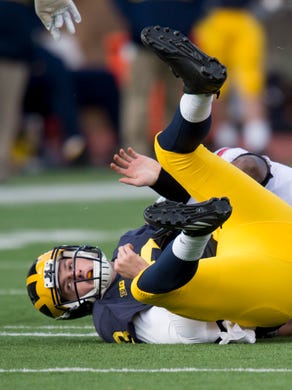 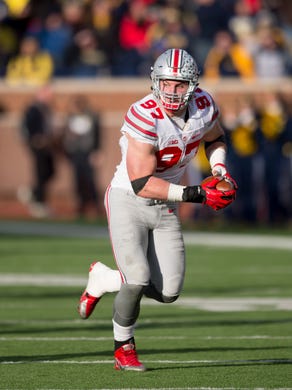 Michigan fans look dejected as the Buckeyes outscored the Wolverines 28-3 in the second half. John T. Greilick, Detroit News
Fullscreen 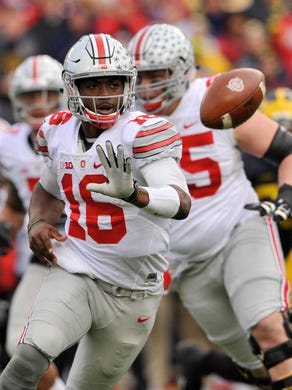 Ohio State running back Ezekiel Elliott and a pair of Buckeyes superfans celebrate his second touchdown of the game, this one in the fourth quarter. John T. Greilick, Detroit News
Fullscreen 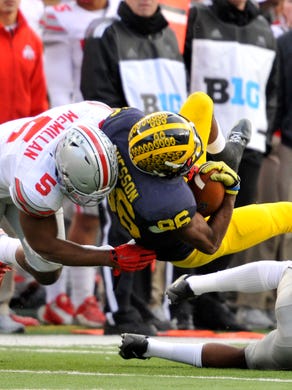 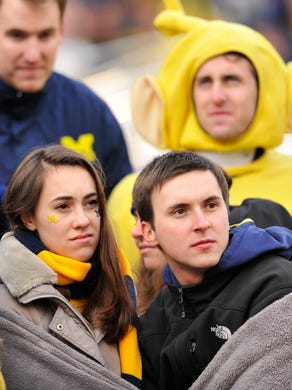 Michigan fans look on dejectedly late in the fourth quarter of a blow out loss to the Ohio State Buckeyes, who outscored the Wolverines 28-3 in the second half. John T. Greilick, Detroit News
Fullscreen 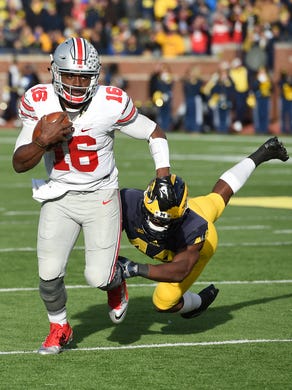 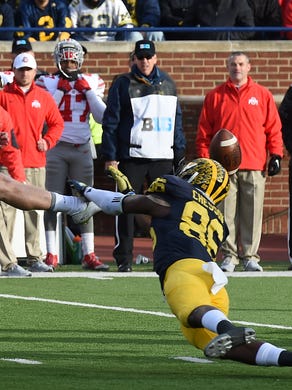 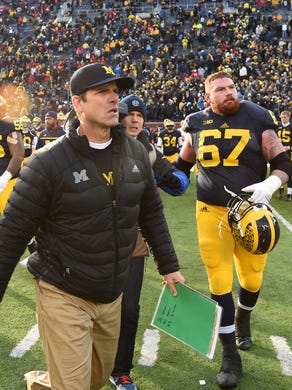 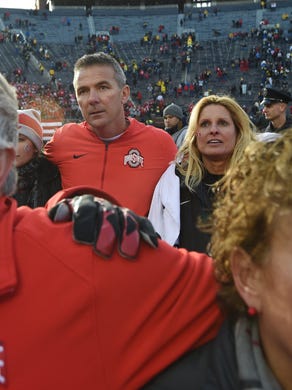 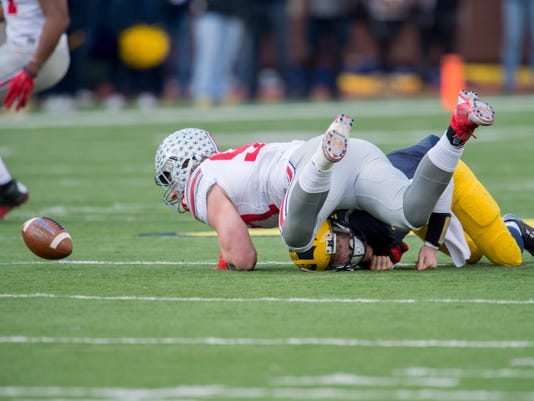 Ann Arbor — Ohio State asserted itself yet again, running roughshod over Michigan in Jim Harbaugh’s first game coaching his alma mater in the 112th version of this rivalry.

Michigan’s defense, which showed signs a few weeks ago of being susceptible against an up-tempo offense and strong running attack, wilted against the Buckeyes rushing attack in a 42-13  loss before 111,829 at Michigan Stadium on Saturday.

Ohio State's 29-point win was its largest against Michigan in Ann Arbor since 1961.

The Wolverines, who finish the regular season 9-3, 6-2 Big Ten, could not get their running game going and were held to 57 yards, including five in the second half, in part a function of having to play deep with a large deficit.

Ohio State (11-1, 7-1) continues its dominance over Michigan. The Buckeyes have won four straight, all under coach Urban Meyer, and is 12-1 in the last 13 meetings with Michigan.

OSU tailback Ezekiel Elliott, who criticized the play-calling in the Buckeyes’ loss to MSU a week earlier, rushed for 214 yards — including a 66-yard run — and two touchdowns. Quarterback J.T. Barrett rushed 19 times for 139 yards and three touchdowns. He had more carries than completions. He was 9-of-15 for 113 yards and had a  25-yard touchdown pass to Jalin Marshall for the opening score of the third quarter.

“They’re very good,” Harbaugh said. “They got after us, running the football. The No. 1 thing is we weren’t tackling well enough.”

By the fourth quarter, Michigan’s defense, which looked tired while being gashed for 369 rushing yards, the most the Wolverines have allowed this season, also had moments of confusion, even being penalized for 12-men on the field and then appearing scattered again on the next play. OSU entered the game leading the Big Ten in rushing, averaging 230.4 yards.

“There were a couple times where I was kind of gassed, especially when they were driving the ball for those 10- or 15-play drives they had," Michigan defensive lineman Chris Wormley said. "It’s the Ohio State-Michigan game, you’re going to be out there and do whatever the coach says and lay it on the line.”

Wormley explained that Barrett brought a different layer to the Ohio State attack.

Michigan starting quarterback Jake Rudock, a graduate transfer from Iowa where he started the last two seasons, was knocked out of the game in the fourth quarter after a hard hit by his former high school teammate, Joey Bosa. Rudock, who was 19-of-32 for 263 yards and a touchdown, did not return to the game.

“I don’t know how serious it is but an AC to the left shoulder,” Harbaugh said, offering no further details.

The Wolverines were less productive in their run game the second half of the season, and Saturday’s game was no different. In fact, against both of Michigan's key rivals, OSU and Michigan State, its running game was ineffective at home. Michigan had 62 yards rushing against MSU, before its 57 against Ohio State. In its opening loss at Utah, it had 76 rushing yards.

Three-way player Jabrill Peppers led the team with 29 yards rushing on seven carries, while lead back De’Veon Smith had 23 yards on 10 carries.

Michigan’s lone touchdown came on a 5-yard pass from Rudock to Jehu Chesson with a minute left in the first half, pulling the Wolverines within 14-10 and giving them some momentum into the locker room at halftime.

It didn’t carry into the second half, as the Wolverines were held to a fourth-quarter field goal.

Ohio State scored late in the first half after it appeared the Wolverines’ defense had held the Buckeyes to three yards and a three-and-out. But on the punt, Tyree Kinnel was called for roughing the punter, giving Ohio State a first down at its 24-yard line.

The Buckeyes did plenty with renewed life and the 66-yard run by Elliott to the Michigan 10 set up the first score of the game. Barrett ran seven yards for the touchdown with a minute left in the quarter, culminating a 94-yard, seven-play drive.

Harbaugh was a man of few words after losing to the Buckeyes, but he looked forward.

“We got beat,” Harbaugh said. “Didn’t play well enough in the game to win it. We’ll regroup and come back with the same drive and aspirations that we’ve had, win the next game.”