As per family tradition, the Michigan football coach took in 'The Force Awakens' with sons Jay and James 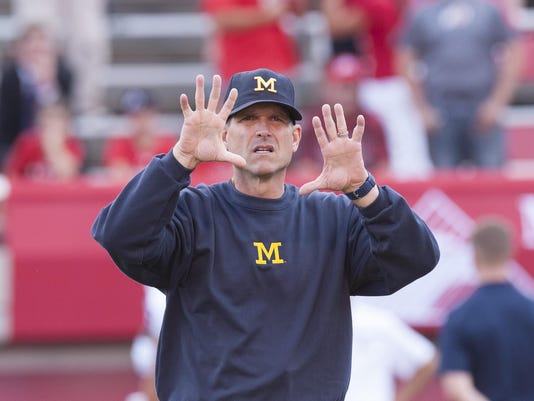 Michigan coach Jim Harbaugh is a fan of Star Wars and continued a family tradition of seeing the movie with sons, Jay and James, last week for the midnight opening of "The Force Awakens".

Harbaugh gave the latest Star Wars a thumbs up.

"(Without) Darth Vader, not quite the same." Harbaugh said. "He had a good run. It was really good."

Harbaugh managed to fit in his Star Wars viewing while working and preparing the Wolverines for the their upcoming Citrus Bowl game against Florida.

He formally announced on Monday the hiring of Don Brown as Michigan's new defensive coordinator, replacing D.J. Durkin who is now the Maryland head coach. Brown has been defensive coordinator at Boston College the last three season and the Eagles were the nation's top-rated defense this fall.

"Don Brown was our favorite coach, first coach," Harbaugh said, adding he consulted several coaches, including his father, Jack, and brother John, head coach of the Baltimore Ravens, about Brown. "I always had this vision that if we lose a coach -- and we lost D.J. Durkin to a head coaching position at Maryland, very excited for him -- the goal is to find a better coach. We have a tremendous opportunity in Don Brown of accomplishing that goal, no disrespect to coach Durkin, because he's a fabulous coach, but hey, that's the goal."

Harbaugh was asked how hard a sell it was to Brown.

"You'd like to think everybody wants to be a Wolverine," he said. "At least we do. Fortunately, Don Brown did, too."

Tight end Jake Butt and cornerback Jourdan Lewis are All-Americans, and Harbaugh said he wanted them to get their photographs taken wearing the Block M sweater so they could be hung on the wall at Schembechler Hall. But those pictures no longer hang on the wall.

"We're going to get those pictures back on the wall," Harbaugh said