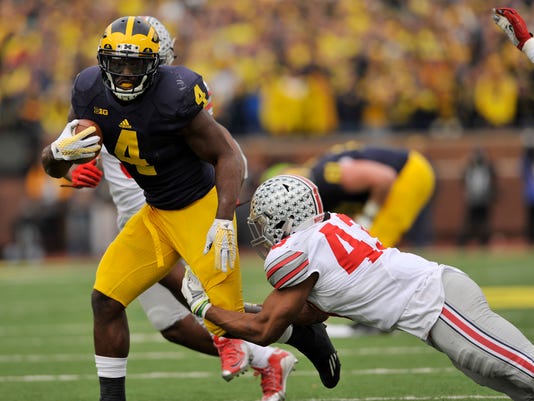 And it’s no secret the Wolverines have been more than aware and focused on reestablishing the run during Citrus Bowl preparations.

“We’ve come together, we’ve talked about, we’ve addressed it, especially the running backs, fullbacks coming together in the meeting rooms,” senior fullback Joe Kerridge said. “It’s definitely something we have to improve on. We weren’t doing what we needed to get done. We’re really striving to make a difference this coming game.”

Michigan finished the regular season 92nd nationally in rushing at 152.7 yards — and that includes four games of 200-plus yards.

“These guys have done a good job being resilient (and) keep working. They understand what we need to fix. It’s not just all on them, it’s on the coaches too.”

Florida, today’s opponent, earned a spot in the Southeastern Conference title game in large part because of its defense. Against the run, the Gators are No. 17 nationally, allowing 120.6 yards. Florida held five opponents under 70 yards, but gave up 200-plus yards to Tennessee (254), LSU (221) and Alabama (233).

Starting tailback De’Veon Smith said he faults himself for missing holes at times, and the linemen have said they need to continue to improve communication.

“Our offensive line had gotten progressively better over the season although the run yardage didn’t exactly reflect that,” Glasgow said. “We did a pretty good job of protecting Jake (Rudock, quarterback) and I thought there were a lot of positives and steps forward taken.”

Like Jim Harbaugh at Michigan, Florida coach Jim McElwain was a quarterback in college — at Eastern Washington.

He was asked about comparing the two, considering both were quarterbacks and both are in their first seasons with their respective schools.

“I think calling me a quarterback in the same category as Jim Harbaugh, I mean the guy played in the NFL, I didn’t,” McElwain said. “I was really excited to run through the tunnel at Woodward Stadium in Cheney.”

“I’m well aware of what he’s done and what he’s accomplished and, obviously, at both levels of football. And I think the one similarity, both of us growing up sons of coaches, grew up with it, grew up in it. It’s a passion to be able to coach and affect young men’s lives in a positive way.”

... Harbaugh, on being in Florida this week with temperatures in the mid-80s every day: “Got some real good sweat, some real good work here. The football gods have provided us heat and sun to shape the body and carve the mind.”