Michigan's learned to win through adversity. It did it again Saturday, holding off a pesky Penn State team.

Michigan forward Ricky Doyle (32) gets tangled up with Penn State forward Brandon Taylor (10) as they battle for a rebound during the second half Saturday, Jan. 30, 2016, in New York. Michigan won 79-72. Julie Jacobson, AP
Fullscreen

Penn State guard Shep Garner (33) bobbles the ball as he goes up to shoot against Michigan forward Ricky Doyle (32) during the first half. Julie Jacobson, AP
Fullscreen 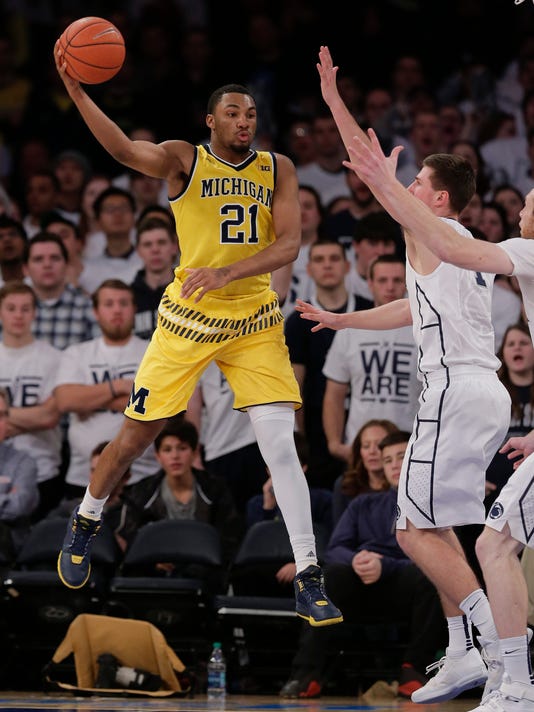 But, in the end, Michigan did exactly what it needed to during this four-game stretch against Minnesota, Nebraska, Rutgers and Penn State.

The Wolverines won them all, capped by a 79-72 win over the Nittany Lions on Saturday before a surprisingly raucous and pretty-evenly split crowd of 12,108 at Madison Square Garden.

That puts Michigan at 17-5, 7-2 in the Big Ten entering an incredibly tough week, even if both games, Tuesday against No. 19 Indiana and Saturday against No. 12 Michigan State, are being played at Crisler Center.

"I said it time and time again, this group of guys is really resilient," Derrick Walton Jr. said. "Game after game, we've made runs and withstood runs, never got too high or too low.

"Tonight was another great example."

All four of the wins in the four-game stretch saw Michigan's lead in the single digits with four minutes to go, but down the stretch, the Wolverines did what it took to win -- namely, make big shots, and those free throws.

Michigan was 16-of-20 on free throws in the second half, helping turn back an effort by Penn State (11-11, 2-7) that saw the Nittany Lions get to within five points with 4:48 to go in the ballgame.

Penn State, which Michigan routed at home Jan. 2, was much more gritty this time, thanks to a great game -- or great second half -- from the hobbling and struggling Shep Garner.

Garner scored 13 points in a two-and-a-half-minute stretch, including three 3-pointers, to get Penn State to within 64-56, and Deividas Zemgulis followed with a 3 to cut Michigan's lead to 64-59.

At that point, Michigan hadn't made a field goal in more than five minutes, until Duncan Robinson, his outside shooting have gone ice cold, took it to the basket for a tough layup.

Michigan then scored again quickly, when Walton fired a spot-on pass into the fast-breaking Muhammad-Ali Abdur-Rahkman for the layup, the Wolverines started to inch away.

"Coach always talks about running the floor, so I wanted to get down the floor as fast as I could," said Abdur-Rahkman, who finished with 15 points. "That was a big basket, so momentum shifted back in our favor."

Penn State's Payton Banks, battling a back injury, made a 3 with 38 seconds to go, but Michigan, as it has been so often, especially late, was money on its free throws. Walton was 6-for-6, and Robinson was 4-for-4.

Abdur-Rahkman, challenged recently by coach John Beilein to be a bit more aggressive, was on this day, helping lead the Wolverines charge into the paint. Michigan couldn't buy a 3, so it changed its game plan, and finished with 34 points in the paint to go with 23 points from the free-throw line.

"The Ali shuffle," Beilein said, smiling. "He pivots three or four times, then he ends up finding something.

Zak Irvin's shot was on from the get-go as he finished with 20 points on 7-for-12 shooting, and Walton scored 13, including a huge step-back 3-pointer in the second half.

That, amazingly, was Michigan's only 3-pointer of the second half, as it finished 6-for-20.

That's the fewest 3s Michigan has made since it also made six against Northern Michigan in the opener, back when Irvin, after back surgery, wasn't yet playing, and Robinson, the transfer, wasn't yet starting.

Robinson made just one 3, his fewest since he went 0-for-1 in the opener. He played just eight first-half minutes, after picking up a second foul, but made a huge play upon his re-entry with five seconds to go in the first half.

The plan was for him to find a shot, but he couldn't, but he found Irvin on the perimeter, and Irvin drained the 3 at the buzzer to make it 38-26.

"That was a big shot in this game," Beilein said.

Aubrey Dawkins picked up Robinson's slack in the first half, the sixth man adding another spark with a couple 3-pointers. And Ricky Doyle, regaining Beilein's trust, had some quality minutes, too.

Walton added 10 rebounds, and Mark Donnal scored 10 and grabbed six rebounds, including some tough ones in the second half -- on one he drew a foul and brought the bench to its feet.

Once again, Michigan found a way to win a close game without Caris LeVert, who was out for his eighth straight game with a lower-left leg injury, but is likely to return next week.

"I'm just proud of how hard we were able to fight," said Irvin, who was pumped up, letting out some big yells -- especially after a couple and-ones.

"We were just able to adjust and win a different way."

For Penn State, it was much of the same old story -- fall behind early, rally late, but run out of gas.

It has lost three in a row.

Garner, limited to six points in the first meeting against Michigan, scored 22, despite being a game-time decision with an ankle injury.

But Michigan, as it has done so often during this four-game stretch, took the punches, and stayed on its feet.

Now, the going gets tough, at the halfway point of Big Ten play.

In the second half, it plays five ranked opponents, plus games on the road against Ohio State and Wisconsin.

Tough sledding, ahead, in other words.