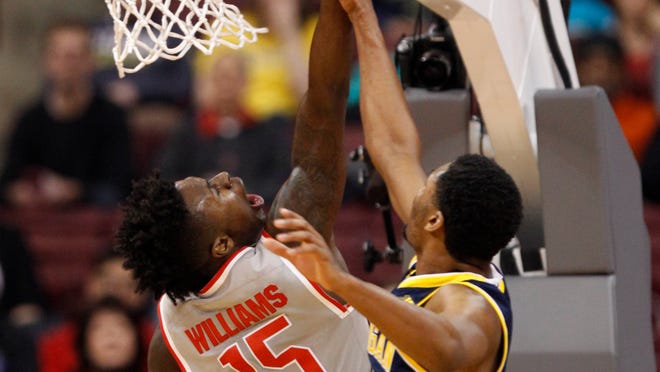 Columbus, Ohio — On Monday, Caris LeVert said he hadn’t had a setback in his recovery from a lower left leg injury.

He was, however, saying that before practice.

The pain returned and LeVert was unable to practice later Monday, and he was a scratch from Tuesday’s 77-66 road loss to Ohio State.

LeVert missed 11 games, then played 11 minutes in last Saturday’s upset victory over Purdue, leading many to speculate he was back for good.

“We’re not putting him out there when he’s in pain.”

Beilein was hopeful giving the players last Sunday off might be beneficial for LeVert, who acknowledged some soreness Monday.

But he dismissed the soreness as normal.

Beilein now plans to give his heavy-workload guys, especially Zak Irvin, Derrick Walton Jr. and Mark Donnal, a couple days off their feet before Sunday’s game against Maryland.

LeVert gets those, too.

“To have him stress it now would be getting in the way of Sunday’s game,” Beilein said.

Beilein, asked the effect LeVert’s absence had on the game plan against Ohio State, said, “There’s been an effect on him and Spike (Albrecht) all year long. Ohio State had an effect on our game plan.”

Beilein wouldn’t say if LeVert’s pain was in the place of his original injury, which continues to be talked of, publicly, in vague terms.

Muhammad-Ali Abdur-Rahkman picked up his second with 7 minutes 10 seconds left in the half, and that was it — even with Michigan down eight and the game threatening to get out of hand.

Beilein never saw it that way, though.

His faith was rewarded when Michigan cut it to two several times, including with about two minutes left.

Beilein did consider putting Abdur-Rahkman, one of Michigan’s elite defenders, back in at that point, but held off.

Then, Ohio State scored seven of the last nine points of the half, to extend the lead to eight at halftime.

“I don’t think that was a big difference,” Beilein said. “I’ll do it if I think the game is getting out of control.

This was the first win by Ohio State over Michigan since 2013.