O’Korn can stake his claim to Michigan quarterback job

He is on the cusp of winning the starting job as Michigan quarterback as the Wolverines ready to begin spring practice.

O’Korn can stake his claim to Michigan quarterback job 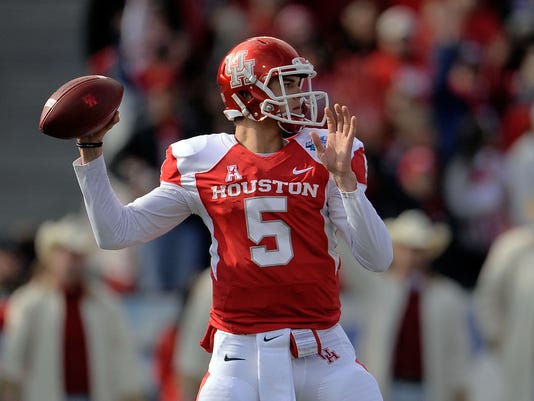 John O’Korn’s road to Ann Arbor has been one of twists with a few bumps along the way.

But now he is on the cusp of potentially winning the starting job as Michigan quarterback as the Wolverines ready to begin spring practice preparations.

They will kick off practice on Monday at the IMG Academy in Bradenton, Fla., and while coach Jim Harbaugh’s decision to take the team to Florida has become a national storyline, there are bigger issues to begin settling this spring, like who will start at quarterback, how will things shake out at linebacker, and who will take over at center.

O’Korn spent the last year at Michigan leading the scout team while having to sit out after transferring from Houston. His road here had been well-traveled, from Huntingdon, Pa., where he was raised, to highly competitive St. Aquinas High in Fort Lauderdale, where he attended his final two years while his mother spent time with her ailing parents, and then Houston, where he dazzled as a freshman, winning the American Athletic Conference’s Rookie of the Year award.

A coordinator change before his sophomore year altered his career trajectory at Houston, and O’Korn made the move to Michigan. He roomed the last year with starting quarterback Jake Rudock, a graduate transfer from Iowa who also started at St. Aquinas. And now the 6-foot-4, 220-pound O’Korn, who from all accounts excelled handling the scout team, will challenge Shane Morris and Wilton Speight, among others, for the starting job for which he appears to be the frontrunner.

“He’s been chomping at the bit, there’s no doubt,” his father, Gary O’Korn, said this week. “He had the right attitude coming in — ‘This isn’t taking a year off, this is a year to prepare.’ He’s done well and Michigan demands that. That’s not something you really have a choice, but mentally this was where you decide, ‘Am I going to go through the motions or put myself in position to get serious?’”

Ken Mastrole, a quarterback coach who has worked with Rudock and O’Korn, has described O’Korn as having “off-the-chart physical intangibles” and said he’s smart and picks up things quickly. He also has stressed living with Rudock, a very serious and studious player and the MVP of the Buffalo Wild Wings Bowl last month, has been beneficial.

“It really was a good combination,” Gary O’Korn said. “We’ve known their family, and it just was a very good fit. I asked John what he has learned from Jake over the last year, and what he told me was how Jake approaches the game. Everything he puts into it and the poise he has. I think that has been beneficial.”

No player wants to ever sit out a season, but O’Korn, who has two years of eligibility remaining, had no choice.

“He embraced it,” Paula O’Korn, his mother, said. “It was different for him. John wants to be in there because that’s all he knows, but he also embraced just having the time to learn. He’s also the little brother Jake never had. They became so strong in their friendship and with football. That was a great, great mix. You can’t make these things happen. Who would have thought Harbaugh would take Jake and John and they had their background at St. Aquinas. It was divine intervention.”

Paula and her youngest of three — they have a daughter, Kalyn, and son, Mark —moved temporarily to Florida so she could spend time with her parents. Her extended family also is in the area, so it was a chance for John to engage with his grandparents and get to know aunts and uncles.

It was at St. Aquinas, a program that has developed a number of Division I, not to mention NFL, players, where he decided he would focus strictly on one sport, football.

The move was pivotal in his development. O’Korn, as a senior, was the MVP of the state title game.

“Coming from a small town, not to say he was a big fish here because he hadn’t gotten to that point, but when you go to some national combines and you’re starting to get noticed on a national level, you start to maybe feel like the big fish in a small lake,” Gary O’Korn said. “When John found out he could go to Florida and see if he could play at that level, we made it happen.

“I stayed here in Pennsylvania so it was interesting sometimes. We got through all that and I was able to make enough trips to Florida to have it really be normal. What it meant to John was being able to play at a higher level. He had to adjust to the speed and I think that’s what his junior year was all about. Also playing against Division I talent — he had (former Ohio State standout defender) Joey Bosa in his face every day in practice. At a school like Aquinas, it’s not just the talent, it’s like-minded people who want to get to a certain level and academics were very important. The culture was right for him.”

It was right for him at Houston, too, at least for a season. 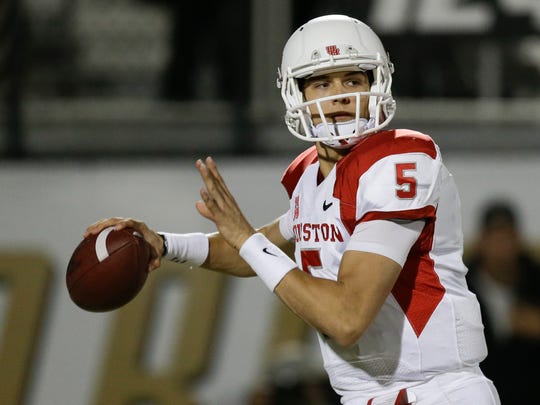 Under offensive coordinator Doug Meacham, O’Korn thrived and threw for 3,117 yards and 28 touchdowns and earned the rookie-of-the-year award. The next season, though, Meacham had moved on and O’Korn eventually lost his starting job as Houston moved to more of a spread offense.

While at Houston, O’Korn, his parents said, developed more religiously and spiritually. Ultimately, his faith helped him handle what was happening as he chose to transfer and eventually decided to attend Michigan.

“He is a great soul. We’re very proud of him,” said Paula O’Korn, who is living in Pennsylvania again and grateful that only a six-hour drive separates her from her youngest child. “All the adversity he’s dealt with and how he’s handled it all, we’ve learned from him. I’d like to take credit for who he is, but it’s his faith and the adversity he’s gotten into and the people he’s met, and seeing people go through traumatic times in their life and come out stronger and better, and he trusts that God is going to bring you through it the right way. I’ve always had faith, but John has taken me to another level. He’s pretty cool. The way he handles life is amazing. As a mother I couldn’t be more proud.”

Her son, she said, is humble and all about the small gestures.

And John O’Korn, who benefited from living with Rudock the past season, is thriving while working with Harbaugh.

“What John loves so much about Jim, he never has to guess what Jim’s thinking, because he tells you,” Paula said. “And that’s a big deal for John.”

Clearly, O’Korn has a sense of humor which has been on display on Twitter. Recently, after taking some heat from Houston fans on Twitter, he responded with a picture of Harbaugh while he was playing for the Colts cupping his ear in the “I can’t hear you” pose.