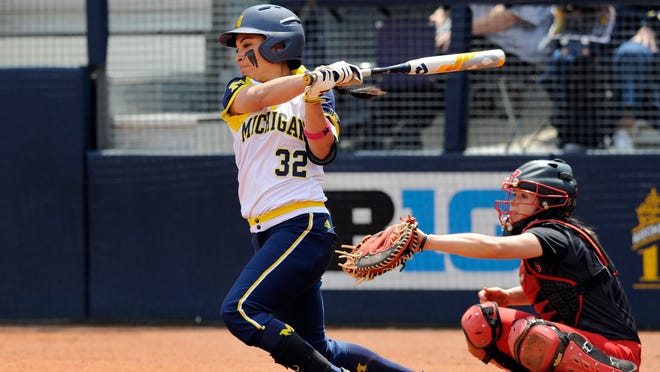 “It’s kind of like asking a parent to pick a favorite kid,” Hutchins said, laughing, after being asked if Romero is the best player she has ever coached.

But Hutchins, who has been Michigan’s coach for more than three decades, knew the moment she first saw Californian Sierra Romero, a lean, 5-foot-5, power-hitting infielder, she was something special.

Romero’s Michigan career is nearing its close as the No. 2-seeded Wolverines begin their march for a national title with an NCAA Regional game against Valparaiso on Friday night at Alumni Field. Michigan (46-5) was national champion runner-up to Florida last year, with Romero, who twice has been among the three finalists for National Player of the Year, leading the way.

“You can’t deny what the statistics say,” Hutchins said. “I always say she’s arguably the best player and not just at Michigan but ever. She’s the complete package. Her idea of a slump is to have a bad weekend. She doesn’t understand what a slump is.”

Romero arguably is the best player in the country this season and is among 10 finalists for National Player of the Year.

“I have to say I’m too biased to answer,” Hutchins said. “I don’t look at everyone else’s stats, but I think she’s the best player in the country. There are a lot of players who are very good. She’s the complete package.”

Romero’s career is marked by consistency. She arrived as an impact player as a freshman and her production has never dipped, but always improved.

She holds two NCAA records — career runs and grand slams — is fourth in RBIs and slugging and eighth in home runs and walks. This season Romero, the three-time Big Ten Player of the Year, leads the nation with 1.41 RBIs a game and is third with 1.33 runs per game.

“You look at her numbers and I don’t think anybody is living up to what Sierra Romero is living up to this year,” said ESPN softball analyst Amanda Scarborough. “What makes her a more special player is that she backed it up with strong freshman, sophomore and junior years. This is not a year out of the blue.”

For most of 2015, every day was about softball for Romero. As soon as the season ended in Oklahoma City with the title game loss to the Gators, she was on her way to USA Softball for the summer.

She flew back to Ann Arbor from an All-Star series in Japan, her legs and mind were tired.

“One thing that Hutch did that was really weird for me, she kind of like suspended me from the team when I first came back,” Romero said, using air quotes around suspended. “She would not allow to come to softball for a month, during individuals (in late October) until after Thanksgiving break.

“She literally would not let me come back to the field. I wasn’t even allowed to watch practice. She wanted me to take a mental break because I didn’t get a chance to stop thinking about softball and sometimes you really need that. I would go up in her office all the time and beg her to let me come back and she would say, ‘No, you need a rest.’ The only time I was allowed back was for rehab and treatment. I’ve never had a coach tell me, go home and rest. It was weird.”

She used the time to focus on school.

“To her credit, she said, ‘What about my team?’ ” Hutchins said. “I said, ‘My job is to do what’s best for our team. What’s best is for you to get out of here.’ Some of the other kids didn’t buy into it off the bat, but they got it eventually.

“We wanted this to pay off at the end of the season. I wanted her to be able to miss softball and be edgy to get back. I don’t have any regrets over it. She understood it.”

Romero said the rest was beneficial.

“That break helped me forget about softball for a little bit and really just focus on getting myself better,” she said. “At the end of the day, it was for the team. If I wasn’t good to play then who was I going to help? I wasn’t going to help anybody.”

During the summer she dealt with a dislocated right shoulder suffered sliding and reinjured it taking a hard hit during a game against Michigan State. Most of this season she has been dealing with a back injury that affects her ribs and limits her ability to swing freely.

“I was going into the doctors probably twice a week to get my ribs popped back into the place,” Romero said. “I had to do that quite a few times because my ribs won’t stay in place. I keep doing the motion that’s making them come out of place, which is swinging. I really can’t stop swinging.

“During the season I was a little frustrated just because I felt so limited. I felt like I wasn’t swinging hard. There was a period where my home runs were down, and I was really being careful when I was swinging because I was afraid of that pain coming back.”

With the NCAA Tournament about to begin, Romero said her back feels great save for a bit of tightness at times. She is back to what she calls her “violent swing.”

No one talks about Romero without talking about her hands. They could very well be the quickest in the game and not just at the plate, but as a fielder, as well.

“She really is special,” ESPN analyst Michele Smith said. “She’s just got that natural ability and she comes with so many different tools and she can hit for average and power. The game happens so fast you have to be intuitive. She goes up to the plate with a game plan. When you have the ability to hit pitches that pitchers are going to throw for balls you jump into a whole different class. That’s where Sierra is.”

The smell of fear

“Then you’re like, ‘Oh, I just won,’ ” Romero said, smiling. “For the most part, I feel I know where the majority of people are going to pitch to me, and I know my strike zone. And I know that unless an umpire is not very good, I should be able to get on base or touch the ball, especially because I know my strengths when I’m hitting. I know areas on the plate I really don’t worry about because I know I can hit that pitch if I have to.”

She is analytical and strategizes constantly.

“Any player could be locked in, but there’s no question she’s elite and it comes naturally for her,” Hutchins said. “She learned to be locked in at a young age. She’s always been driven to hit the long ball, to try to hunt a pitch to hit the ball. She wants to hit the crap out of the ball. She doesn’t want to just make contact. She’s laser focused. I compare her to my dog, Marley. If I’m eating a chicken wing, he’s so locked in on it on it until you throw it away. Romo is like that. She’s on it.”

“I’ve seen every at bat, and it’s still her laser focus. I got to travel with the 2004, 2008 Olympians, and nobody is as laser-focused as Sierra. I’ve seen them all. Nobody. Nobody.”

Romero knows she’s good, but does she think she’s the best player in the country?

“I definitely think I’m one of the top players,” said Romero, whose younger sister, Sydney, is a standout for third-seeded Oklahoma. “I don’t know if I’m the best player, because I feel the best player is the best in every single category. I’m at the top of every single category, but one thing I like about my playing and something I’ve always been big on is being consistent. That’s one thing I can say about my four years here, I’ve been consistent.

Romero’s first and only college visit was Michigan in the dead of winter. Hutchins is still trying to figure out ways to find more eligibility for her.

ROMERO BY THE NUMBERS

2: Player of the Year top-three finalist

3: Big Ten Player of the Year

.961: Her fielding percentage this season

Tickets: The weekend is sold out.

Parking: Free parking is available in several lots near the Wilpon Complex.