Michigan changes its fortunes against SMU

Michigan used a strong first half and a 3-point barrage by Derrick Walton Jr. to trounce SMU.

Michigan changes its fortunes against SMU 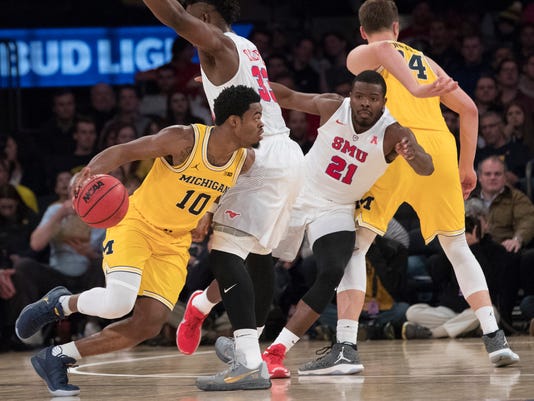 New York — The past two meetings between Michigan and SMU were ugly for the Wolverines.

Michigan went cold down the stretch in a painful 62-51 loss in 2014 and watched its defense get picked apart in an 82-58 thrashing last year.

The third time, though, Michigan turned the tables.

The Wolverines used a strong first half and a 3-point barrage by Derrick Walton Jr. to trounce SMU, 76-54, in the 2K Classic championship game Friday at Madison Square Garden.

Walton Jr. scored 23 on a career-high seven 3-pointers, Zak Irvin had 16 points and Muhammad-Ali Abdur-Rahkman added 12 for the Wolverines (4-0).

Walton, Irvin and Abdur-Rahkman were named to the All-Tournament team, with Irvin taking MVP honors.

“The last lost that we had to (SMU), we basically got punked throughout the whole game and we knew that we weren't going to let that happen this game,” Irvin said. “We came out with a chip on our shoulder and Derrick really started it on the offensive end.

“But collectively on the defensive end, we held them to 37 percent from the field. That's huge for us.”

D.J. Wilson emphatically swatted Semi Ojeleye’s shot on the first possession, sending an early message to SMU (3-1) that things were going to be different.

After going scoreless in the semifinal win over Marquette, Walton hit two early 3-pointers — the second on a high-archer before the shot clock expired — to help give Michigan an 8-2 lead less than three minutes into the first half.

Mark Donnal (nine points, five rebounds) tipped in a missed 3-point attempt by Walton before the senior guard made another 3-pointer from the wing to push the lead to 13-4 with 16:09 left.

"Personally, I felt like I let my teammates down by picking up two cheap fouls (against Marquette),” Walton said. “They did a great job without me. It just shows how good we are as a unit. I just wanted to be really aggressive and that was pretty much it.”

Michigan’s reliance on jumpers began to lead to empty possessions and SMU began ramping up its attack to the basket, converting back-to-back layups to cut it to 18-13 at the 11:05 mark. 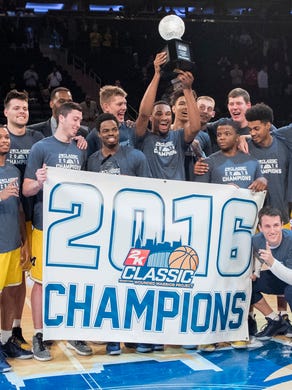 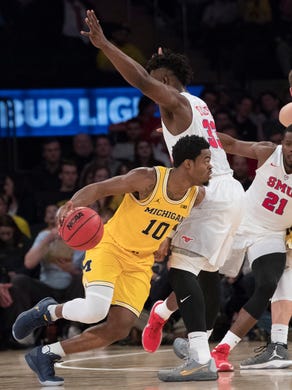 Irvin sparked a 6-2 spurt with a lefty lay-in and assist to a streaking Donnal for a dunk in transition before Jon Teske received his first serious minutes and hit two free throws to give Michigan a 24-14 lead with 8:13 left.

SMU continued its assault on the rim to close within 26-19, but Michigan pulled away with an 18-6 run over the final 6 minutes, 46 seconds of the half.

Walton started the flurry with his fourth 3-pointer to re-establish a double-digit advantage, 29-19, while Donnal drew charges on back-to-back defensive possessions.

Walton then fed Wilson on a backdoor cut for a two-handed slam and a chance for a three-point play. Wilson missed the free throw, but Donnal corralled the offensive rebound and later hit a 3-pointer to make it 34-19.

Walton connected with Wilson again on an outlet pass for a fast-break dunk before Michigan ended the half with an Abdur-Rahkman 3-pointer and Irvin bouncing in another as time expired for a 44-25 advantage at the break.

"We pretty much just trusted our offense,” Walton said. “We got too many weapons within our system that it's kind of hard to take away everything.

“We started the game and hit a couple shots. We knew that would open up our backdoor cuts and special sets that we call. I think tonight was a great example of what Michigan basketball looks like."

SMU came out firing in the second half, hitting two 3-pointers within the first minute to slice the deficit to 44-31.

Michigan coach talks about the importance of starting 4-0 and winning the nonconference tournament at Madison Square Garden.

Rather than panic, Michigan took a patient approach against SMU’s defense and it paid off. Abdur-Rahkman had a layup and 3-pointer and Irvin added two layups to extend the lead to 53-33 with 15:19 remaining.

Walton made two more 3-pointers — his fifth and sixth of the game — a little over a minute apart to balloon Michigan’s lead to 61-37 at the 11:03 mark.

The Wolverines poured it on, using Walton’s seventh 3-pointer and two free throws each from Duncan Robinson and Irvin to effectively put the game out of reach at 73-44 with 5:18 left.

“We're champions at The Garden. It's a great feeling for us all,” Irvin said. “We're excited, we worked so hard, our coaching staff worked so hard. It's just nice to be able to start the season 4-0 and keep the ball rolling.”