Michigan dominates from start to finish against MSU

Michigan played with a sense of desperation and manhandled Michigan State from start to finish.

Michigan dominates from start to finish against MSU 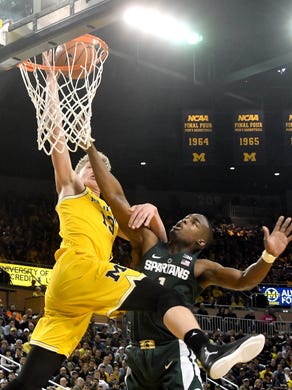 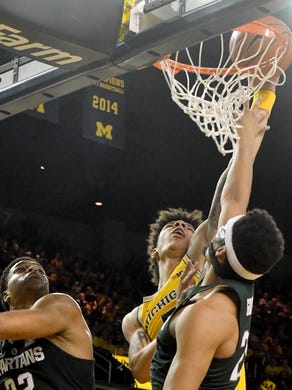 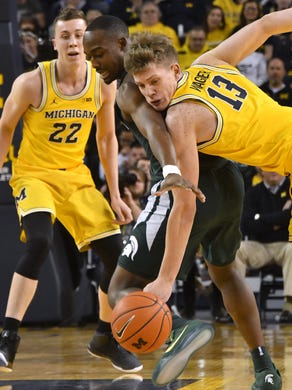 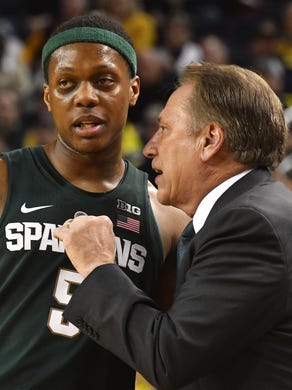 Michigan State's Miles Bridges looks for an opening in the Wolverines' defense during the first half. Dale G. Young, Detroit News
Fullscreen

Spartan freshman sensation Miles Bridges is all alone above the rim for this dunk. Dale G. Young, Detroit News
Fullscreen

Ann Arbor — Over the last three years, the Michigan-Michigan State game hadn’t been much of a rivalry.

On Tuesday night, it wasn’t much of a game.

Michigan played with a sense of desperation and manhandled Michigan State from start to finish in an 86-57 blowout Tuesday at Crisler Center to stop a five-game losing streak in the series.

Senior guard Derrick Walton Jr. continued his stellar stretch with 20 points and eight assists to help end a two-game skid for Michigan (15-9, 5-6). Moritz Wagner scored 19, Muhammad-Ali Abdur-Rahkman had 16 and Duncan Robinson added 10 off the bench for the Wolverines, which scored 30 points off 21 turnovers.

Freshmen Miles Bridges and Nick Ward scored 15 and 13, respectively, and Eron Harris had 10 for Michigan State (14-10, 6-5) as its modest two-game winning streak came to an end.

"I think before the game, the guys really banded together and they wanted to get this one for me,” said Walton, who recorded his fourth straight game with at least 20 points. “They played like it and I'm really appreciative of it all. Everybody played their heart out.

“We're a brotherhood and when we band together and play for each other, we're a whole different bunch."

Michigan threw the first punch and jumped out to a 9-2 lead less than three minutes into the game. Abdur-Rahkman and Wagner opened it with back-to-back layups, Walton knocked down a jumper and Wagner drained a 3-pointer from the wing as the Wolverines took advantage of Michigan State’s sloppy defense.

Ward scored six straight for the Spartans on a hook, two-handed jam in transition and a coast-to-coast layup to cut it to 9-8 with 15:20 left in the first half.

Michigan swung back with a flurry of 3-pointers — one by Zak Irvin and two by Abdur-Rahkman — and a three-point play by Mark Donnal to push the lead to 21-13 at the 10:57 mark.

After Michigan State cut it to 23-19, Michigan delivered the early knockout blow with a 32-10 run to end the half as the turnovers piled up for the Spartans.

The Wolverines rattled off 12 straight points as Wagner split a pair of free throws and had a layup, Walton hit two 3-pointers and freshman Xavier Simpson drained a deep ball to start the spurt and make it 35-19 with 6:26 left in the half.

Harris stopped the bleeding for Michigan State with a 3-pointer, but only temporarily.

After a few chippy moments — Michigan’s D.J. Wilson picked up  technical after getting in Kenny Goins’ face following a one-handed dunk and Ward was hit with a tech after tripping Wagner heading into a timeout — Michigan finished with a flourish.

Abdur-Rahkman connected on a layup, Wagner threw down an and-1 dunk and Robinson hit a corner 3-pointer before time expired as the Wolverines scored the last eight points en route to a commanding 55-29 advantage at the break.

"Believe it or not I don't like getting huge leads,” Michigan coach John Beilein said. “It is really hard to coach the second half, but everything was clicking.

“How can you keep attacking without giving them opportunities to come back? Whenever you have a huge lead like that, just don't let these kids take their foot off the pedal right now."

The Wolverines didn’t. Michigan’s offense kept rolling and its lead swelled to 59-29 roughly a minute into the second half after Wagner hit a layup and Wilson threw down a soaring one-handed dunk in transition following another Michigan State turnover.

Michigan State chipped away with a 14-5 run with six points from Alvin Ellis III (a free throw, offensive putback and 3-pointer), a 3-pointer from Lourawls Nairn, a three-point play by Ward and a Bridges jumper to cut it to 64-43 with 13:07 to play, but it merely put a small dent in the deficit.

Abdur-Rahkman hit two free throws and Robinson added a layup to push Michigan’s lead back to 25, 68-43, at the 11:43 mark. Michigan State never threatened the rest of the way.

"Very disappointed. It started out bad and got worse,” Michigan State coach Tom Izzo said. “Our freshmen, they looked like a bunch of freshmen against a bunch of juniors and seniors. Give them credit. They had a purpose.

"You look at those seniors and they lost four or five times (in the rivalry) and I thought they played with an incredible passion. Our freshmen did not match that."