Irvin breaks out of slump in nick of time for Michigan 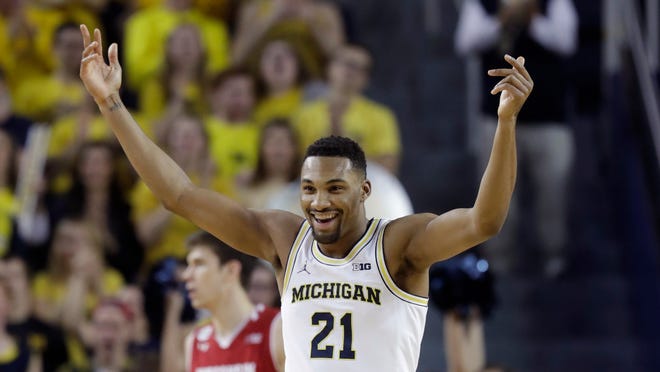 Ann Arbor – Where was Zak Irvin?

It was the lingering question Thursday night as the senior forward was mired in one of the worst shooting slumps of his career.

But Irvin reemerged. He shot 6-for-12 from the field and finished with 18 points, five rebounds, three assists and two steals in Michigan’s 64-58 upset over No. 11 Wisconsin at Crisler Center.

“It’s just a mental block. At that point in time you’re just telling yourself ‘I hope I don’t miss it,’ ” said Irvin, who had 13 points and shot 4-for-31 over the last four games. “I just had to change my whole mindset and just think every shot I take is going to go in. That’s the mentality I had tonight, just getting back to my usual self and it worked well for me.”

Irvin split a pair of free throws and converted a layup in the first four minutes against Wisconsin but appeared to not be completely over his struggles when he airballed a corner 3-pointer on his next shot attempt.

“When he threw that airball and missed by four feet, I don’t care. I told him shoot it when you’re open,” Michigan coach John Beilein said. “It’s going to be very hard for us to have success this year if we shut him off. He’s scored 1,400 points. We don’t say, ‘OK, you don’t know how to score anymore.’

“You don’t forget that. It’s riding a bike. You might fall down a couple times but you just got to keep going with him and going to him and build another package around him.”

Yet everything seemed to click for Irvin after he banked in a 3-pointer to beat the shot clock and shrugged his shoulders going back down the court, cutting Wisconsin’s lead to 42-41 with 12:50 to play in the second half.

“That kid works so hard. He’s been going through a tough stretch and to be honest I think people make a big deal out of it even though people do go through stretches like that,” sophomore center Moritz Wagner said. “I’m so happy that even though he banked it, I don’t care how, but it was such a relief that’s he’s back. He’s here. He’s making shots, making big plays.

“The one thing about Zak is he never loses his energy, even though he misses shots. When he misses shots, he just comes up to us and gives us his natural energy, which is very important for a team like this.”

Irvin went on to hit three of his final five shots, including a clutch mid-range jumper that gave Michigan a 45-44 lead with 11 left and a 3-pointer and two-handed dunk that added some breathing room.

“It’s a long season, man. You have ups and downs. That’s just the way it goes and some are worse than others,” senior guard Derrick Walton Jr. said. “He was able to make some shots and he helped us down the stretch.

“(Wisconsin) wasn’t going to let me do anything tonight. Again, kudos to him. He had a tough two-, three-week stretch.”

Two games after joining Gary Grant and Jalen Rose as the only players in program history to record at least 1,000 points, 400 rebounds and 400 assists, Walton formed a club of his own.

By grabbing a defensive rebound with 9:56 left in the first half, Walton became the first Wolverine to reach 1,000 points, 500 rebounds and 400 assists.

“It’s extremely humbling. I can’t put into words,” said Walton, who finished with five points, eight assists and five rebounds. “It’s an accolade that I’ll remember for the rest of my life and my career. All I can say is thank you to the guys that helped me get to it.”

When freshman center Jon Teske checked in for Wagner with 8:29 left in the first half, Michigan was up by six. By the time Teske checked out at the 6:19 mark, Wisconsin had scored six straight to tie it.

Rather than turn to senior Mark Donnal, Beilein wanted to give Teske more game-time experience. But it turned out to be a brutal two-minute stretch during which Teske picked up two fouls, committed a turnover and allowed Wisconsin’s Ethan Happ to score six points on two free throws, a fast-break dunk and offensive putback.

“(Happ is) such a high IQ player. He just saw opportunities with him,” Beilein said. “I’m trying to get Jon as much run as we can so he can learn on the fly. You can’t learn in practice as much as you learn in a game.

“I’m going to put him back in again in the next game. He’s got to get out there, experience these things and see it on video so he can learn.”

For an extended stretch of the second half, Wagner was nowhere to be seen on the bench. Instead, he was off to the side on the stationary bike with a towel draped over his head.

Wagner said there was nothing wrong with him physically and he was just trying to stay loose.

“I’m not old but if I’m on the bench for five minutes or more I just feel very tight,” Wagner said.

Beilein joked that Wagner must have seen Dallas Mavericks star Dirk Nowitzki do it Wednesday night when they played the Pistons at The Palace. Wagner was at the game and met Nowitzki afterward.

“As he tries to interpret what I’m saying, he’s really good at it. But on the fly, there’s some interesting things that come out, so I’m not going to ask why he’s on it. He’s on it, he’s staying loose, it’s OK. Nothing wrong.”