Wilton Speight won’t be specific about the injury but said the shoulder is “back to 100 percent.”

Ann Arbor – Wilton Speight spent some time in the San Diego area last summer with his quarterback guru Steve Clarkson, with whom he has worked since high school, focused on developing confidence.

Speight, Michigan’s starting quarterback last season, a few weeks ago was out west with Clarkson again. There he challenged himself in numerous drills with Heisman Trophy winner Lamar Jackson and UCLA starter Josh Rosen as he prepares for Michigan’s preseason camp, where he will compete with John O’Korn and Brandon Peters.

“This time I went out and was extremely competitive with guys like Josh Rosen and Lamar Jackson in those competitive drills – throwing at targets, stuff like that,” Speight said last Saturday after Michigan’s high school quarterback camp. “Just went into overdrive in trying to beat those guys and stack myself against the best of the best in the country and won a couple things. It was a good time.”

Speight has diligently worked on developing the physical aspects of his game, and also mentally through studying film. At the halfway point last season when the Wolverines had a break in the schedule, he went back and watched every one of his plays from the first six games.

After returning from Michigan’s trip to Rome, Speight continued to watch every play from the entire season.

“I watched a little bit before spring ball, as well, but I got back to America and immediately went and clicked on the film and started watching that and knocked it all out,” Speight said. “Watched every game twice. There were certain plays in a few games at the end of the year that I wish I could have changed, but that’s what you live and learn from and you get better.”

Speight suffered an injury to his left (non-throwing) shoulder late in the loss at Iowa and missed the final home game against Indiana before returning to face Ohio State in the regular-season finale, and then played in the bowl game.

He won’t be specific about the injury but said the shoulder is “back to 100 percent.” He also won’t say if he had surgery and turns coy when the subject comes up.

“I can’t remember,” Speight said, smiling. “That was way back in January, February, December.”

Speight said he and Michigan coach Jim Harbaugh agree that specifics about his shoulder injury are no one’s business.

But he does know that the quarterback competition is open for anyone to debate. Speight emerged from the spring after a self-described lackluster showing in the mid-April spring game at Michigan Stadium with the edge over O’Korn and Peters.

Harbaugh has made it clear that the competition will be ongoing during camp that begins July 31, and Speight is carrying himself with confidence, knowing he has a full season of starts under his belt while also knowing that he has things to correct from the spring.

“It’s a competition every day,” Speight said. “You talk to guys like Tom Brady, Peyton Manning – every day is a competition. It doesn’t matter if you’re fifth string or returning starter. I don’t think about the spring game in a way that would affect me. I prepare the same way every day, and that’s to be the starting quarterback at Michigan. That’s how I was as a fifth-string quarterback and that’s how I am now as a starter.”

With primary receiving targets Amara Darboh, Jehu Chesson and Jake Butt gone, Speight and the quarterbacks are adjusting to the influx of young receivers. Donovan Peoples-Jones and Tarik Black enrolled early and were able to practice in the spring, but Nico Collins and Oliver Martin are newcomers.

Summer seven-on-seven drills are always important during offseason conditioning, but Speight has been focused on developing timing with the receivers, including sophomores Kekoa Crawford and Eddie McDoom, among others. 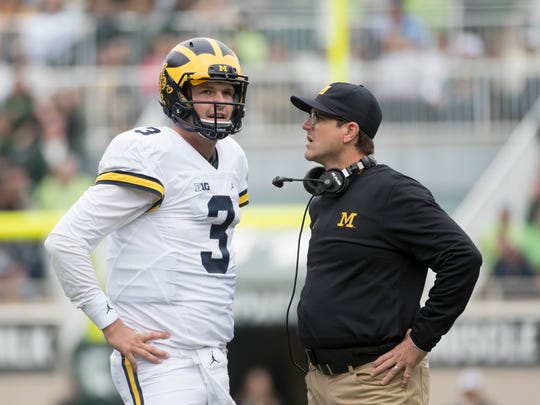 “We’ve been going a few days a week,” Speight said of offseason drills. “The chemistry is developing. We’re getting the timing down. We’ve had a good summer so far.”

“How they come out of their routes, how they operate at the line of scrimmage,” he said. “It’s just the little details we’re starting to figure out as a quarterback-wide receiver combo.”

Also working with Michigan’s quarterbacks is Scott Turner, an offensive analyst who spent the last three seasons as the Minnesota Vikings’ quarterbacks coach.

“Both relationships are developing,” Speight said. “(Hamilton is) the man. I learned an incredible amount from coach Fisch in two years and I’m learning an incredible amount with coach Pep in the first four, five months. I just feel very blessed to be a quarterback here and be a product of my environment and just learn as much as I can.”