Several Michigan football players have taken to yoga during the offseason to help with flexibility. 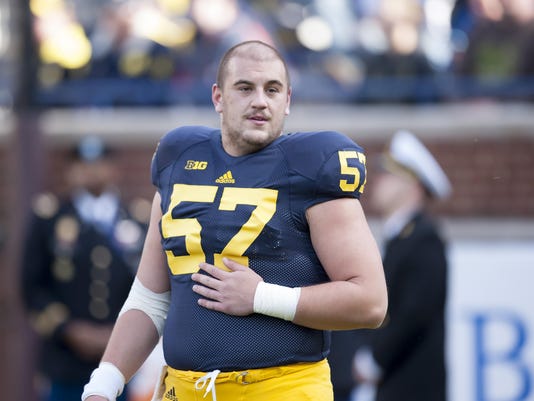 Ann Arbor — Several Michigan football players have taken to yoga during the offseason to help with flexibility.

Players have several options on Wednesdays during summer workouts and conditioning. They are called “improvement days,” a creation of strength coach Kevin Tolbert.

“It’s your day to work on something you’re not good at, whether it be strength, speed, flexibility,” senior offensive lineman Mason Cole said.

Cole uses his improvement days to work on strength, but Kugler needs more flexibility, so he’s among the regular yoga participants.

“Me and (fullback Henry) Poggi are probably the biggest yoga guys, believe it or not,” he said. “I’m a big child’s pose because I like laying there. I’ve got terrible hips.”

“A lot of people do it,” Kugler said.

“Personally, I don’t like yoga, but (defensive line) Coach Matti (Greg Mattison), sometimes he makes me go,” Gary said, smiling. “Now I’m starting to get into it, so I’ll be doing a little bit of yoga. But when I can get away from it, I try to get away from it. He just gave me a speech saying it’s only going to make you the player that you want to become. Once you hear something like that, you can’t say no.”