UM's full-speed FB Ben Mason ‘not afraid of anything’

Mason moved from linebacker to fullback, much to the delight of Michigan’s running backs.

UM's full-speed FB Ben Mason ‘not afraid of anything’ 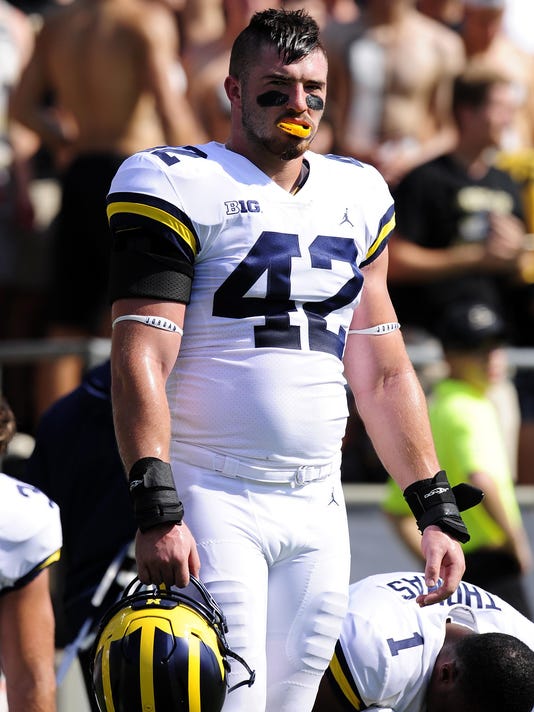 Ann Arbor — In preseason camp, Michigan coach Jim Harbaugh raved about the physical play of freshman Ben Mason, who arrived as an early enrollee and moved from linebacker to fullback.

“He was made to be a fullback,” Harbaugh said before the season.

“I just like football, so whatever I can do,” Mason said Tuesday after practice. “I definitely feel at home. I feel I have the skills to do the job. It comes down to playing as hard as you can every play and having that mentality to give up your body for the team. “

Michigan does not have a game on Saturday and calls this week “improvement week.” The Wolverines will face Michigan State on Oct. 7 in a night game at Michigan Stadium.

Mason is considered one of the strongest players on the team. Harbaugh, during a radio interview in May, said Mason “goes forward and hits people better than anybody I’ve ever seen.”

Harbaugh believes the fullback position directly influences the toughness identity of the offense, and Mason certainly exudes toughness. He benches 425 pounds and squats 530.

“I think I’m a different guy,” he said. “You’ve got to be different to play fullback. Not a lot of guys are willing to put their body out there the way a fullback has to.”

Harbaugh said in the offseason that the running backs, particularly sophomore Chris Evans, were begging him to move Mason to fullback because they also saw his potential to be an enormous asset to the run game.

Mason has played in all four games, mostly on special teams, and he already feels like a seasoned player.

“I’ve only played four games now. I’m definitely experienced now,” said Mason, who is from Newtown, Conn. “I would consider myself a veteran after four games.”

Asked why he already feels like a veteran player, his response was immediate.

“My mentality,” he said. “I’m not afraid of anything.”

When Mason was on defense in the spring, the running backs weren’t exactly afraid of him, but they celebrated when they found out he would be joining their position group.

“He’s one of the hardest hitters on the team,” senior fullback Khalid Hill said earlier this season. “He definitely comes downhill and brings a lot with him.

“We used to do this pass-rush drill last (spring) and Ben was on defense, so he would bull rush every player. We used to hate it as backs. We got word he was coming to the running backs room, it was the best thing ever because we didn’t have to worry about him anymore.”

Mason is looking forward to become a bigger factor at fullback.

“It’s right where I want to be,” Mason said. “Anything I can do to help the team, I’m willing to do.”