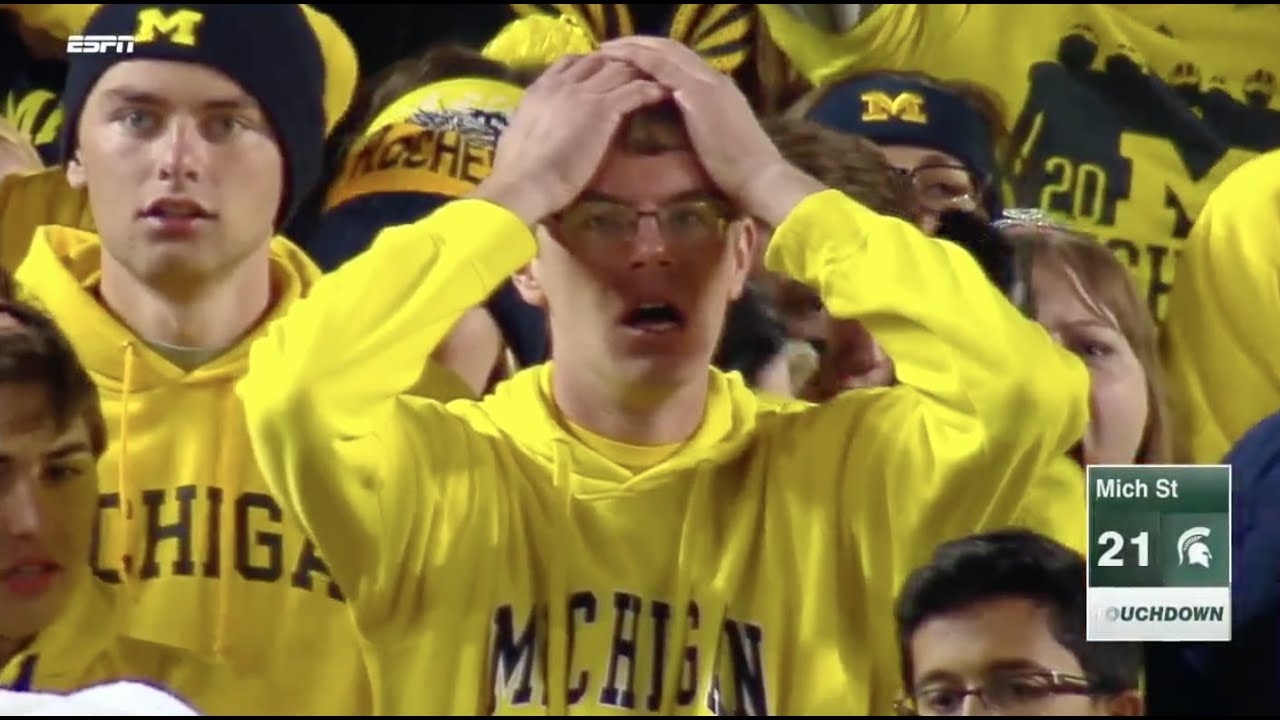 For Michigan State fans, the final 10 seconds of the game at Michigan two years ago is video-loop worthy. For Michigan fans, it was among the more dramatically dreadful moments in its college football history.

In the most famous 10 seconds of the heated in-state rivalry, Michigan punter Blake O’Neill mishandled a knee-high snap from Scott Sypniewski. As the Spartans swarmed him, O’Neill picked up the ball and tried to kick it. The ball popped loose. Michigan State’s Jalen Watts-Jackson snagged the ball and ran 38 yards for a touchdown in the stunning 27-23 Spartans victory at Michigan Stadium.

Michigan won last year’s game at Spartan Stadium, but Saturday’s prime-time meeting will be the first at Michigan Stadium since that craziest of finishes.

O’Neill, an Australian, lived in Tampa last year working in real estate development and would often see the play.

“I’d have ESPN on while I was getting ready for work and there I was, back on the screen,” O’Neill said in a telephone interview from Australia.

On the Tuesday after that game, O’Neill addressed the media and carried himself with dignity and confidence. There had been a number of threats directed at him posted on social media, but he did not whither under that pressure.

In fact, while there was so much media focus on the negative reactions to that botched play, O’Neill turned his focus to the support he received. He still is moved by the amount of “good wishes.”

“You do find a silver lining,” he said. “My prevailing memory from that time was the sheer outpouring of positive messages and support. Emails, letters, kids at school drawing pictures for me. That’s great as a player, especially a foreign player who was in for a year, to receive that.”

Two years later, the Wolverines who were on the field that night remember everything they were feeling. Most were already celebrating.

“Just kind of sure the game was over that point, but it wasn’t,” senior Maurice Hurst said.

“It sticks a lot, especially being there and experiencing a lot of that postgame sadness and seeing all the players run on the field and just celebrating a long time after we were done,” Hurst said. “It hurts and it sticks.”

Jon Runyan was redshirted that season and wasn’t playing, but he still feels the pain.

“The game two years ago, I’m pretty much scarred by that,” Runyan said recently. “I still remember being on that sideline, 10 seconds left, knowing we were about to win the trophy and we just had to punt the ball away. It happened. It just adds to the Michigan-Michigan State rivalry. That’s what’s so good about it. That’s just something that’s been stuck in my head.”

O’Neill understands what the Michigan-Michigan State game means. He also knows the Wolverines want to erase the 2015 game on Saturday night at Michigan Stadium.

“These kinds of rivalries make college football exciting and fun and the firebrand football we like to watch,” O’Neill said. “I have no problems at all being part of stoking that fire.”

Most were impressed with how well O’Neill handled the situation a few days later in his first meeting with media. But that is how kickers are wired, whether they’re from Australia or the United States.

It’s the approach that you understand what happened and why it happened, learn from it, and move on.

“What we always said is if you have a bad kick, you have to flush the toilet,” O’Neill said. “I think the big thing is, American football is an incredible thing when you look at the sheer interest on the game. That’s one of the great positives of a school like Michigan. A guy like me from Australia can go out there and play in front of 100,000 people. If you boil it down, mistakes happen every other play depending on the position. That’s the beauty of football, you do the best to nip and tuck and learn your craft as best you can.”

He received his master’s degree at Michigan and said he built unforgettable relationships.

“It was a whirlwind experience,” he said of his time with the Wolverines. “To learn the process with Bax (coach John Baxter) and to play under a coach like (Jim) Harbaugh was an incredible experience. To be in a town like Ann Arbor, I made some lifelong friends and got my masters in sports management. It ticked a lot of boxes.”

O’Neill finds it hard to believe it’s been two years since he became part of one of the more memorable finishes in college football history. He and Sypniewski are in the same fantasy football league, and O’Neill introduced him to his Australian friends.

“He said, ‘Hey guys. I’m the guy who snapped the ball to Blake that he decided to drop,’” O’Neill said with a laugh.