Hutchins, 61, has led the Wolverines to 23 consecutive NCAA Tournament appearances, and 25 overall. 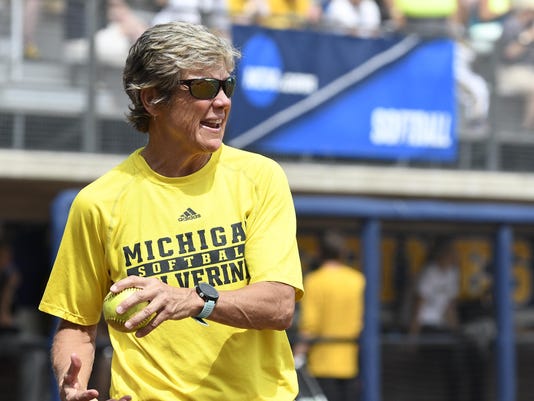 Michigan softball coach Carol Hutchins, in what could be the final contract of her legendary career, will earn more than $500,000 annually under a new, five-year deal signed this past summer.(Photo: Lon Horwedel / Special to Detroit News)

Michigan softball coach Carol Hutchins, in what could be the final contract of her legendary career, will earn more than $500,000 annually under a new, five-year deal signed this past summer.

That’s a significant jump up from her last deal, which paid her $237,537 in base pay for the 2016-17 season. The News obtained the contract the same day it received that of baseball coach Erik Bakich, who also is getting a significant raise under his new, five-year deal, to $400,000 annually.

Bakich has said since arriving at Michigan that his goal is to one day get the baseball program in the same shape of the softball program, and he acknowledges that’s going to take quite a bit of time.

Hutchins, 61, has led the Wolverines to 23 consecutive NCAA Tournament appearances, and 25 overall since taking over in 1985. That includes a national championship in 2005.

“I told Hutch, she can’t retire,” athletic director Warde Manuel said, laughing, in an interview with The News this summer. “And for how long she’s been the coach, what, 32, 33 years, you know, she looks like she can go another 30.

“She is a legend in Michigan history and a legend in softball and just a terrific person.”

The contract also includes a rollover clause, adding a year on to the back end every July 1, with an increase of 2 percent in base pay from the most-recent contract year. That rollover can be halted by either party. Hutchins’ deal includes no buyout clauses, which is no surprise, given she’s highly unlikely to leave Michigan, where she is 1,527-491-5 and the winningest coach in history.

Hutchins’ contract also appears to start the process of preparing for her retirement.

Under the terms, “upon conclusion of your coaching career,” Hutchins can stay in Michigan’s athletic department as an assistant to the athletic director at an annual salary of $75,000 per year, for 20 hours of work or fewer per week. If Michigan elects to decline her services, it would pay her $225,000 before Year 1, $150,000 before Year 2 and $75,000 before Year 3, depending on when Manuel would make that decision.